100 Things Every WNYer Should Do: Attend the Porter Cup

His name was A.W. Tillinghast. They called him Tillie. Tillie, who died in 1942, was one of the world’s great golf course designers, and one of three who created the dreamlike greens at the Niagara Falls Country Club in Lewiston.

Tillie was rich but he wanted everyone, not just the elite, to discover the beauty of golf. Surely he smiles down on the Porter Cup. Founded in 1959 and played on his Lewiston course, it one of golf’s most prestigious amateur competitions. It is also free.

I’d never liked golf, even though I have a niece, Emily Mills, who is a golf champion at Rutgers University. I had no idea how to watch golf. Arriving Wednesday at the stately club, which dates to 1901, I questioned the nearest spectator, who turned out to be Gary Leo of Amherst. 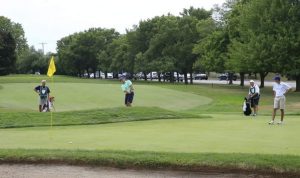 Billy Gaffney of East Amherst blasts out of the sand trap on the 18th hole during play this week at the Porter Cup at Niagara Falls Country Club. (Harry Scull Jr./Buffalo News)

“The best in the country, the collegiate and the amateur, are here,” he whispered. “The beauty is that here we are 15 or 20 feet away.”

Leo plays golf as a hobby, and never misses the Porter Cup. He was whispering so as not to break a nearby player’s concentration. We made friends, as Western New Yorkers do. A stranger in this paradise, I was grateful for his guidance.

Golf is as leisurely as the day is long. Even rain is part of the rhythm.

“Weather delays happen all the time. Weather’s a part of the game,” said club member Steve Dillon, also waiting out the cloudburst. A time-out, he said, affects players in various ways. “When they’re hot, they’re going to lose their steam. The guys for whom it’s not going so well see it as an opportunity.”

The Porter Cup, Dillon said, is still run as it was a half century ago. Players enjoy planned evening activities – the Maid of the Mist one night, a barbecue the next. They stay in private homes.

“It’s awesome,” said Ryan Celano, one of two players from Florida staying with Dillon’s family. “The community is behind it. They have everything lined up for you.”

It’s rare to have players and audience so close. But Adam Wood, a player from Duke University, said it’s not an issue.

“All of us have played an awful lot of golf,” he said.

The sky cleared. The tournament resumed in tropical heat.

Good cheer, I saw, was par for the course. Players tote their own clubs. They walk with the spectators over the greens and across the highway. Everyone thanks the officer who stops the traffic.

“It’s very much a gentleman’s sport. Very rarely do you find someone with a hot temper,” said Dalena Elliott. She was cheering on her husband, Gene, who won the Porter Cup in 1998. “I sometimes caddy for my husband. He never loses his cool.”

That’s admirable, because the pressure can be great.

Golfers say the Porter Cup is inspiring. Older players shine with their skill and experience. Younger players are worth watching because there’s a good chance you are seeing a future great. (Maybe you’ve heard of Phil Mickelson? He won in 1990.)

Much depends on the moment. Is the grass damp or dry? What about the wind? Even the time of day can make a difference.

Charmed, I found myself concentrating – and easing into the slower pace of an earlier era. Cicadas sang in the trees. Birds tweeted. Hawks wheeled overhead. The vistas changed depending on where you stood.

“They make it look so casual,” Leo said. “But it’s anything but.”

Later, I marveled at a photo of a young Tiger Woods, playing in the Porter Cup in 1994. And the Porter Cup itself – huge, shining, inscribed with the names of champions. I began bragging about my niece, and how she should be in the ladies’ Porter Cup, and –

How did this happen? When did I become a golf fan?

I guess I have Tillie to thank.