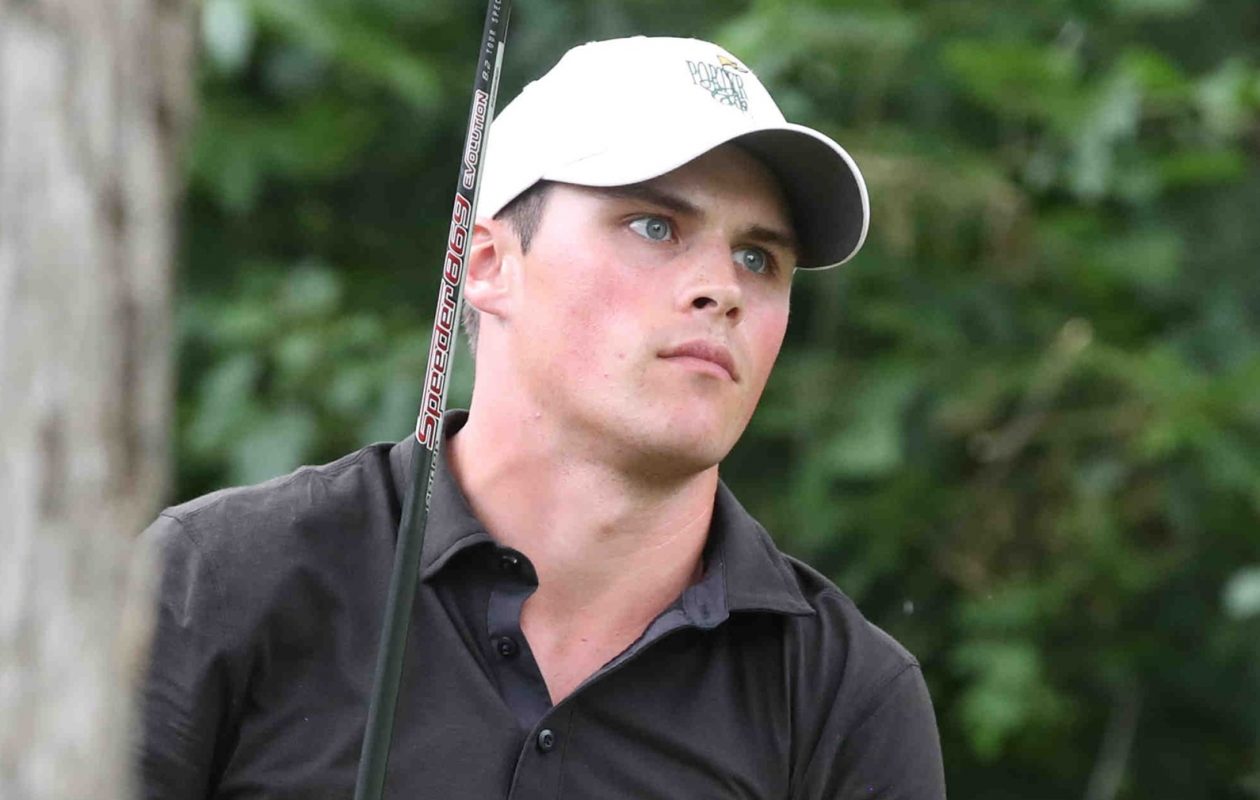 Gavin Hall watches a shot from behind a tree during the final round of the 2017 Porter Cup (James P. McCoy/Buffalo News)

The framed letter has been hanging on a wall in Gavin Hall’s bedroom in Pittsford, a continuous reminder for the past seven years. He was 15 years old and coming off a second-place finish in his first Porter Cup appearance when an ordinary envelope addressed to him arrived in the mail.

“It said ‘great playing this summer’ and explained how important it was to go to school and get your education,” Hall said Saturday after finishing third in his sixth and final Porter Cup. “It was really, really special. It was probably the best letter I’ve ever gotten. He signed it, too, which was cool.”

The King would be proud of Hall for the way he has conducted himself since that letter arrived. He did get an education at the University of Texas. On Saturday at Niagara Falls Country Club, he carried himself with the class and dignity Palmer exemplified as the people’s champion throughout his legendary career.

Palmer’s single act of kindness, taking the time to write a letter to an unknown teenager, had a profound impact on Hall. The 22-year-old knows kids across the Upstate New York are watching him. He hopes to set an example the way Palmer, who died last September, did for the generations that followed.

“He’s a role model to this day,” Hall said. “He’s a guy I would like to emulate just with his style, the swagger he carried around the course and the way he handled the people. Rarely do you ever hear anyone say anything bad about that guy. You never do.”

Hall caught a glimpse during the four-day tournament of what Palmer endured every week under considerably tougher conditions on the PGA Tour. Hall was the overwhelming favorite among fans who knew his history, how he had played well in the Porter Cup for years but never quite well enough to win.

The trend continued Saturday. Hall entered the final round tied for the lead with three others. He was playing in the last group before the largest gallery. He assembled another solid round en route to 68, making him the only player in the tournament to shoot under par in all four rounds. And it still wasn’t enough.

Hall ran into a buzzsaw Saturday in Brandon Wu, who fired a 6-under par 64 and won the tournament by three strokes over Christopher Petefish. Hall was four strokes back after shooting 69-67-69-68 in the four rounds. Last year, he lost a four-stroke lead in the final seven holes. This time, he spent the last seven holes trying to catch up.

“I feel like my game is there,” Hall said. “It’s certainly sharp. I’ve put a lot of work into it. To play well with the expectations that were put on me, that was huge. I had a lot of pressure to play well. To play well, I’m happy that I did. My game is right there. I’m so excited for the next three events.”

Hall graduated from Texas and is likely headed for the Web.com circuit next season. The next step for the former second-team All-American is making the U.S. team for the Walker Cup in September. He already was being considered and improved his chances in the Porter Cup.

His fate could depend on how well he played in his next three events – the Western Open, the New York State Amateur and the U.S. Amateur. If he wins any of them, he’ll likely nail down a spot. He could still be chosen if he plays well in all three but fails to win any of them. Newsflash: Winning golf tournaments is difficult.

“Gavin has a lot of tools and is a very good player,” said coach Jean-Paul Hebert, who coached Hall for four years as an assistant at Texas. “Golf is tough. Sometimes, it’s tough to get over that hurdle and just win. Sometimes, when you win a tournament, you tend to win some more. It’s hard to win. In golf, if you consider one guy wins and everybody else loses, it’s tough. But second or third should be celebrated.”

Wu made winning look easy. He was spectacular with his putter, riding his magic wand to the second-best closing round by a champion in the tournament’s 59-year history. He made six birdies, including four on the back nine while distancing himself from the field, and no bogeys in the final round.

Every time Hall attempted to apply pressure, Wu responded. Hall dropped a wedge within 7 feet on No. 10, and Wu answered with a wedge that spun back 2 feet from the hole. Hall missed a 10-footer on No. 11, and Wu made a 20-footer. Hall drove the green on No. 15 and two-putted for birdie while Wu took a conventional route and made birdie with an 8-footer.

“The best in the world win 10-15 percent of the time,” Hall said. “It’s not like we’re playing one other guy. People don’t realize how hard it is, but that’s fine. We put on a good show. Brandon made some ridiculous putts. Two-under wasn’t good enough, but I felt like I have myself enough chances to capitalize. I had a lot of looks at it.”

In his six Porter Cup appearances, Hall finished second twice, third twice and eighth twice. No player in history has played that well without winning, which is why he was hardly dejected when walking off the course Saturday. He congratulated Wu, was gracious afterward and spent time with kids waiting for him behind the 18th green.

Hall has the talent and temperament for a successful PGA career. That much has been obvious since he was 15 years old. Perhaps that’s why Palmer took the time to write him. The kid received the message. He may not be back at the Porter Cup, but he’s hoping to play again before his family and friends – much closer to home.

“I’m just beginning,” Hall said. “The next journey is ahead of me. Hopefully, a lot of these fans can come to the 2023 PGA at Oak Hill.” Country Club. “I’ll be right in the prime of my career. It could be pretty special.”