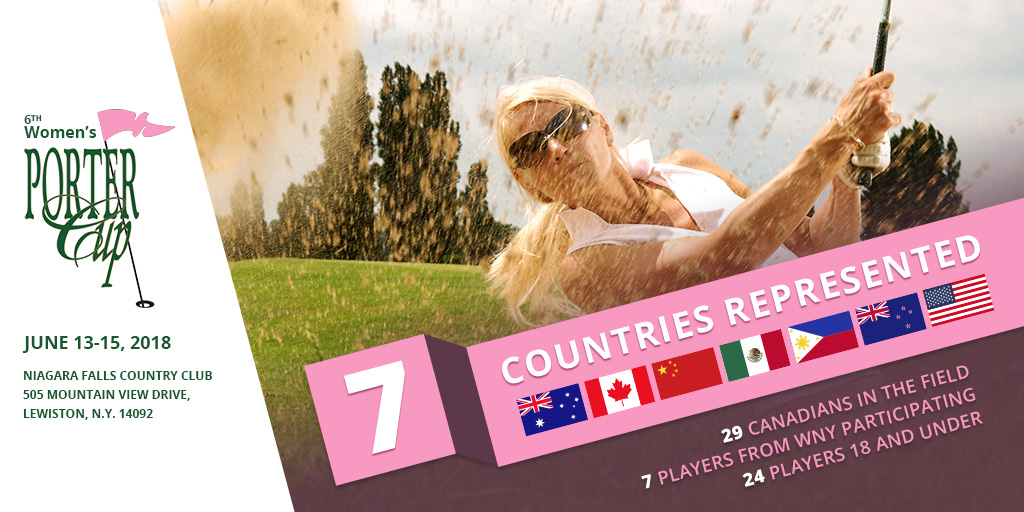 Everyone in Lewiston knows about the prestigious Porter Cup and the excitement it brings to the area. Coming June 13-15, the fun begins as the sixth Women’s Porter Cup will begin play.

The Women’s Porter Cup brings some of the best female amateur golfers from around the world to Niagara Falls Country Club to compete and to try and bolster their golf resumes.

This year’s field of women comes from the likes of Australia, China, Canada, Mexico, the Phillipines, across the United States and even some locals.

Executive Director of the Porter Cup Cassie Stein said the 2018 field could wind up as the most hyped up roster of golfers in the six-year history.

“We’re really excited to get this year going,” Stein said. “We have good players coming in. The full Canadian National Team is coming in and they’re really good. They have a girl, Maddie Szeryk, from London, Ontario and she’s ranked No. 19 in the world according the World Amateur Golf Rankings.”

Stein added Lei Ye, of Shanghai, China, will also be golfing in the tournament and she recently played in the LPGA U.S. Women’s Open as an 18-year-old.

The Women’s Porter Cup, in only six years, truly has expanded and gone global, as 36 of the golfers in the field will travel abroad to Lewiston to play. Stein said it shows how the game itself is really evolving worldwide.

“Golf has become more global. We have a group coming from Australia for the first time and it’s a step in the right direction for the Women’s Porter Cup. The golfers are some of the best in the world and that’s why we have them here,” Stein said.

Amongst all the national buzz, Lewiston will have a local in the tournament, as Victoria Parker will play in her own backyard. Also close to home, Maren Cipolla, Allison Spara and Julie Murphy of Amherst, Elena Lopez of Clarence, and Chelsea Dantonio of East Aurora will all compete in the tournament.

The ages of the golfers differ from around 16-37 and to see the youth of the tournament come participate and grow as golfers is something Stein said she enjoys.

“We have a young field and it’s the next generation of LPGA golfers,” Stein said. “It’s a unique experience to see these golfers come to the Porter Cup and to remember their Women’s Porter Cup experience down the road. It’s really cool.”

The tournament is free to the public to attend and watch and Stein said attendees can expect some stellar skills.

“You’re going to see spectacular golf shots,” Stein said. “The women are so accurate. If you tell them to aim for that tree, they’re going to nail it dead on. They just have beautiful golf swings and I encourage everyone to come out (and watch). They really are just impeccable.”

For a full list of participants in the sixth Women’s Porter Cup, visit the tournament’s website at portercup.com/womens-division.