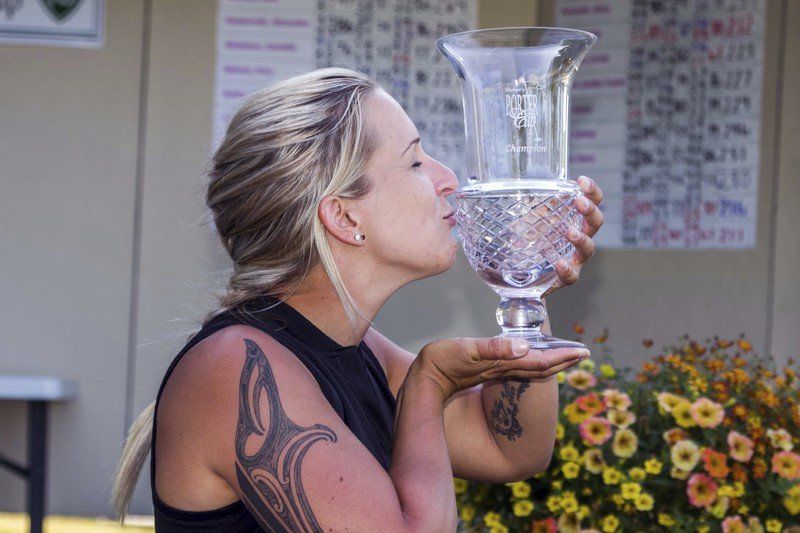 LEWISTON — When Zoe-Beth Brake came to the United States five years ago from New Zealand, she brought a passion in golf.

Tournament Director Brian Oakley said Brake was his first international recruit that he introduced to the Women’s Porter Cup in its inaugural year in 2013. It’s only fitting that she became the first returning player to win the tournament on Friday when she shot a 5-under 67 to finally break through in her sixth try.

“I’m so stoked,” Brake said. “It feels so amazing and I’m finally glad to win it for the people here.”

Oakley was just as excited.

“It’s so rewarding,” Oakley said. “You can’t imagine after six years that the international recruit that you first introduced to the tournament (would win). … It’s so refreshing to have somebody like that, that will carry that cup.”

Brake led all day in Friday’s final round, finishing at 8-under for the tournament and three strokes clear of the field. She went in tied at 3-under with another international player, Shanghai’s Lei “Angelina” Ye. Behind Brake at the end, Maddie Szeryk (London, Ontario) shot her second straight 67 to finish 5-under and in third was North Carolina’s Anna Redding with a 4-under 212.

Though Brake led all of Friday, it was still a mental challenge. Brake is incredibly tough on herself in competition. When she called up her caddy, Alex Conti, to carry her clubs, he agreed on one condition: “You can’t beat yourself up,” he recalled telling her.

This year was the first competitive tournament Brake’s played in since last year’s Porter Cup. She went through a back injury last year and wasn’t able to practice at all during the winter. And with her current job as a teacher, she essentially was out on the course only when she had time to.

Before each round, she wrote on her hand “shine bright.” That was a reminder she got from her mother to think of a happy place whenever she was down on the course.

Brake didn’t card a single bogey on Friday. She hit five birdies, two on the front nine and three on the back. Her last two birdies helped seal the win.

The first was on 14, which got her a two-stroke lead on Ye. She got lots more breathing room a hole later, when Ye hit her third shot out of bounds and finished with a quadruple bogey that took her out of contention.

A birdie on 18 solidified Brake’s first Porter Cup win. She hit the green on the par-3 from the tee box and was about 12 yards or so from the pin.

“I missed a couple of short birdies today, like on 17, I missed a 5-footer,” Brake said. “So if you miss one like that, you’ll always get one later on in the course.”

She made the tough birdie and gave what’s become a home crowd one more thing to celebrate.

“Having the people out here in this tournament, it’s all about the people so it was fun for me,” she said.

Winning this tournament could have a big effect on Brake’s career, Conti said.

“I really believe this is what she needed to make her understand that yes, she is this good,” he said. ” … The only piece she was missing, she took care of that this week and you see where she ended up.”

Conti believes this was the final push Brake may have needed to get her into the LPGA Tour. Brake believes this will boost her confidence, but she was still hesitant to say she’ll committ to a life as a professional golfer.

“I’ve always wanted to turn professional since I was a little kid,” Brake said. “It’s just hard, it’s so expensive and there are so many good players. You have to make it your full-time job nowadays, and … right now I’m just not in the right position to do that for myself.

“So maybe in a few years time, (but) I’m always going to have a love for golf. As you can tell, I haven’t played a tournament in a year and then won one.”

NOTES: Szeryk announced that she plans to turn professional. The top-ranked player in the field (16th, according to the World Amateur Golf Ranking) just graduated from Texas A&M. … Lewiston local Maren Cipolla finished 19th at 1-under par with a 226 for the tournament. … Another Lewiston native, Victoria Parker finished tied for 53rd at 4-over par.