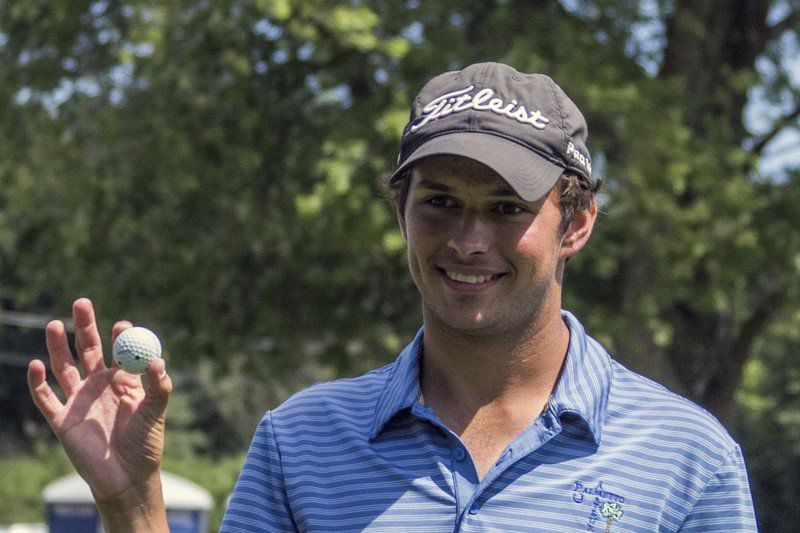 LEWISTON — After teeing off the par-3 fourth hole with his 6-iron during the opening round of the 60th Porter Cup on Wednesday at Niagara Falls Country Club, Ben Reichert couldn’t find exactly where his ball landed.

When he approached the pin and saw where his ball hit, about six or seven feet short, he figured it was in that vicinity. What didn’t come to mind right away was that it went in. It wasn’t until he couldn’t find his ball that he realized what might be happening.

Reichert aced the 196-yard fourth, getting his first career hole-in-one on a course that has given him the least amount of luck.

“The Porter Cup has always been special to me,” Reichert said. “It’s a unique environment, so to get my first one out here, it’s special.”

He didn’t dwell too much on the moment, though. He said once he got to five, he put it in hindsight to finish out the round. And it worked, as Reichert finished the first round tied for first with a 5-under 65.

Reichert, an East Amherst native in his fourth Porter Cup, is very familiar with the course. He also hasn’t had particularly strong showings. Generally, he finishes middle of the pack, last year coming in tied for 42nd. But this year, he’s out to a hot start, tied atop the leaderboard with North Carolina’s Ben Schlottman.

“I just played pretty steadily all day, nothing really jumped out other than the hole-in-one,” Reichert said. “I’m in a pretty good spot heading into the rest of the week. … I didn’t really change much. This course fits my eye, it alway has, even though I haven’t played it great historically.”

It was a a long birdie putt on 18 that gave him the temporary lead before Schlottman finished with a birdie as well to tie.

Schlottman, a recent graduate of Auburn, is playing in his second Porter Cup and pleased to be the co-leader after day one.

“My game just felt really solid the past few weeks so I came in with a lot of confidence,” said Schlottman, who won this year’s North & South Amateur Championship. “I made some putts in the front nine and got everything rolling and kept it going in the back (nine).”

His mindset was not necessarily focused on being a leader after Wednesday but instead playing mistake free. He accomplished both, hitting five birdies and no bogeys in round one.

Another local looking to make an impact in the Porter Cup is former Grand Island graduate Kevin Borowicz. Borowicz, who is playing in his first Porter Cup, is 1-over 71 going into Thursday’s second round.

Though it’s his first time playing in the cup, it’s not his first exposure to it.

“I’ve tried to qualify every year and circumstances were a little different this year and I was happy enough to get an invite,” he said. “The first year I caddied (in 2011), the guy almost won.”

And that experience has given him the confidence and motivation to want to make a run of his own. Since graduating from GI in 2014, he’s played primarily amateur tournaments. He attends the University of Central Florida but is not on the golf team.

Being one of the local guys playing in the tournament, he hopes his Porter Cup debut will be memorable.

“It’s a lot of fun,” Borowicz said. “This week has usually just been me hitting balls at River Oaks (Golf Course). But to be able to come out here and play is a lot of fun. I’m really happy about that.”