Harrison Endycott showed he had more than just the steady hands of a surgeon Saturday.

He also had the guts of a burglar in stealing the 58th Porter Cup away from Gavin Hall.

A 20-year-old Australian bursting with moxie, Endycott shot a 3-under 67 in the final round to finish at 14-under 266 for 72 holes, besting Hall by a single shot.

“I just went and did my thing today,” the ever-confident native of Sydney said. “I thought, I’ve been in these situations before, I know what I’ve got to do. If I can just stay present, play my shots one shot at a time and make some birdies, we’ll see what it does at the end of the day.” 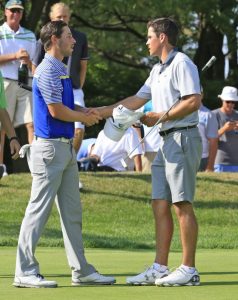 That plan made his the third-ever Australian champion, and second in three years following Geoff Drakeford’s 2014 victory.

“It means a lot for a lot of Aussie golfers. The Porter Cup is such a known event through Australia and really all world amateurs,” Endycott said. “I feel privileged to win it.”

Even if he’ll have to explain to his friends back home where it is.

A four-shot deficit to start the day still faced Endycott on the 12th tee. A sizable gallery was also clearly pulling for Hall, from nearby Pittsford. None of that fazed Endycott.

“I’ve won before,” he said. “I knew how to win in this situation, but at the same time I did have to play good at the right time. I managed to do that, and it was nice to get it done.

Endycott played the final seven holes in 3-under, while Hall went 2-over.

“My driver really wasn’t feeling good,” Endycott said. “But other than that, my ball-striking felt awesome out there. All week it felt good. I knew if I could stay present … I was going to execute with some birdies.”

The biggest of those came on the par-3 16th hole. Facing a 40-foot, right-to-left breaker up the hill, Endycott watched … and watched … as the putt fell. When Hall missed a 7-footer up the Hill for a three-putt bogey, the pair flip-flopped on the leader board.

“That thing just snapped its head off toward the end,” Endycott said of his putt. “As it was snapping it’s head off, I was like, ‘Ok, this could be good.’ ”

It was Endycott’s second 40-foot birdie putt in three holes, following a similar bomb on the par-4 14th.

“Sometimes you need a little bit of luck when you’re holing a 40-footer,” he said. “Yeah, you’ve got to hit a good putt, but you can stand there and hit a good putt to an inch all day. You need that little luck.”

Endycott got up and down from the front of the green on the par-4 17th, while Hall missed a 15-foot birdie attempt that could have squared things. That saved all the drama for the last. 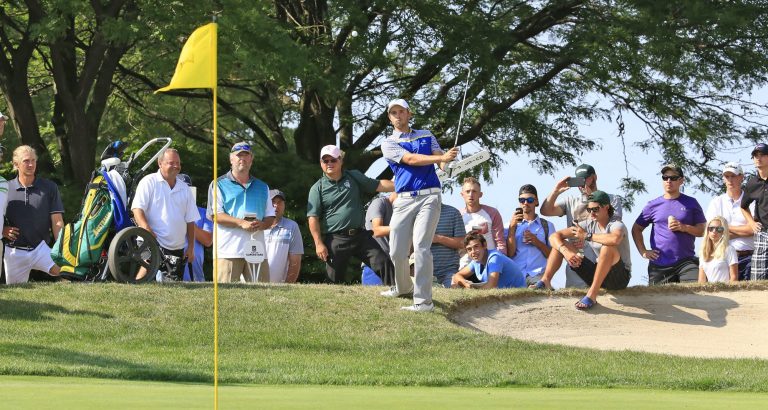 Harrison Endycott hits the flop shot that set up his victory at the Porter Cup. (Harry Scull Jr./Buffalo News)

Endycott was first, and sent his 5-iron over the green.

“I thought it was all over it,” Endycott said. “That wind, as it got halfway through those trees, just completely died, and it just sailed over the pin. I’m like,

What remained was a supreme short-game test. In the rough long of the green, Endycott had about 12 feet of green to work with, but was going straight down hill.

“It was one of those pitches, I had to kill it in the fringe, trickle it down there, and expect to hole a 5-footer,” he said. “I managed to do that, which was good.”

Actually, it was great. 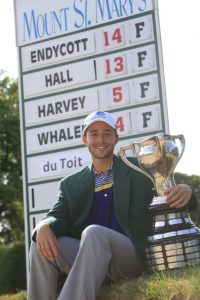 With hundreds of fans swarming the green, and Hall in tight for a 7-foot birdie try, Endycott had about a 2-foot landing area to hit. Bull’s-eye.

“All this stuff to me is just preparation,” Endycott said. “It’s all learning what it’s like to hit shots under the gun, hit shots when you have to. That’s why I’m very proud of myself this week, because I managed to do it.”

Endycott, who came into the week 21st in the World Amateur Golf Ranking, has five wins this season, but it was a second-place finish two weeks ago at the Players Amateur that stuck with him.

“I was really hungry for a win after the Players,” he said. “I played so well, but you get so little out of second place, so it was a bit frustrating.”

Hall is left to deal with that harsh reality.

The 21-year-old played flawless golf through 54 holes, leading after each of the first three rounds. But putts that had been falling simply stopped finding the hole Saturday.

“Gavin’s a phenomenal player,” Endycott said. “His putting stats didn’t indicate how well he really putted today. He’s going to be a great player. He’s so consistent. You’re going to see a lot of him.”

Endycott missed a 5-footer for birdie on the par-4 15th that could have tied him for the lead, setting the stage for the drama that seems to always come on the closing three holes at Niagara Falls.

Facing a 60-footer across and up the severely sloped 16th green, Hall never got the ball high enough. He left himself a 7-footer for par that just grazed the right edge.

“I hit a pretty good second putt,” he said. “My putter has been letting me down.”

That was true on the 18th. After sticking his tee shot to 7 feet left of the pin, his putt never came down.

“I kind of pushed it outside my line,” he said. “At that point, I was trying to will the ball in. I don’t know why nothing was going in. It was just one of those days. I hit a really good shot into that 18th hole just to give myself a chance.”

Hall could only watch as Endycott completed an all-world up-and-down.

“It was pretty unbelievable,” Hall said. “He played great. … He made a lot of putts today. That’s golf. This is a pretty disappointing game.”

Hall has now finished in the top 10 in every one of his five Porter Cup appearances, but is still chasing that elusive victory.

“I think my time is coming,” he said. “Certainly, it hurts now. … I really haven’t had many tournaments go my way. It’s bound to turn around at some point. I don’t know when it’s going to be. It’s surely going to feel pretty good. As long as I keep working hard and doing the right things, I’ll be in good position.”

Saturday, however, belonged to Endycott. After he holed his 5-footer for the win, some friends gave him a champagne shower on the 18th green.  He soaked up every last drop.

“It’s definitely a bit of a feather in the cap,” he said.