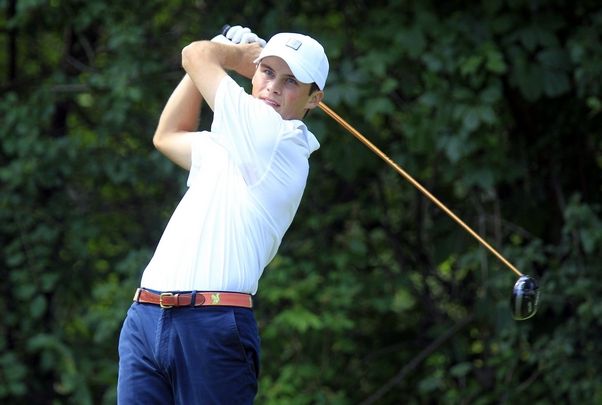 During the second day of Porter Cup action, the top of the leader board was something of a revolving door.

Some appeared to be well set up after a solid morning round, only to be buried by a litany of better afternoon scores.

Some dominated on the front nine only to fall apart in the second half and get lost among a crowded contending pack. 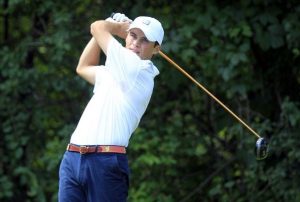 When all the smoke had cleared, Geoff Drakeford (7-under) and Gavin Hall (6-under) sat alone in first and second place, respectively.

Drakeford was tied for fourth place with a three-under 67 in the first round but tied for Thursday’s best score with a four-under 66.

The Australian had an inauspicious start to the second round, but overcame it with a strong stretch in the middle. He bogeyed the first and sixth holes and birdied the third hole to put himself at 1-over through seven holes.

“Everything seemed to be working,” Drakeford said. “If you can get your driver going and you can hit your wedges right, you can get it nice and close for putting.

“I don’t think I made any long putts today. I just hit my wedges well and put it on the green.”

While Drakeford built on a solid first round, Hall wasn’t nearly as good as he was Wednesday. He shot an even 70 to keep his overall score at six-under par. Luckily for him, many of his competitors fell short of their first-round pace, keeping him near the top of the leader board.

Hall had some quality holes – he had four birdies – but he also bogeyed four times, struggling especially on the very par-3 holes he dominated on Wednesday. Three of his four bogeys came on par-3 holes – No. 4, 12 and 16.

“Today was definitely a little more up-and-down,” Hall said. “I didn’t hit the par threes as well. That was the key, I just missed a lot of greens.”

Hall drove well and putted well enough to his liking, but he struggled with his iron play. On more than one occasion, he ended up in the sand and struggled to get the ball to favorable positions on the green.

“To choose one thing” that wasn’t clicking, “I’d say my iron play,” Hall said. “I have to tighten that up a little bit. The rough’s too thick. The sand’s tough to hit out of.”

It was an inconsistent round for Hall, a Pittsford native who now plays for the University of Texas, but he knows he’s in a good position going into the final two rounds of the tournament.

“I couldn’t get any momentum,” Hall said. “Every time I’d hit a birdie, I’d hit a bogey. Other than that, I’m pretty pleased about how I’m playing right now. I feel like I’m in control of where I want the ball to go. I’m really putting it well, I’m excited for the weekend.”

Behind Hall and Drakeford, there’s quite a log jam. Dale Brandt-Richards, Stephane Dubois and Denny McCarthy are locked in a third-place tie at 5-under. David Boote, Max Buckley, Matt Crenshaw, Taylor Funk, Doug Ghim and Bobby Holden are tied at 4-under.