Blackwell learning from his mistakes 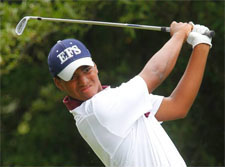 “Everybody needs a good butt whipping once in a while,” he said. “It’s not a bad thing.”

Unfortunately, Blackwell has been on the receiving end this week at Niagara Falls Country Club.

While he’s struggled through the first three rounds, Blackwell has learned plenty of lessons teeing it up against the country’s best amateur players.

James Blackwell hits his tee shot on the 18th hole during the second round of the Porter Cup. (Mark Mulville/Buffalo News)

“It’s good to see where I measure up against these guys,” the St. Joe’s graduate and North Tonawanda resident said. “I’ve known that putting’s been a weakness, and this week I’ve been putting worse than usual.

“But from a ball-striking perspective, I’m right there. I played with Tyler Dunlap (who shot a first-round 65), and if he would have used my approach shots and tee shots, he probably still would have shot 65, because he makes putts.”

Blackwell will tee off in the first group at 8:30 a.m. in today’s final round after he shot an 82 Friday. It’s not what he expected coming in.

“My past few tournaments leading up to here were under par. I definitely expected to at least be in the mix,” he said.

Despite that, Blackwell had his usual throng of supporters following him Friday.

“Not only is he an exceptional golfer, he’s a great kid,” said David Reid, a family friend who’s caddying for Blackwell this week. “We all are extremely proud of him. I told him, ‘look at it as something you can look forward to.’ This is the first big tournament you’re playing in, but there’s going to be many, many more. Enjoy it. Get the feeling of playing in a tournament like this.’ ”

Reid met Blackwell when he was 6 years old, playing as part of the Buffalo Inner City Youth Golf Program.

“His golf bag was bigger than he was back then,” Reid said. “He was out there dragging his bag around. He was always determined. He just wanted to play, and get better.”

When he was 8, Blackwell got a chance to travel to Florida to meet Tiger Woods. Hank Williams Jr., the founder of Buffalo’s Inner City golf program, had previously served in the military with Woods’ father, Earl.

“I was a little shy because I was 8 years old and he’s Tiger Woods,” Blackwell said.

Blackwell will leave next month for Ball State University, where he’ll join the golf team. After his runner-up performance at the International Junior Masters last month, he got some feelers from the University of Alabama.

“They talked to my dad and a family friend who always follows me around,” Blackwell said. “Their assistant coach was at the Junior Masters and saw me hit the ball, saw my potential, I guess.”

Blackwell, though, will honor the verbal commitment he made to Ball State.

While there have been valleys in his golf career – including when he wasn’t sure whether he’d ever be able to play the game again after a serious car accident as a high school sophomore – Blackwell has stuck with it in part because he recognizes that as a minority playing golf, he can serve as a role model to younger kids.

“One of the guys I know from Delaware Park told me a few few kids – whenever my name is in the paper — they cut it out and post it on their wall. That was pretty special to hear. It kind of made me realize that maybe I can help them and show them they can play this game.”

Blackwell will tee off with Hamburg’s Brian Jurkiewicz today. The St. Bonaventure sophomore shot an 80 in the third round Friday.

Buffalo’s Chris Covelli shot a third-round 72 Friday to record the best score among the local players in the field.

Clarence’s Matt Stasiak had a triple-bogey 8 on the par-5 13th hole after he drove the ball out of bounds left, finishing at 3-over 73. He’s tied for 50th, the leading area player on the leader board.

Lewiston’s Mike Boss struggled to a 79 after shooting a second-round 66.

The round of the day, a 7-under 63, was turned in by 18-year-old Australian Cameron Smith, one of the more promising young players in the field.

Smith won the Australian Junior championship last year, and is playing in his second Porter Cup. He carded eight birdies and a bogey.

Niagara Falls Country Club has played progressively hard as the tournament has gone on. After coming in under par with a stroke average of 69.83 in the first round, it averaged 70.50 in the second round. Friday’s third round was the toughest so far, a full shot over par at 71.18.

The new second hole has also achieved its desired effect. What was once one of the easier holes on the course is now a fair challenge. The par-4 hole has played to stroke averages of 4.14, 4.09 and 4.00 in the first three rounds, ranking as the sixth, seventh and 11th toughest holes on each day.