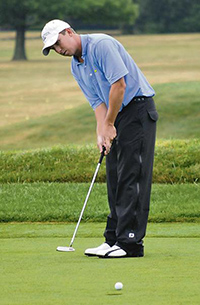 Paul Haley, of Houston, Texas, putts on the first hole at the Niagara Falls Country Club during first round action at the 53rd Annual Porter Cup. Rodgers is second place shooting an eight under for the first day of tournament play. (Dan Cappellazzo/Niagara Gazette)

Haley retained his lead at the 53rd Porter Cup, shooting a 4-under par 66 on Thursday at an overcast Niagara Falls Country Club.

He’s at 10-under for the tournament, one shot ahead of Patrick Rodgers and three better than Nate McCoy. Despite another day devoid of bogeys, Haley wasn’t satisfied by a long stretch of pars.

“I just didn’t really capitalize on the front nine,” he said. “I birdied my first two and didn’t make another birdie until 15.”

“I’m probably going to make a bogey at some point in the tournament — I went out today thinking I would,” he said. “I played pretty smart and was making a few par putts, and that par save on 18 was pretty good.”

His tee shot on No. 18 landed in the rough just past the far bunker, bouncing off another player’s caddy as the group ahead signed their scorecards. A solid up-and-down put his ball three feet from the pin. He tapped in to save his par as a small crowd applauded the effort.

“It’’s nice to get that up-and-down, but I wouldn’t want to do it again,” he said. “Thats a 1-in-10 up-and-down, but I had to go with the hole and it was just perfect. After I hit my tee shot I was thinking ‘just don’t make a five, give yourself a chance at a three. If you walk off with a four it’s not a big deal. It’s the 36th hole of a 72-hole tournament.’”

The par save gives Haley some added momentum as the tournament hits the turn and the crowd surrounding the leaders grows as they tee off at 12:40 p.m. today. While his opponents wait for Hale’’s first bogey of the week, he thinks there’s room for improvement in his game.

“I missed probably four or five putts inside 12 feet today for birdie, but that happens,” he said. “I probably made some I shouldn’t haven’t made either. I’ve been hitting well and giving myself a lot of chances.”

Haley’s Porter Cup has had few obstacles, but the 23-year-old says he’ll be ready when they come.

“Just keep doing what I’m doing and hopefully when that bogey comes over the next few days, I rebound from it,” he said.

Early morning rain disrupted at least a few holes for most of the early tee times, with wind and showers soaking greens to the delight of the later pairings. The rain started on the ninth green for Andrew Rodgers, and despite some tough play for three holes, a 7-under par round of 63 puts him in second place after 36 holes.

“Going into the day I was just trying to battle the conditions,” Rodgers said. “I knew it would be rainy out there and we were kind of fortunate it was only three holes of rain. I played well through that.”

Rodgers, who is playing in his first Porter Cup, birdied No. 11 through the rain and added six more to his bogey-free card on Thursday. His 63 was one shot better than fourth-place Tarquin MacManus’ 64.

Rodgers briefly held the lead, but walking off the links the Avon, Ind. native knew his score wouldn’t top the leaderboard when the sun set Thursday.

Three of the top four from Wednesday barely saw rain on the course, but Rodgers said dodging droplets helped his concentration.

“While it was raining (the course) played pretty tough, the wind started kicking up and you’re just trying to stay dry,” he said. “I really think that helps me focus just on myself and on making a shot and not get too ahead of myself. It was kind of a springboard for me finishing the round.”

Cody Gribble dropped to 20th place after following his opening-round 4-under par 66 with a 2-over par 72 on Thursday. He’s tied with Daniel Nisbet, who shot a 73 Thursday after an opening round 65 had him tied for Garrett Rank for second. Rank’s 71 on Thursday put him in a tie for seventh.

Tim Hart and Cheng Tsung Pan are tied for fifth at 5-under par, while Rank is joined by Dylan Frittelli, Mark Hoffman, John Peterson and Andrew Yun at 4-under. Last year’s Porter Cup winner, David Chung, shot his second 72 of the tournament on Thursday and sits tied for 65th along with Lewiston resident Mike Boss, who shot a 4-over par 74 in round two.