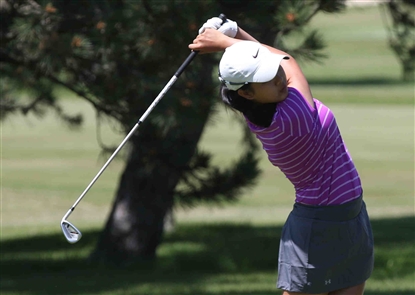 Lois Kaye Go of the Philippines birdied five of the last eight holes and shot a final-round 65 Friday to win the Women’s Porter Cup golf tournament.

Go, who just finished her freshman year at Boston College, finished at 8-under 208 at Niagara Falls Country Club to win by five strokes over Penn State’s Laruen Waller.

“I was very surprised with the way I played today,” Go said. “I really wasn’t expecting it. It was actually my best round of my life.”

The 18-year-old Go looks like she will be a force in collegiate golf the next three years. The ninth-ranked junior in the 2016 recruiting class, she was the No. 1 player for Boston College with a 71.0 scoring average and was one of only two freshmen to make all-Atlantic Coast Conference.

“The key was I was making my putts,” Go said. “I was sticking it close enough and my putts were just dropping.”

Leaders: Waller was the No. 1 player as a sophomore for Penn State this year. Finishing third at 1-under was Naomi Ko of Canada and North Carolina State. Michigan State’s Katie Sharp was fourth at 1-over. Mika Liu, the Stanford-bound junior star from Beverly Hills, Calif., finished in a four-way tie for fifth at 2-over. The course played 5,925 yards for the final round.

Top WNYer: Lancaster’s Chelsea Dantonio tied for 17th at 4-over after a final-round, even-par 72. She was the top Western New York finisher. Dantonio, who tied for 35th last year, just finished her sophomore season at Winthrop University in South Carolina.

“That’s my goal, to score lower and place lower each year,” Dantonio said.

Dantonio tied for seventh at the Big South Conference championship with a 1-over 217 score, the lowest in Winthrop history at the event. She had five top-10 finishes. She has been tutored by former PGA Tour pro Allen Miller her whole career and said a few tweaks the past few weeks have put her in a better position at the top of her swing.

“Fall season I didn’t do so great but working with my coach over the winter was a big turning point in my game,” Dantonio said of Miller. “I performed really well in the spring and I came back and worked even harder with him since.”

Dantonio’s dad, Chris, was her caddy, and she was playing with new, PXG irons for the first time in a tournament.

Top 30: Lewiston’s Victoria Parker was the No. 2 WNY finisher. She tied for 26th after a final-round 73. Parker, a Sacred Heart product who plays out of Orchard Park CC, just finished her freshman year at Coastal Carolina, where she had a 77.5 stroke average. She’s tutored by Gary Battistoni and says her game got better this year.

“I loved it,” she said of the Myrtle Beach, S.C., school. “We had to do a lot of workouts and a lot of practice that I wasn’t used to. My game has gotten a lot better. My up and downs. I know I can scramble better, which I did on the front a lot today to save par.”