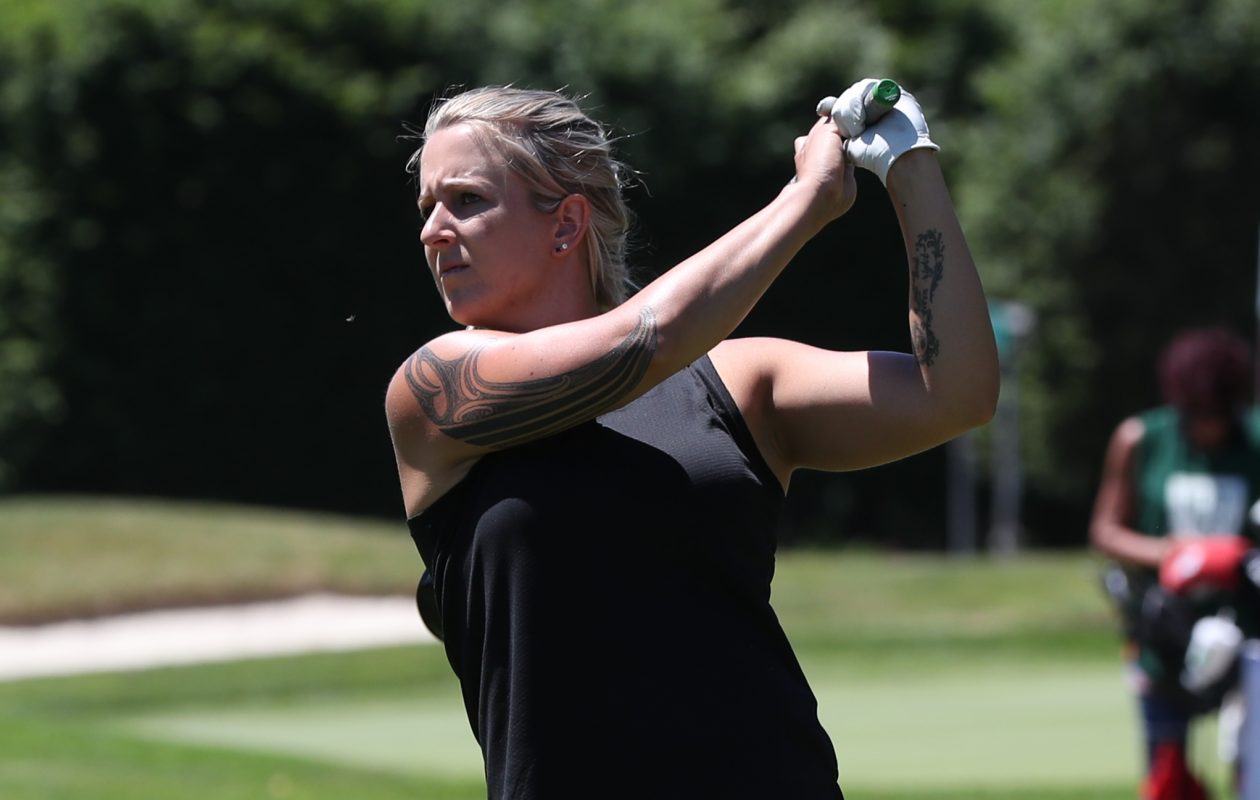 LEWISTON – Zoe-Beth Brake likes to think she’s just an average person. She works a 9-to- 5 job, golfs only when she wants to and enjoys the life she’s built for herself in the United States.

But on Friday, Brake did something spectacular. The New Zealand native won the Women’s Porter Cup and in the process defeated some of the best amateur golfers in the world at Niagara Falls Country Club.

Brake posted a winning score of 8-under 208 to finish three strokes ahead of runner-up Maddie Szeryk.

Brake wrote the words “shine bright” elegantly on her hand before the start of the competition to remind her of what she was capable of. She entered the final day of the three-day tournament tied with Lei Ye, the 18-year-old phenom from Shanghai, China, and the two remained tied until the 13th hole. There, Brake had her first birdie since the third hole to open up a one-shot lead.

She didn’t waver for the rest of the competition, capping her day with a birdie on the 18th hole to extend her lead to three shots.

While her competitors stayed laser-focused throughout the tournament, Brake took a step back and had a more relaxed approach to her game.

Brake knows she has come a long way from where she was six years ago when she competed in the first-ever women’s cup. After high school Brake wasn’t sure what she wanted to do with her life, so she joined the New Zealand Navy and spent two and a half years there before deciding to golf for Ohio State.

She graduated last year and has since gotten what she says is just a “regular” job, meaning her golf game has taken a backseat to real-world responsibilities. The first day of the tournament was her first competitive round since last year’s Porter Cup, and for her, this was a rare opportunity to embrace the game for what it is.

“Golf for me is just about having fun and when I’m having fun I’m playing well,” she said. “Not being so hard on myself and letting the not-so-great shots go. Just really my motto has been to go out, have fun and not care about the outcome.”

She high-fived crossing guards, joked around with photographers and took time to speak with the young girls who fawned over her throughout the tournament.

“I started golf when I was 6 years old so I would always be out watching the big guns and I would have stars in my eyes,” Brake said. “Seeing younger girls out there I think is a good way to get them to strive for something in life.”

Although she would love to turn professional, she is realistic that that isn’t the most practical route. For now, she plans to just keep having fun and doing what she wants to do.

“Sponsorship is a big thing,” Brake said. “It’s tough. I don’t expect my parents to pay for it. I’m just working right now and trying to build a foundation and I feel like that’s something I could always come back to in the future.”

Runner-up Szeryk made her last Porter Cup appearance a memorable one. Szeryk, a member of the Canadian amateur team and recent graduate of Texas A&M, rallied to finish three strokes behind Brake after finishing the opening round seven shots off the lead.

Szeryk plans to turn professional at the end of the summer.

“It was very good especially considering how the first round went,” she said. “The last two days I was just trying to focus on hitting fairways and hitting greens because that’s what my big problem was on the first day. I just went out and did my game and didn’t worry about what other people were doing.”

Cipolla top WNY finisher
Maren Cipolla, a rising junior at the University of Texas and a Lewiston native, was the top finisher from Western New York. She finished 19th with 10-over 226.

Chelsea Dantonio, a rising senior at Winthrop University and also a Lewiston native, finished tied for 25th after faltering on the last day. Dantonio entered the day in 13th place. In total there were seven golfers from Western New York competing.