Canadians in position to end drought at Porter Cup 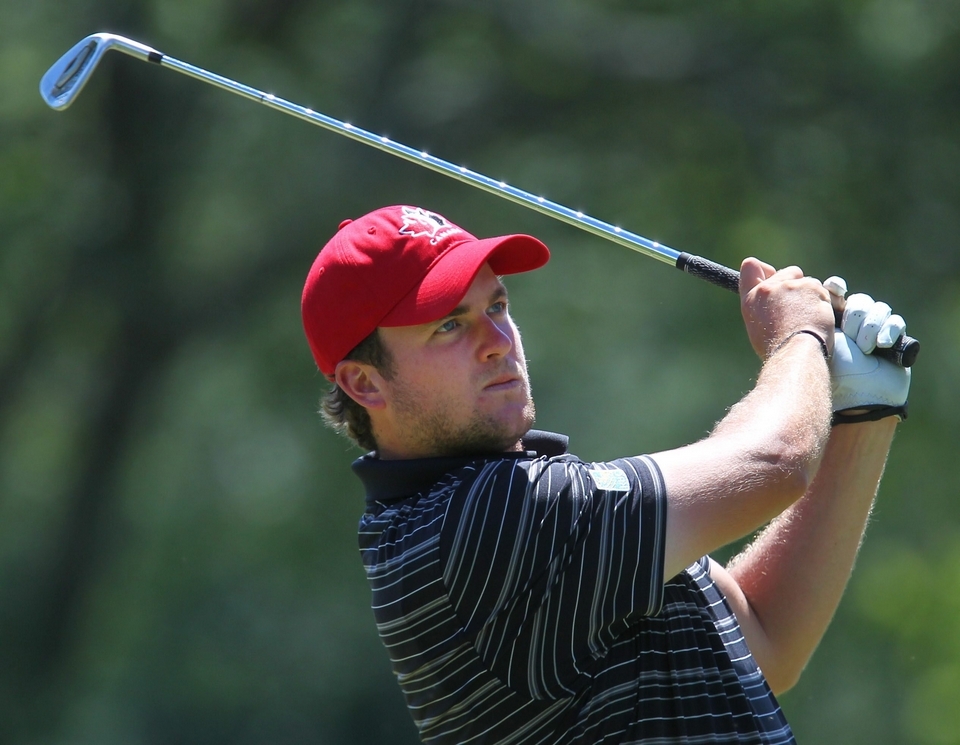 LEWISTON — It’s been 28 years since a Canadian player has sipped champagne from the Porter Cup. 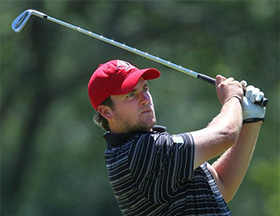 Taylor Pendrith takes a one-shot lead into today’s final round of the Porter Cup as he stands at 13-under-par after firing a 63 on Friday.
(Mark Mullville/Buffalo News)

That streak will be in serious jeopardy today at Niagara Falls Country Club.

A sparkling round of 7-under 63 Friday in the third round gave 22-year-old Taylor Pendrith of Richmond Hill, Ont., a three-round total of 13-under-par and sole possession of the lead on a postcard-perfect day along the Niagara escarpment.

He’ll be in the final group teeing off at noon today, joined by his teammate with the Canadian national team, Justin Shin, who at 12-under is just one shot back, and Texan Tyler Dunlap, the second-round leader who is at 10-under 200 after an even-par round of 70 Friday.

“I played pretty solid all day,” said Pendrith, a senior at Kent State whose 63 was just one shot off his career low round. “I was just trying to make as many birdies as possible and take one shot at a time. I knew birdies were out there.”

Pendrith started cashing in his chances early, making birdie on the par-5 third hole and then the difficult par-4 fifth, when he hit his approach shot from 140 yards out to within 10 feet and converted the putt. He followed that up by tucking an 8-iron on the par-3 seventh hole to within 3 feet for a kick-in birdie, playing the front nine in 3-under. That was a big turnaround from the first two rounds, when he played the front nine in 2-over.

“I got off to a lot better start today,” he said.

He also got some good breaks, like on the par-5 11th when he was going for the green in two and blasted it way right of the hole. He was able to recover by putting his third shot on the green and two-putting for par. He also sank a 25-foot putt on the difficult par-3 16th hole to keep his bogey-free round intact.

“They were very tough finishing holes. If you can play them even or 1-over, you’re probably picking up some shots on the field,” he said.

Pendrith and Shin haven’t played many competitive rounds together, but they’re both members at the same club, Summit Golf and Country Club, and expect that measure of familiarity to help calm their nerves in the final round.

“I feel comfortable doing that,” Pendrith said of playing with the 21-year-old Shin. “I’ve got to know him pretty well, and he’s a great player, so it will be fun.”

Shin kept with his theme from the first two rounds: a ho-hum front, followed by an assault on the back nine. He made the turn at even in his third round, then birdied the par-4 10th for a third straight day.

“Maybe put Justin Shin on the flag,” he joked when asked whether they might consider naming the hole after him.

From there, he made back-to-back birdies on the par-5 11th and par-3 12th holes, then nearly holed his second shot on the par-4 15th hole.

His tap-in birdie got him to 13-under, but he dropped a shot after a wayward drive on the par-4 17th. Despite that bogey, he’s still played the back nine in 13-under par for the week.

“I’m excited to go out tomorrow and play with my buddy,” he said.

Not since Danny Mijovic in 1984 has a Canadian player won the Porter Cup, and the only other one to do it was Gary Cowan in 1969. Shin and Pendrith almost didn’t get a chance this year.

Both played in the qualifier for the RBC Canadian Open on Monday, with Shin missing out on a playoff by just a shot, but they’ve positioned themselves for one heck of a consolation prize.

“It’s pretty nice to see that all the guys have been playing good,” Pendrith said of the Canadian national team.

“Golf in Canada is improving, and there are some players who can really play.”

Hossler, who played in the final group Friday, shot his first over-par round of the tournament, a 71 that featured bogeys on the par-4 fifth and par-5 13th hole against a lone birdie on the par-3 sixth hole.

Wilson, meanwhile, birdied all three of the par-5 holes on his way to a 66 that moved him up from a tie for 14th at the start of the round into a tie for fifth heading into the final day.