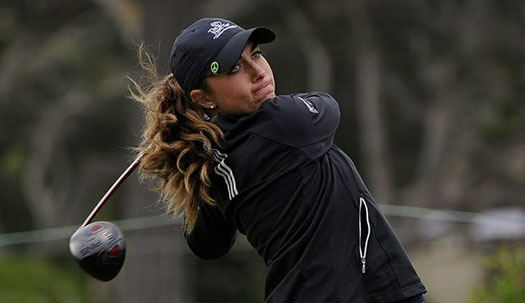 Dressed in orange and black on Wednesday, Casie Cathrea made no secret about where she is heading in the fall.

The incoming Oklahoma State freshman shot a bogey-free 6-under 65 at Niagara Falls Country Club to take a three-shot lead after the first round of the inaugural Women’s Porter Cup.

A native of Livermore, Calif., Cathrea had no expectations heading into the week but is more than pleased with her first-round score. She started her round with a birdie on No. 1, kick-starting her round.

The width of the fairways, how much is in front of you and the width of the greens at Niagara Falls Country Club are similar to the courses that Cathrea plays back home in California, Haggin Oaks and San Francisco Golf Club. That puts her at ease on this golf course.

This tournament was not on Cathrea’s radar at the beginning of the summer. But Oklahoma State head coach Alan Bratton told her to consider the first-year event, which complements the long-running men’s Porter Cup here next month. Cathrea entered soon after.

The 17-year-old is looking forward to graduating from high school next week and playing in her first U.S. Women’s Open the following week, at Sebonack Golf Club.

“I just want to be out there,” Cathrea said of being in Southampton, N.Y. She is ranked No. 6 in the Golfweek/Sagarin Junior Rankings.

She’ll do the same tomorrow, “come out and act like I’m going to shoot even par,” as recent Texas State graduate Krista Puisite is trying to catch her. Puisite sits in second after firing a 3-under 68. Oklahoma senior Emily Collins and Iowa State senior Prima Thammaraks are tied for third at 2 under. Only five players broke par during Wednesday’s first round.

Thammaraks thought 5 under would be the winning score come Friday, but with Cathrea coming in at 6 under on the first day, scores might be a lot lower in days to come.