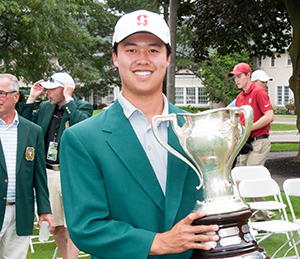 “The players receiving exemptions for this year’s LECOM Health Challenge represent the incredible talent, experience, and diversity that make this tournament so competitive and fun to watch,” said Mark Geise, CEO of the Chautauqua Region Economic Development Corporation (CREDC). “We look forward to seeing Brandon, Drew, Mike, and Chris at Peek’n Peak in July.”

The LECOM Health Challenge can select up to four players to receive exemptions, giving them automatic entry into the tournament. Two exemptions are classified as restricted and must be allocated to individuals who currently hold Web.com Tour status, while the remaining two exemptions are unrestricted and can be given to anyone.

Brandon Wu, a rising senior at Stanford University, received an unrestricted exemption for the 2018 LECOM Health Challenge after shooting a final round of 64 to win the 2017 Porter Cup at Niagara Falls Country Club. In 2016, he tied for 16th at the NCGA Amateur Match Play Championship.

Drew Deimel, an Erie, Pennsylvania native, will play the tournament with an unrestricted exemption. Deimel turned professional in 2012 after playing for Gannon University, where he was a two-time Erie District Golf Association Champion and earned the title of 2010-11 Pennsylvania State Athletic Conference Athlete of the Year.

Mike Van Sickle is receiving one of the tournament’s restricted exemptions. A graduate of Marquette University, he was the first amateur player since 1955 to win the Pennsylvania Open Championship back-to-back. Van Sickle played the Web.com Tour Qualifying Tournament in 2014.

Chris Wilson, a Dublin, Ohio native and alumnus of Northwestern University, will play the LECOM Health Challenge as a restricted exemption. Wilson played his first Web.com Tour in 2012. Last year, he had two T17 finishes at the Rex Hospital Open and Rust-Oleum Championship.

Exempt players will join a field of competitors from the Web.com Tour and the top 12 finishers of the July 2 local qualifying round at Shorewood Country Club in Dunkirk.