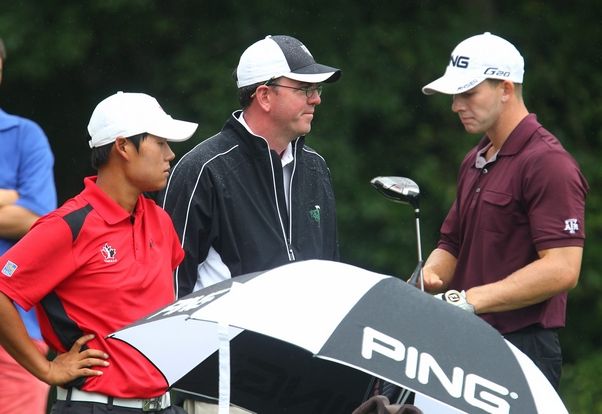 by Jerry Sullivan, The Buffalo News

LEWISTON — When Michael Vitch was a kid, he lived for the Porter Cup. Vitch would ride his bicycle to the Niagara Falls Country Club and park it near the par-3 16th hole. Then he’d walk up the hill to the 15th green, which sits adjacent to the 16th and 17th tees.

“I used to sit right there,” Vitch said Saturday afternoon, pointing to a place behind the 15th green. “This is my spot. It’s still my spot.”

The final group was coming up 15, with Canada’s Taylor Pendrith holding an insurmountable six-shot lead. You could watch the groups playing the 16th and 17th from that spot, which provides one of the most majestic golf views imaginable. From the 16th green, you can peek through the trees and see Ontario. Vitch dreamed of playing at Niagara Falls as a boy. Twenty-seven years ago, he finally became a member. His sponsor was Tom Denn, who served the Porter Cup for more than 40 years in a variety of roles, most notably as the booming voice who announced the players as the starter on the first tee.

Denn was the heartbeat of the Porter Cup for half a century. He was general chairman at one time. He hosted players at his house for years. He urged people to “taste the Porter Cup experience” by getting involved. He encouraged the children of members to volunteer. He made it a point to learn their names. 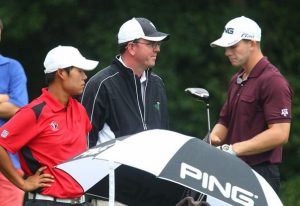 Essentially, the Porter Cup was a family event for Denn. You passed the Porter Cup tradition along, like a family keepsake. It’s a spirit that has kept the event going and helped it become one of the top amateur golf events in the world, and a local sporting treasure.

“Tom truly loved this tournament,” said Vitch, who was assistant tournament director this year. “And he instilled that in his son.”

Steve Denn has been tournament director for 13 years. Denn does the formidable job of putting together the Porter Cup field. Vitch called him one of the finest tournament directors in amateur golf. This year, though, the experience tasted bittersweet for the younger Denn.

In January, Tom Denn – “The Voice of the Porter Cup” – died at age 79. They played the tournament in his memory. Every day, they placed photographs of Tom at the first tee, where he used to announce the names of the players in a commanding, stentorian voice.

Steve Denn wrote a memorial to his dad in the Porter Cup program. He kept putting the assignment off. The publication deadline approached. Steve finally sat down and wrote a nice tribute, calling his father “the backbone of the Porter Cup, the link between its past and present.”

Denn looked up as he was finishing and saw a calendar. It was June 27, which would have been Tom Denn’s 80th birthday.

“Obviously, it was words from the heart,” Steve said late Saturday after the awards ceremony.

There was a sense of relief and joy in the awards tent. They had finished the tournament without delays, despite intermittent rains on Saturday. As Pendrith accepted the winner’s trophy, someone began singing “O Canada!” Before you knew it, everyone was singing, including Pendrith.

It was a touching moment, one Tom Denn would have relished. No Canadian had won in 28 years. Steve Denn claimed Pendrith as a local, saying there hadn’t been a champion from such close geographic proximity since the 1960s. It heightened the feeling of nostalgia among the Porter Cup family.

Armstrong, an assistant director and former chairman, remembers working the Porter Cup as a teenager. She and another girl ran the scorecards from the course to the main scoreboard.

“The first Porter Cup I worked at, Ben Crenshaw won,” Armstrong said. “Do the math. All the guys from back then are on the Senior Tour now. We’d run the scores, put ’em up, run the scorecards back. Ralph Hubbell did a live radio show through the whole tournament, every day. We used to have a blast.”

Armstrong said it was quite emotional when Steve Denn spoke about his father at the players’ dinner last Tuesday. “It brought a tear to the eye of a lot of people who worked with Tom over the years,” she said.

Steve Denn had a surprise. He had created an award in his father’s honor. The first Tom Denn award for loyalty and commitment to the Porter Cup went to Max Homa, a Californian who turned down an invitation to the Canadian Open to play at Niagara Falls.

Homa, the individual medalist at the NCAA Division I men’s championships, said it was no big deal. He made a commitment to the Porter Cup and felt an obligation to honor it. There are more important things than being a good golfer, he said. A good person, for one.

“First of all, I stay with a really great family,” Homa said. “Bob Woods and his family. I’m really close to them. They have two great kids, 9-year-old twins. This is my third year. I wanted to come see them again.”

That sort of sentiment brings a smile to the faces of the Porter Cup folks. Yes, these players are enormously gifted. Some will be successful pros some day. But they’re still kids at heart, and they’re not being paid. They play golf for the love of the game.

The word “amateur” derives from the Latin for “lover.” When Tom Denn told people to taste the experience, and when he boomed out the names of the players on the first tee, he did it for the pure love of golf.

You pass it down through the generations. That’s why Mike Vitch shows up year after year, like the child on the bike, and finds his spot near the 15th green.

“It’s certainly not the same here without him.”