Denn looks ahead to 2015 Porter Cup

With the 56th Porter Cup in the books, it’s natural for attention to turn to No. 57.

That will be Steve Denn’s 15th as tournament director, and it probably won’t be his last.

“It’s a labor of love, obviously,” Denn said. “This year was a little bit more difficult, quite frankly, than in prior years – partly because of the condition of the course back in May. That’s when the light switch always seemed to go off – ‘OK, it’s Porter Cup mode, I need to start really focusing on getting the tournament going.’ 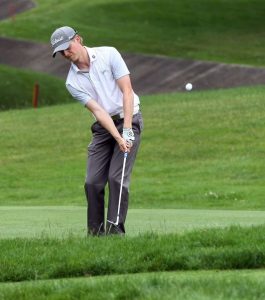 Ben Eccles hits a shot to the green on the 15th hole during the final round of the Porter Cup at the Niagara Falls Country Club. (James P. McCoy/ Buffalo News)

Denn’s job comes with a great deal of pressure. He’s expected to produce a field every year that ranks as one of the best in the country.

“Quite frankly, I don’t think there’s anybody else who wants the job,” he joked. “I know there’s a lot of responsibility with regard to upholding the traditions of the tournament and everything, so it’s a role that I relish.

“Obviously I grew up with the tournament, so I’m going to do everything I can to make sure the prestige is upheld. Everybody, they want to give back in some way to the community or to whatever their cause may be. I’ve been on earth now for 45 years and I’m looking at the things that I love, and outside of my family, the Porter Cup is next. That’s going to be the way I choose to give back at least for the foreseeable future.”

During the second Women’s Porter Cup in June, Denn served as a caddy for eventual winner Brooke Henderson in the first two rounds.

“These are my roots,” he said at the time. “I don’t get to do that kind of stuff during the men’s Porter Cup, so I like to. I’ve got such fond memories when I was a little kid, even as a spotter. Spotters are kind of a boring job and I used to love it. I sat on the fourth hole and I was probably 8 or 9 and I used to go out and fix the player’s ball marks as they hit into the green, just to kind of occupy the time. I was just so into it.”

One of Denn’s biggest challenges this year was the condition of the course back in the spring. The brutal Western New York winter caused severe damage to 16 of Niagara Falls Country Club’s greens.

“I had at least five or six players or parents contact me asking me if the Porter Cup was going to be cancelled,” Denn said. “Personally, I was nervous. We got a late start to a lot of things, but the course has rebounded tremendously.”

During the awards ceremony Saturday after Australian Geoff Drakeford’s one-stroke victory, Denn had those in attendance give a standing ovation to Dave Meteer, the superintendent of grounds and maintenance.

He’s to be commended for a great job,” Denn said. “He’s a workhorse.”

The William J. McMahon Porter Cup Award, which is given annually to the qualifying medalist of the previous year’s U.S. Mid-Amateur championship, went to Matt Mattare.

Named after a co-founder and long-time director of the Porter Cup, the award includes a contribution to the charity of the recipient’s choice.

The second annual Tom Denn Award, which is given out to a recipient who has shown loyalty and commitment to the Porter Cup, went to Bill Harvey posthumously. It was accepted Tuesday night at the player’s dinner by Scott Harvey, Bill’s son.

The low local player in the field was East Amherst’s Danny Yustin, who carded an even-par 70 in the final round to finish in a tie for 18th place, at even-par 280 for the tournament.

As a result, Yustin will receive an invitation to next year’s tournament. The top 25 and ties receive the invitation, with the cutoff this year being 1-over 281.