Round of 66 leads to five-shot victory

Four years into the Women’s Porter Cup, some trends are emerging. 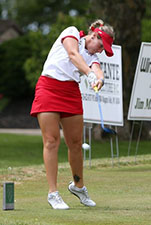 Josee Doyon captured the Women’s Porter Cup at Niagara Falls Country Club with a sparkling 5-under 66 in the final round. (James P. McCoy/Buffalo News)

Josee Doyon checked both of those boxes Friday, firing a sterling 5-under 66 to earn a five-shot victory at Niagara Falls Country Club. After two days of tough scoring conditions, the third and final round was played under spectacularly sunny skies and just light breezes.

Doyon capitalized on the opportunity, ripping off consecutive birdies at the par-4 sixth and par-3 seventh holes. When second-round leader Princess Superal bogeyed the sixth after missing the green long and failing to get up and down, Doyon moved into the lead and never looked back.

“I wasn’t really thinking about it,” Doyon said of her position on the leader board. “Just keep playing how you play. Don’t force anything.”

Doyon took a two-shot lead to the back nine, but Superal shaved one off that with a birdie on the par-3 12th hole. When she stuck her third shot on the par-5 13th hole within 2 feet, Doyon’s lead looked in danger.

But the 23-year-old from St-Georges, Quebec, calmly got up and down from the right bunker for a birdie of her own to maintain her advantage.

“I knew she would make a birdie,” Doyon said, “so I thought, ‘Put that bunker shot as close as I can.’ It was pretty much straight uphill, so I knew I would make it.”

The lead stayed that way until Superal missed a 3-foot par putt on the par-4 15th hole. Doyon then put her foot on the gas, bombing a drive on No. 17 – which plays as a par 5 for women – leading to an easy two-putt birdie.

“It was the first time hitting the fairway on that hole,” she said. “The whole week I didn’t hit a lot of fairways, and then today I hit almost all of them. That really made a difference. It was pretty long, too, so that was good.”

“It was really nice to finish the day by sinking that putt,” she said. “It was going well today. That was my longest putt of the week that I’ve made and it was pretty great to finish on it.

“My putter has always been my strength. I just needed to step up and do it.”

“I didn’t really have much today,” Superal said. “But Josee played amazing.”

“I remember I was phoning Brooke that final round,” Doyon said. “It did cross my mind even today, remembering she shot 62 the last day. That’s someone I would want to follow in her footsteps. She’s a great player.”

Doyon hopes Friday’s victory is a springboard to bigger things. After a disappointing senior season at Kent State, she plans on playing a full amateur schedule this summer before turning pro in the fall.

“It’s the beginning of a new season,” she said, “and I’m getting ready for a good summer.”

Doyon finished with a stroke average of 73.94 during her senior season, with a seventh-place finish at the Mid-American Conference championship. Her victory Friday came in her third Porter Cup appearance, and after a third-place finish in 2015.

Not bad after almost never getting into the field.

Doyon laughed when recollecting how her application for her first Porter Cup in 2014 came in late.

“I remember the first year, I registered late,” she said. Tournament director Brian “Oakley was like, ‘I don’t know if we can get you in.’ I finally got in the tournament. I was in Canada, he called me and was like, ‘You need your passport.’ I was like, ‘Where is this tournament?’ “

It turns out, she knows now.

Clarence’s Cat Peters shot a 2-over 73 Friday to finish tops among the local players in the field with a 54-hole total of 229.