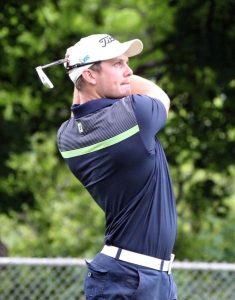 Geoff Drakeford of Australia plays an iron shot on the 16th hole on his way to the Porter Cup championship Saturday at the Niagara Falls Country Club. (James P. McCoy/ Buffalo News)

Geoff Drakeford avoided looking at a leader board all week at the Porter Cup – until approaching the green on his 72nd and final hole Saturday.

He was greeted with good news when he got there. The 22-year-old Australian held a two-shot lead over countryman Ben Eccles, meaning only a respective bogey-birdie finish could keep Drakeford from donning the winner’s green jacket at Niagara Falls Country Club.

With Eccles looking at a long birdie putt from the fringe and Drakeford in the front-right bunker, there was still work to be done. Drakeford blasted out to 4 feet, and had two putts from there to win when Eccles’ birdie putt came up short.

The easy-going Australian needed them both, but ultimately came away with what he called the biggest victory of his career. Drakeford finished at 8-under 272 for the week, a shot clear of University of Virginia senior Denny McCarthy and University of Texas sophomore Beau Hossler.

Drakeford is the first Australian to win since Simon Nash in 2002.

“It feels really good,” said Drakeford, who finished runner-up in the 2013 Australian Amateur. “It’s been a long time since a win has come around, so it’s a great feeling. I haven’t felt like this for a long time.”

Drakeford came into the round thinking he’d need to shoot 1- or 2-under – “anything in the red” – to win. He ultimately finished at 1-over, proving true the old adage that the Porter Cup doesn’t really start until the leaders reach the par-3 16th hole.

“Nerves were fine all the way through,” Drakeford said, until he “got to the last three holes and I was starting to feel it a little bit more.”

Eccles, a 19-year-old from Torquay, Australia, put the pressure on with a birdie on the par-3 15th hole to close within a shot.

“I knew I had to push him basically all day,” Eccles said. “Geoff’s been playing well all summer, and it was only a matter of time before he had a win. It was nice to be in contention and I had a really good week, so I’m happy with myself.”

Eccles’ tee shot on the par-3 16th found the putting surface, while Drakeford drove it into the right bunker. He was able to blast out to 5 feet for a crucial sand save, while Eccles’ birdie putt just missed.

On the par-4 17th, Drakeford went the safe route and hit an iron down the middle. Eccles went with driver, and it landed literally inches from going out of bounds to the right.

“I had just been trying to stick to what I’ve been doing, and I hit a bad shot off the tee,” he said.

He wasn’t able to recover after chipping out, missing his par putt that gave Drakeford the breathing room he would need going to No. 18.

With the out of bounds of Lewiston Road looming to the left, Drakeford hit an 8-iron into the front bunker. Once he was safely out, the tournament was effectively his. Eccles ended up with a bogey for a round of even par 70, leaving him in fourth place.

McCarthy made the day’s big charge. His bogey-free 65 was the low score of the final round.

“I just played a solid round. I put the ball in some good places, made some nice putts, and made some good par saves,” he said. “I missed a couple birdie chances I’d like to have back, but it’s out of my control now. I’m still really pleased with the way I’m playing.”

McCarthy’s round came a day after he shot a 73, his highest score in four Porter Cup appearances.

“I was reminded by a couple people that that was the worst round I ever shot out here,” he said with a laugh Saturday. “It’s pretty easy to forget about that with all the support. The people here are just great, so I came out with a clear mind and just did what I could do.”

McCarthy was already thinking about making one more Cup run next year.

“I’d definitely love to come back,” he said. “This is my favorite tournament.”

Hossler might also be back. The 19-year-old from Mission Viejo, Calif., was an honorable mention All-American this year. He’s currently ranked No. 11 in the world.

Hossler shot 2-under 68 Saturday, but was never able to make a move on the back nine, shooting 1-over coming in.

Drakeford, meanwhile, won’t be back. His victory comes in one of his final amateur tournaments. He will play the Western Amateur in Chicago next week before returning home to Australia to gear up for the European Tour’s qualifying school, which begins in late September.

“This is a big confidence boost,” said the world’s third-ranked amateur player. “I’m really looking forward to getting out on Tour.”