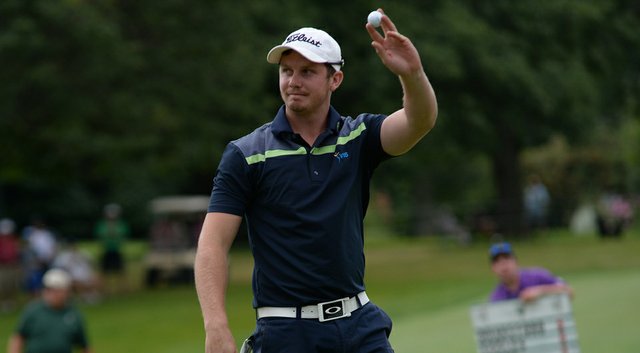 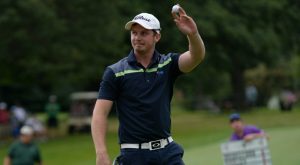 Geoff Drakeford during the final round of the 56th Porter Cup at Niagara Falls Country Club. (Alexander Fisher)

After a third-round leaderboard that featured Australians in three of the top five spots, one managed to walk away with the prestigious title.

Australian Geoff Drakeford held on to win the 56th annual Porter Cup at Niagara Falls Country Club on Saturday by a single shot over Denny McCarthy of Rockville, Md., and eau Hossler of Mission Veijo, Calif.

“It feels really good,” Drakeford said. “It’s been a long while since a ‘W’ has come around. It’s a great feeling.”

Drakeford maintained a two-shot lead for most of the front nine with fellow Aussie and housemate this week, Ben Eccles, giving him a run on the front nine, but only moving within two shots of the lead after a birdie on No. 7.

Drakeford moved to double digits with a birdie on No. 3, only to give it away on No. 4 – keeping the field well within reach. The Aussie would respond by moving to 11 under with birdies on Nos. 5 and 10.

But that’s when things got a bit tighter.

Drakeford made bogey on the par-5 11th after a perfect drive in the middle of the fairway. He then went on to double bogey the par-3 12th after sailing it over the green and three-putting – dropping him into a tie for the lead with Hossler.

Hossler, in the penultimate pairing, went in the water off the tee on No. 13, but recovered to save par. Drakeford made a nice 5-footer for birdie on the same hole a group later to take the lead for good.

McCarthy was also making a push for Drakeford’s title – six groups ahead. He shot a bogey-free, 5-under 65 – the low round of the day – to jump back into position and post his 7-under 273 total, but it was not enough.

Once again, Drakeford had fellow competitor and Aussie Jarrod Freeman on the bag Saturday.

Drakeford and Freeman kept it light most of the day, but made their most tactical decision of the afternoon on the 17th tee. They decided to play it safe after the long-hitting Drakeford thought driver would be too much with the wind at his back.

“We agreed on an iron, and stuck to it,” Freeman said. Drakeford went to the 72nd hole with a two-shot lead.

A poor tee shot off the tee on with his 8-iron, Drakeford found the bunker. He two-putted for bogey and a 1-over 71. He becomes the first Australian to win the green jacket since Simon Nash in 2002.

Drakeford, No. 67 in the World Amateur Golf Rankings, will move on to play in the Western Amateur next week at Beverly Country Club in Chicago. That will be his last amateur event before making the transition to professional golf. He will attend European Tour Q-School in the fall.

“It’s a confident booster for getting out,” Drakeford said. “I’m really looking forward to it (pro golf).”