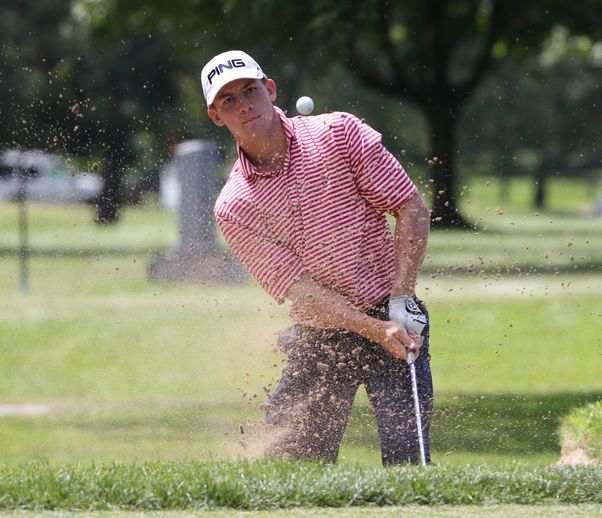 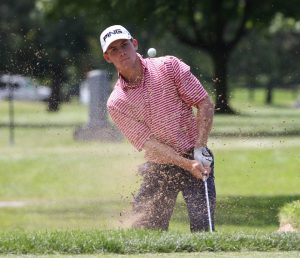 Tyler Dunlap hits out of the sand on the 11th hole en route to a birdie during the second round at Niagara Falls Country Club. (James P. McCoy/Buffalo News)

Attack the par 5s and driveable par-4 15th hole, then dont force anything on the rest of the course.

So far, hes executing it flawlessly.

Dunlap has made birdie on holes 3, 11, 13 and 15 each time through the first two rounds of the 55th Porter Cup, helping him to consecutive rounds of 5-under 65 that has him in the lead at 10-under 130, one shot clear of Justin Shin.

Youve got four holes that you can get after, so you have to take care of business there, said Dunlap, a 20-year-old from Trophy Club, Texas, playing in his second Porter Cup. Its kind of boring, but its a good way to play it. Im just trying to execute on those holes.

Dunlaps only slip-up in the first two rounds has come on the No. 1 handicapped hole at Niagara Falls, the par-4 fifth, which he has bogeyed each day.

I have to try to do a little bit better there on the weekend, he said, but I just have to keep doing what Im doing. I like the course. Im playing it well.

Thats a bit of an understatement. Dating back to last year, Dunlap has shot 65 in four of his six Porter Cup rounds. He opened and closed last years tournament with 5-under rounds, but shot 72-69 in between to finish in a tie for fifth.

I didn’t like the way I played the middle two rounds last year. I felt like I got in my own way during those two rounds, he said. So I feel like if I just play confidently and use my game plan, I think it will continue to work.

Dunlap had shoulder surgery for a torn labrum in November, but still was able to earn honorable mention All-American status as a sophomore at Texas A&M. Hes ranked 101st in the latest Scratch Players World Amateur rankings and coming off a ninth-place finish in last weeks Southern Amateur.

While hes pleased with how hes been playing, his approach has been very business-like.

You put 80 great players on any golf course, theres going to be a lot of low numbers.

Shin, the first-round leader from Hamilton, Ont., backed up an opening round of 64 with a 3-under 67 Thursday.

He again blitzed the back nine, shooting 31 coming in. Hes 10-under on the back nine and 1-over on the front in the first two rounds.

I guess so, he said with an awe-shucks grin when asked if he liked the back nine. I got momentum going again.

The 21-year-old did so by making a birdie on the par-4 10th, which had the tees moved forward Thursday. He followed that with an eagle on the par-5 11th, tucking a 250-yard hybrid second shot to within 5 feet for an eagle.

Shins back nine could have been even better. He missed birdie putts of less than 6 feet on the 13th, 14th and 16th holes.

I had a lot of opportunities, but it was ok. You cant make every putt, he said. I was happy to give myself a lot of chances.

Three shots back of Dunlap sits 18-year-old Beau Hossler of Mission Viejo, Calif. He was happy to salvage a round of 2-under 68 that moved him to 7-under 133 for the tournament.

I played the golf course a lot differently today because I was in the trees on like every hole, said Hossler, who redshirted in the spring at the University of Texas. I scrambled. I got a lot out of my round, and thats all I can ask for. I really didn’t hit the ball well at all.

Hossler’s missed opportunities included pars on all three par-5 holes. He dropped shots at the par-3 seventh hole and difficult par-3 16th, but made four birdies thanks largely to laser-like wedge play.

You just gotta keep posting under par rounds, that’s the key, he said. It’s going to be tough to be in contention if you turn in an over par round out here. The golf course is very gettable, especially with the greens being pretty soft and pure as they are. You can make a lot of putts.

Watt, a 23-year-old Australian player ranked 11th in the world by the Scratch Players, tied for the low round of the day with a second-round 65. He’s in fifth place, one shot behind Pendrith, a 22-year-old from Richmond Hill, Ont., who is at 6-under 134. Williamson, from Jupiter, Fla., is part of a group of three players tied for sixth place at 4-under.