Eagle on No. 17 boosts Harvey into Porter Cup lead 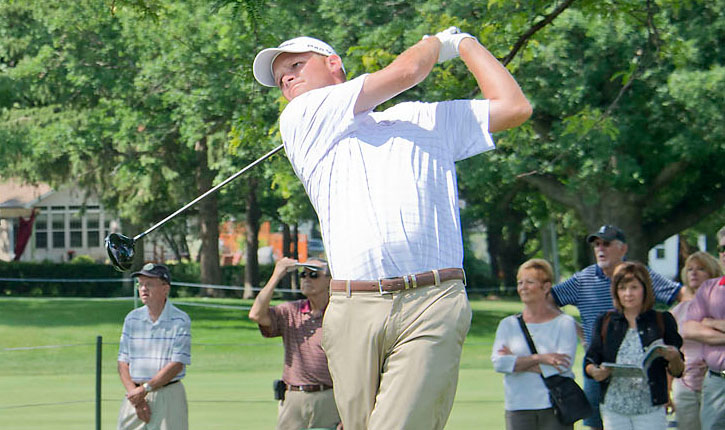 Scott Harvey got to the tee on the par-4 17th hole at Niagara Falls Country Club on Wednesday with his usual plan.

That’s how difficult No. 17 – with out of bounds looming on both sides of the fairway – can be.

Harvey, though, did much better than that during the first round of the Porter Cup. His 7-iron from 175 yards out found the bottom of the cup for an eagle, the highlight of a 6-under round of 64 that gives him a one-shot lead after 18 holes.

“You can’t see it from the fairway. You can see the top of the flagstick, but that’s it,” Harvey said. “I knew I hit a decent shot. I definitely didn’t think it was in. … Generally with that hole, I just plan on making a five, it’s such a hard hole. I make five way more than I make four, so to make a two, that’s crazy.”

Harvey followed up his eagle with a long birdie putt on the par-3 18th hole.

“Today could have been even par just as easily as it was a 64,” he said. “I had a couple bad bounces here and there, but I had some really good things happen right there at the end.”

Harvey knows how important the closing stretch of holes at NFCC can be. The 37-year-old mid-amateur from Kernersville, N.C., is playing in his seventh Porter Cup. While it may surprise some that a mid-am is leading a field of some of the best amateur players in the country, it shouldn’t be a surprise that it’s Harvey.

In the past year alone, he’s won the United States Golf Association’s Mid-Amateur – getting an invitation to this year’s Masters – and the South American Amateur championship.

“About a year and a half ago I changed my swing just a little bit,” Harvey said, trying to explain the run he’s been on. “I held the clubface a little more square up top. That’s enabled me to play better in bigger events. My misses aren’t as bad and I’m just a little bit more consistent.”

Harvey, who works in real estate in his home state, is one shot up on fellow North Carolinian Trevor Cone and Pittsford’s Gavin Hall after the first round. Cone, a 22-year-old graduate of the University of Virginia, closed with a ridiculous stretch of 5-under on the final five holes. That included an eagle on the par-4 15th hole, his second eagle of his round. Cone needed just 13 strokes over the last five holes.

“These guys are all great players,” Harvey said. “They’re going to go low. It doesn’t matter the course or the condition. There’s going to be some really low rounds tomorrow and the rest of the week, so I’m not really getting ahead of myself. … My mindset was just to play really well to keep up with the kids. I’m off to a good start, but there’s a long way to go.”

Among the three players at 4-under and two strokes back is Blair Hamilton, a 21-year-old from nearby Burlington, Ont., who last week made the cut at the RBC Canadian Open at Glen Abbey.

“It was a pretty special experience,” Hamilton said. “I live about 15 minutes away from Glen Abbey. To have the hometown crowd, so many friends and family out there watching and supporting me … it was really kind of living out a dream.”

Hamilton, a 21-year-old senior at the University of Houston, also picked up a new putter at the Glen Abbey pro shop, and so far it’s been a wise investment. Starting with a 15-footer for birdie on the second hole, he knocked in six more birdies during his round, several on long putts.

Five more players sit three shots back at 3-under 67 on a day when the scoring average of 78 players was just over par, at 70.74. In the group at 3-under is 21-year-old Ryan Troyer of Dover, Ohio. He got into the field of this Porter Cup the hard way, by shooting a 68 at last month’s qualifying tournament.

Troyer jump-started his round with an eagle on the par-5 third hole when his second shot left him just a 10-foot putt. He followed that with birdies on Nos. 5, 7 and 8 to go out in 5-under 30.

His momentum stalled with a double bogey on the par-3 12th hole.

“I just hit a bad 9-iron in a place I couldn’t hit it,” he said. “I knew I couldn’t hit it there, and I did anyway. … I played well all day. On the back I didn’t give myself as many looks for birdie, but it was a solid round.”

Troyer, who attends Malone University, is ranked 4,379th by the Scratch Players World Amateur Ranking, so it’s safe to call him an underdog in a field with top-100 players.

“I knew I’d have a chance to put up some good numbers this week,” he said. “It is difficult playing with these guys, because you know they’re going to put up these good numbers, but you’ve just got to play your own game. This course really sets up well for me.”