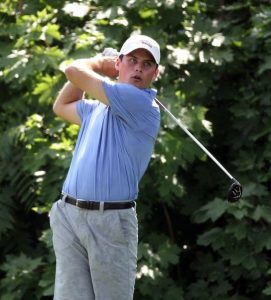 Gavin Hall of Pittsford shot a front-nine 30 and finished with a 5-under 65 to lead the first round of the 58th Porter Cup. (James P. McCoy/Buffalo News)

Gavin Hall wasted no time Wednesday showing why he was considered the man to beat coming into the 58th Porter Cup.

A front-nine 30 at Niagara Falls Country Club gave Hall the early lead, and he held onto it, finishing with a round of 5-under 65.

“All in all, a good first round,” Hall said. “I felt like the golf course showed some teeth today. The scores were a little bit higher. There were certainly times I was not shooting at the pin, because if you’re missing it just a little bit, you’re going to make bogey. I like the way it’s playing this year – I think it’s a good test.”

“Derek and I played pretty solid on the front nine. We were rolling off each other with birdies, and Jared was playing pretty good, too,” he said. “The wind died down for us on the front. Then on the back nine it tended to swirl a little bit.”

Hall’s only dropped shot of the round came on the par-4 15th – a hole that has given him problems in his four previous Porter Cup appearances.

Nevertheless, he holds a three-shot lead over five other players in the 84-man field.

“It’s only the first day,” Hall said. “Tomorrow, put together another good round. There are a lot of wedges out here if you’re playing from the fairway or playing from controlled lies. I think if you get in this rough, it’s hard to judge it. You could fly it. The greens are soft enough where if you’re in the fairway and you’ve got wedges, you can attack.”

Reichert in the hunt: The five players tied for second at 2-under 68 are Tyler Strafaci, Gaston Bertinotti, Jake Shuman, Will Long and East Amherst’s Ben Reichert.

After opening with bogeys on the first two holes, Reichert played 4-under over the last 16.

“I knew I was fine. I was swinging well. I just made a couple bad swings the first couple holes,” he said.

A 20-minute delay on the tee at the par-5 third hole gave Reichert time to compose himself, and he responded with back-to-back birdies to get back to level par.

“I actually made a decent putt for bogey on No. 2 from about 8 feet,” he said. “I just calmed myself down after that.”

Reichert is playing in his second straight Porter Cup.

“Last year, I didn’t do anything great,” he said of his tie for 42nd. “I knew I could compete. There’s no question about that.”

Hold up: A small band of thunderstorms blew over the Niagara Escarpment, delaying play for a short time. Players were called off the course at 3:10 p.m., but back out about 30 minutes later.

“We’ve played enough golf, where we’ve all played in stuff like this,” Hall said. “It was a long day, but at the same time, everyone has got to deal with it who’s playing in the afternoon.”

In the breeze: The great equalizer at Niagara Falls is the wind. The course’s greatest protection is when it’s swirling along the Niagara Escarpment. That was the case most of Wednesday.

“Especially when we teed off, the wind was blowing,” said Reichert, who went off in the third-to-last group at 12:10 p.m.

Shot of the day: The delay came with Reichert on the par-5 11th hole. Two quality shots left him in the front of the green when the horn blew. After the delay, he holed his chip shot for the only eagle of the day at No. 11.

“It was solid,” he said. I’m definitely not out of it by any means, so go fire something low Friday and see what happens.”

Other locals: There are a dozen local players in the field. Lewiston’s Mike Boss is tied for 21st after a 1-over 71 that included a 2-under 33 on the back nine. Williamsville’s Bill Gaffney is tied for 32nd after a 2-over 72.

Back to earth: Just three days after playing in the final group at the RBC Canadian Open, du Toit had to deal with an inevitable hangover.

“It felt a lot more low key, obviously,” he said. “Nerves felt a lot better, kind of what you’d expect, I think. It almost felt like a practice round almost out there today, which was probably bad, because I think I didn’t take it as seriously almost, and made a lot of stupid mistakes.”

“I was just so exhausted after that last week,” du Toit said. “I think I need to smarten up the next couple days.”

Closing stretch: Du Toit was far from the only player to have difficulty on Niagara Falls’ closing three holes – the par-3 16th, par-4 17th and par-3 18th.

Reichert bogeyed No. 16 when his tee shot went just over the green.

“I thought I hit a great shot,” he said. “It was just off the back. If you can play those even or 1- or 2-over for the week, you’ll be right there if you’re playing steady.”

Course statistics: The stroke average for 84 players was 72.94. Just 12 players managed to break par. The toughest hole was the par-3 third, which averaged 3.46. The par-5 third hole was the easiest, at 4.61 thanks to two eagles and 34 birdies.

Schedule: The second round begins at 8 a.m. Thursday. Admission is free. Parking is available off Military Road, with a small fee being collected for the Boy Scouts.