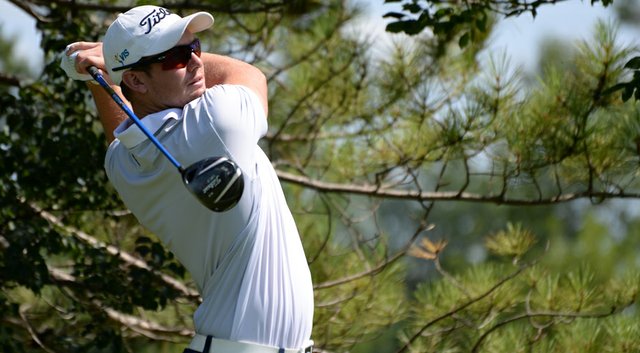 Geoff Drakeford showed no signs of slowing down Friday. 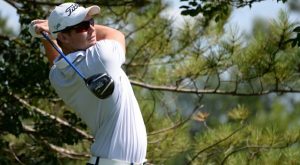 Geoff Drakeford during the third round of the 56th Porter Cup at Niagara Falls Country Club. (Alexander Fisher)

Drakeford, of Australia, fired a 2-under 68 in the third round of the 56th annual Porter Cup at Niagara Falls Country Club to take a three-shot lead into Saturday’s final round.

Drakeford is 9 under for the tournament.

After opening with a pair of pars on Friday, Drakeford used the par-5 third hole to get his round jumpstarted.

With fellow competitor Jarrod Freeman, a fellow Aussie who had completed his third round early in the day, on his bag, Drakeford was able to overcome a poor tee shot on the third, getting his second shot to the green by going under one tree and over a second. He two-putted from there for a birdie.

“We are great mates (he and Jarrod),” Drakeford said. “We just talk, not about golf and it just takes your mind off the whole golf thing.

“… I just really calmed down after that shot on 3 today, and it was good.”

Drakeford took a two-shot lead into the turn and got to double digits under par at the par-5 13th, hitting a 3-wood on a string from 237 yards, setting up a 10-footer for eagle, which he drained.

“From there I thought I was going to keep cruising, but I hit a couple of bad putts coming in,” Drakeford added. His late bogeys came the Nos. 14 and 17.

Others in the final group didn’t bode as well as Drakeford on Friday. Local favorite Gavin Hall finished with a 72 to get in at 4 under, while Denny McCarthy finished at 2 under after a 73.

It was players in the Noon starting time that shot up the leaderboard.

David Boote, a rising junior at Stanford from England, shot his third consecutive 68, while Ben Eccles, of Australia, shot 67 to sit in second at 6-under 204 – three shots back of Drakeford.

“He said to keep the ball in play and not be too aggressive off the tees,” said Boote “And just make sure you have a shot into the green every time.

“I have absolutely taken that advice to heart this week.”

Boote and Eccles will just need to “go low” according to Boote in order to catch Drakeford, who is ranked No. 67 in the latest World Amateur Golf Rankings.

Drakeford will try and become the first Aussie to win the green jacket on Saturday since Simon Nash in 2002.

“I just need to do what I’ve done and stay confident and just cruise my way around and don’t get ahead of yourself,” Drakeford said.