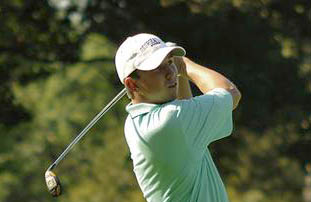 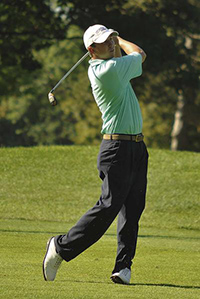 Paul Haley, of Houston, Texas, hits on 11 at the Niagara Falls Country Club during second round action at the 53rd Annual Porter Cup. (Dan Cappellazzo/Niagara Gazette)

He finally made a bogey. And then another. And it hardly mattered.

Paul Haley’s third round at the 53rd Porter Cup wasn’t as flawless as his first two, but it was good enough to keep him on top of a congested leaderboard. The 22-year-old Texan who just completed his career at Georgia Tech shot a 1-under par 69 on Friday at Niagara Falls Country Club to get to 11-under for the tournament and preserve his one-shot lead over soon-to-be Stanford freshman Patrick Rodgers.

“There’s a bunch of low scores out here, so going into tomorrow, I’m just going to try to play the best I can, shoot a low round, and see where that puts me,” Haley said. “I can’t play any defense out here.”

Haley and Rodgers are scheduled to tee off at 12:40 this afternoon, along with Wesley Bryan, who shot 63 on Friday to move up from 32nd place into a six-way tie for third. Bryan birdied four of the first six holes Friday, dropped a 30-foot putt for eagle on No. 11, and got to 9-under for the tournament before a backtracking with bogey on 17.

“I got lucky out there,” Bryan joked after his round. “I’m excited about the opportunity tomorrow. Putting myself in position to win. I guess that’s why we play.”

John Peterson, the NCAA individual champion from LSU who boasted last week that he and the other top players on the amateur circuit were on par with the best PGA professionals, is also among the group at 8-under after shooting 66 Friday. “I still haven’t putted to where I would like to, but I’m right there,” Peterson said. “I’m playing well. I’m feeling good.”

Peterson looped in an 18-foot birdie putt on the 18th hole to card a 66 on Friday that followed his second-round 65, but is still lamenting his opening 71, which he attributes to lack of sleep Tuesday night. He said he got more rest the past two nights, but also benefited from the two-hour rain delay before Friday’s round.

I had to shake off a few beers from last night,” he said.

Peterson will tee off today with Ben Kohles, the ACC Player of the Year from Virginia, and Cameron Wilson, a Stanford sophomore. Kohles and Wilson both made four birdies on the back nine Friday to post 64s.

Australians Tim Hart and Tarquin MacManus are the other players at 8-under. They will tee off at 12:20 with Garrett Rank, who is at 7-under, tied with Cheng Tsung Pan. Dylan Frittelli, Kelly Kraft and Andrew Yun are at 6-under. Ryan Fox, who posted Friday’s best round (63), is one of four players at 5-under.

If Haley continues to save par with such consistency, those players are going to have to post exceptionally low scores to challenge him. Haley played 40 holes of bogey-free golf to start the tournament before a clipped chip shot on No. 5 forced his score to roll back for the first time.

“It’s crazy to think I was going to play 72 holes without a bogey,” he said.

Haley then missed a three-foot putt on No. 6, relinquishing the lead to Rodgers, who made his first birdie of the day. Haley found his groove again on No. 9, getting up and down from 185 yards, then birdied the first two holes of the back nine to move back in front of Rodgers, who made bogey on 10.

“My game was good,” Rodgers said. “I was hitting the ball real well, I just couldn’t get enough putts to fall out there. But I’m right there.”

Coming down the stretch, Haley missed a handful of birdie putts, inching away from a more comfortable lead. “It seemed like there was a lid on the hole for the last seven or eight holes for our group,” Haley said.

Haley came into this week as an unheralded player, only in the field because he had played well in a few recent tournaments and was persistent enough to apply three times to tournament director Steve Denn.

Peterson is hardly surprised that Haley is playing so well. He said the layout at NFCC to Haley’s home course, Royal Oaks Country Club in Dallas, and that Haley has always been at his best in competitions that place a premium on putting.

“He’s a great putter,” Peterson said. “I saw his stat where he didn’t make a bogey in the first two rounds. That’s unbelievable (with) greens like this that are real bumpy. … The course is tough to score if you don’t hit it close. It’s tough to make putts outside of 15 feet.”