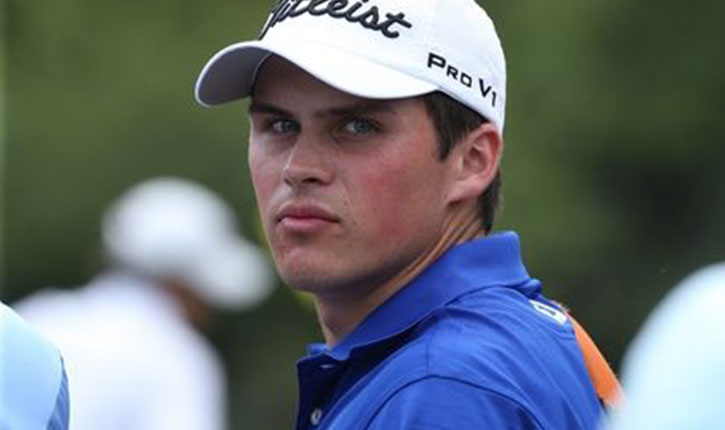 Harvey, Jenkins one back at Porter Cup

It’s shaping up to be a shootout over the final two rounds of the 57th Porter Cup.

A second straight day of favorable conditions along the Niagara Escarpment led to another set of solid scores at Niagara Falls Country Club on Thursday, with Pittsford’s Gavin Hall holding a one-shot lead after 36 holes.

Hall, a 20-year-old junior at Texas who made All-American honorable mention this past season, is at 8-under-par 132 after a round of 3-under 67 Thursday. 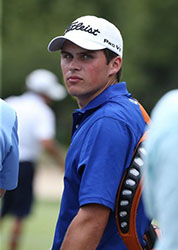 “I’ve always been comfortable on this course,” said Hall, who in his three previous Porter Cups has finished no worse than a tie for ninth. “I’m just happy to be in contention these next couple days.”

Playing in the morning wave – a more-favorable draw as the wind began to gust in the afternoon – Hall came out hot. He birdied his first three holes and it looked for a time like his round could be something special. The momentum stalled, however, with a pair of bogeys as he made the turn at 1-under 34 on the opening nine.

He rebounded nicely with three birdies against only one bogey on the inward nine.

“I was grinding a little bit,” Hall said. “The wind started to pick up on the back nine a little bit more and the pins were bucket, but I made some great putts.”

A key for Hall and any of the other contenders over the final two rounds is how well they play the closing four holes.

“If you can play those under par or at par, I’m really happy,” said Hall, who has done that by going 2-under in that stretch the first two rounds. “I feel comfortable on the greens and have converted a lot of par putts, which has kept the momentum going in my rounds.”

Trevor Cone, a 22-year-old University of Virginia graduate, is also at 7-under 133. He’ll be part of the penultimate group along with his Cavaliers teammate, Denny McCarthy, and South Carolina’s Will Murphy.

McCarthy, the highest-ranked player in the field at No. 8 by the Scratch Players World Amateur Ranking, is at 6-under 134 after a round of 4-under 66 Thursday.

Playing in the same group as Hall, Murphy blistered the back nine with a 5-under 30 to give him a round of 4-under 66.

“I’ve been putting well and hitting good wedges all week, but I just haven’t been in the fairway,” he said. “I got a little bit frustrated at the turn and decided to put the ball in play. From there, it was just good yardages, good looks the whole back nine.”

Hall, Murphy and Alabama’s Michael Johnson (68) were a combined 9-under Thursday.

“We were all feeding off each other,” Murphy said. “Playing with the guy who’s leading the tournament is always good. It gives you a lot of confidence.”

To a man, every player in the field has lauded the conditions of the course. Warm temperatures and wind have dried it out quickly, though, which means tournament organizers have a decision to make on how much water to put down.

“It’s firming up quite a bit,” Harvey said. “The greens are getting pretty speedy. The early rounds tomorrow, somebody could go really low and get back in it if the winds are down. But if it keeps firming up, it’s going to be pretty demanding for everybody.”

Harvey is attempting to become the first mid-amateur (players 25 and older) to win the tournament since Gene Elliott in 1998.

“Today was about the lowest I could have shot,” he said. “I never really gave myself many birdie opportunities.”

Harvey knows that a similar round Friday likely won’t be enough to separate himself on a star-studded leader board.

“That’s pretty much always the way it is at the Porter Cup,” the 37-year-old said. “I’ve got to continue to get everything I can out of my game to keep up with these kids, because they’re going to play good.”

Josh Whalen, a 20-year-old from Napanee, Ont., is at 5-under 135 through two rounds, while France’s Ugo Coussaud and Johnson are at 4-over 134, just four shots off the lead.

“Make lots of birdies,” Hall said of his game plan for the final two rounds. “That’s just how it is here. Everybody’s good, everybody can make birdies. The golf course is in great shape to convert and go low out here.”