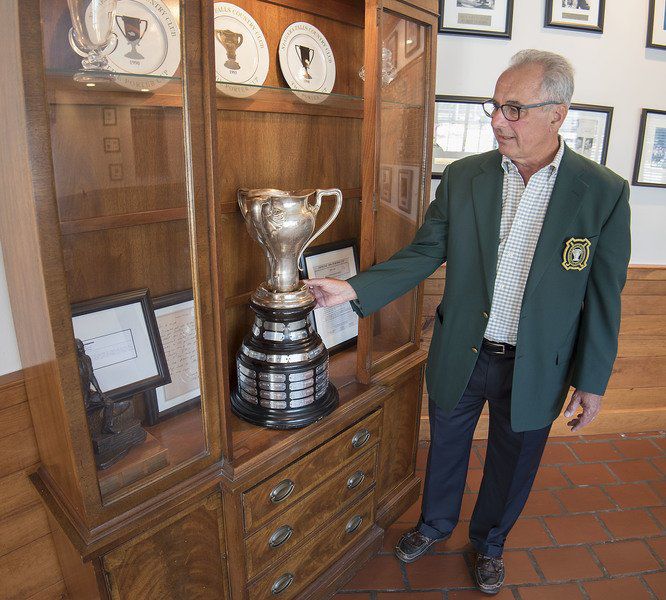 In 1959, you could buy a loaf of bread for 20 cents, go to a movie such as Ben Hur or North by Northwest for a dollar or gas up your average new $2,200 car for 25 cents a gallon and drive to the new golf tournament in town — the International Invitational at Niagara Falls Country Club.

If you were a skilled local golfer, however, you probably would have chosen to play in the City Tournament on the final weekend of August at Hyde Park Golf Course instead of that weird-titled tournament up on the escarpment.

That’s the way it was when what would become the Porter Cup began on Aug. 29, 1959 with a field of 40 players, most of them from Western New York and Southern Ontario, competing over 54 holes.

It was just a dream of one man with a love of amateur golf and a plan for a top-flight tournament on his home course. With the help of other members who shared his passion, the little tournament with the big vision has evolved into one of the top amateur tournaments in the world.

The tournament that started with players from the immediate region now encompasses the international community. This week, as NFCC celebrates its 60th tournament, the roster includes players from Australia, Argentina, Canada, Singapore, Japan, Guatemala, China, the Phillipines and England. And they have been coming for years.

All of this began when Dick Harvey, a club member since 1938, got the idea from scouting the Sunnehanna Amateur that began in 1954 in Johnstown, Pennsylvania. He thought if it could be done there, why not in Lewiston? Harvey, Augustus “Tad” Murray, Dr. William McMahon and Dr. Ed Rozek made up a foursome of organizers determined to make it happen.

The Sunnehanna pioneers envisioned a 72-hole tournament for the best amateurs, a social event in which the players’ wives would be encouraged to attend and the hospitality of the members would be remembered longer than the final scores.

The Porter Cup is all of that, although today’s college players do fret over their final scores. Beyond that, Harvey and company added a couple of signature traditions at the awards ceremony: the green blazer presentation to the winner and drinking champagne from the Porter Cup.

The blazer was Harvey’s idea, borrowed from his favorite tournament, the Masters. The cup was donated by Alex Porter, the longtime chairman of the NFCC Men’s Invitational, and was presented for the first time in 1960 to champion Ward Wettlaufer.

John Konsek of Lancaster, who would eschew a pro career to become a doctor, held off his Western New York rival Wettlaufer in the 1959 tournament. Harvey was fortunate to have those two top players in the ranks. Konsek, as a student at Purdue, beat Jack Nicklaus of Ohio State for the Big Ten championship and split two matches against the man who became a golf legend. Wettlaufer was on the 1959 U.S. Walker Cup team, the only player from Western New York to earn that honor.

The Porter Cup gradually grew as the directors got help from the players spreading the word about the quality of the tournament and the enjoyable experience of playing in it. As Harvey and McMahon recruited players over the years, they enlisted a network of college coaches who talked up the tournament.

If there was a breakthrough, it came when Ben Crenshaw of the University of Texas played here in 1972. He was regarded as the top amateur in the country and was already being touted as “the next Nicklaus.” He won with a 4-under 276 and returned a year later to defend his title in what was his final amateur tournament. He went on to a successful pro career that included two Masters championships.

While the Porter Cup has had a long list of players that went on to success on the PGA Tour, the player most often identified with it for 30 years was Jay Sigel, who earned the label “Mr. Amateur.” Not only is he the only player to win three titles, he holds the record for Walker Cup appearances with nine. He turned pro in 1993 to join the Champions Tour (seniors) and won 20 tournaments but still calls the Porter Cup his favorite amateur event.

In the 90s, Phil Mickelson and David Duval came through, each winning a championship. Tiger Woods played in 1994, finishing tied for eighth, three strokes behind when rain wiped out the final round. As pros, Woods and Duval would go on to be ranked No. 1 in the world. Since then, other Porter Cup players like Dustin Johnson, Jason Day and Justin Thomas would reach golf’s pinnacle.

As the tournament embarks on its 60th renewal this week, there is a new generation of players arriving. This year’s lineup includes 48 who are playing here for the first time.

The opening round of the 60th Porter Cup is scheduled for Wednesday, and the tournament will conclude Saturday.