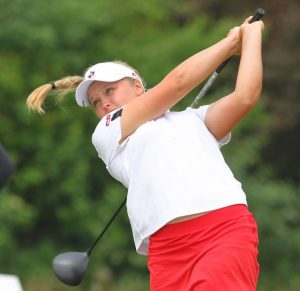 Brooke Henderson, 16, is slated to play in the U.S. Women’s Open next week at Pinehurst No. 2.
(Mark Mulville/Buffalo News)

LEWISTON – There was only one question to ask after Brooke Henderson’s sublime final round Friday at Niagara Falls Country Club.

Just how are there two amateurs on earth ranked higher than her?

Henderson, No. 3 in the World Amateur Golf Ranking, played one of the best rounds ever at NFCC, shooting a 9-under-par 62 to overcome a nine-stroke deficit entering the final round and win the second Women’s Porter Cup with a three-round total of 8-under 205.

“The last couple days I was really struggling score-wise, but I was hitting the ball well. Today, I kept that going. I hit the ball pretty good,” said the 16-year-old from Smiths Falls, Ont., submitting an entry for the understatement of the year. “Unlike the other days, I was able to make some putts, which really kept me rolling. I’m really happy with my round today.”

If ever an athlete was in “the zone,” it was Henderson on Friday.

“I was,” she said. “Nothing could distract me.”

That included a rain delay early in the afternoon that stretched more than an hour.

“It actually helped me refocus,” she said of the stoppage in play. “It made me keep my mind on what I wanted to do.”

That was to go really, really low.

Henderson, who’s entering her senior year of high school, made five birdies and two eagles on the back nine during her round, winning by three strokes over second-round leader Jennifer Ha – her teammate on the Canadian national women’s amateur team – and 17-year-old Princess Superal from the Philippines. The 62 set a Women’s Porter Cup record by three strokes, and is believed to be the course record for a female at NFCC.

“She played that well every day, but today she capitalized on her chances,” Canadian amateur team coach Tristan Mullally said. “I’m really proud she’s done this, because she’s proved to herself – more than anybody else – that she can go low when she needs to.”

Henderson got off to a blistering start, going 6 under through her first 11 holes. She tied for the lead at 5-under with a long eagle putt on the par-5 11th hole by draining a 40-foot putt.

“I was just trying to lag it up there to make birdie, and the next thing I know, it dropped in,” she said. “It was a long one.”

Ha, meanwhile, got off to a miserable start.

She entered the day with a three-stroke lead, but dropped three shots by the turn. A birdie on the par-5 12th hole briefly gave her a one-stroke advantage back, but she lost that by three-putting from 15 feet on the par-3 13th hole.

“It was just one of those days. I wasn’t putting great. I was hitting the ball fine, but I got myself into a couple tricky spots and didn’t shoot as well as I’d hoped,” she said. “On 13, I got a little bit aggressive with my birdie putt. I only had 15 feet and I was really trying to make it. I knew Brooke was making a move. I rolled it 3 feet by. It was a careless mistake.”

Still, Ha remained only a shot back until reaching the par-3 16th hole. Her tee shot landed on the green but well short, giving her a 50-foot uphill birdie putt. She wasn’t able to convert, then dropped another shot by leaving her par putt on the edge of the hole – a common occurrence all day.

“Definitely the worst round she could have had in terms of the way she played. She missed a lot of short putts,” Mullally said of Henderson’s 3-over 74. “The guys here have done a great job to get this golf course in this condition with the weather, but the greens can be a little bit erratic. You need a little bit of luck, and Jen just didn’t get that today.”

At almost the same time as Ha three-putted, Henderson hit a 5-wood to 15 feet on the par-5 17th hole and went on to make the eagle putt and establish a four-stroke lead.

“I’m really happy for Brooke,” said Ha, a 20-year-old from Calgary who won the Mid-American Conference championship this spring with Kent State.

“I know she’s a great player and this is going to give her a lot of confidence.”

Henderson opened the tournament with a 4-over 75, and was tied for 16th place after the first round. Mullally’s job was to convince her she hadn’t played herself out of the tournament. “As time came around, she knew if she had a good round Thursday, it might give her that opportunity. Nobody expects to shoot 9-under-par, but the fact that she has … it’s incredible,” he said.

Henderson had some help from two supremely qualified caddies during the tournament. For the first two rounds, Steve Denn, the men’s Porter Cup tournament director, was on her bag. In the final round, Henderson’s sister, Brittany, did the job. Brittany Henderson interned last summer at NFCC and plays on the Sun Coast Ladies Tour in Florida.

“He was a great caddie,” she said. “It was all on me the first couple rounds. He was awesome, but I love when my sister’s on the bag.”

Brittany Henderson caddied for her younger sister last week during the LPGA Tour event in Waterloo, Ont., and will be on the bag again at the U.S. Women’s Open next week at Pinehurst No. 2 in North Carolina. Henderson made the cut as a 15-year-old in last year’s U.S. Women’s Open at Sebonack Golf Club on Long Island.

“We have a really strong bond, and I love when she’s there,” Brooke Henderson said. “This was such a great atmosphere, and it’s a huge confidence booster for me.”

It was a good day all around for those at NFCC, as member Mike Boss won the Buffalo District Golf Association’s men’s Match Play championship, 1 up, over Chris Covelli (Wanakah) at Transit Valley Country Club.

Boss was back at NFCC in time to carry the scoreboard for Henderson’s group during her win.