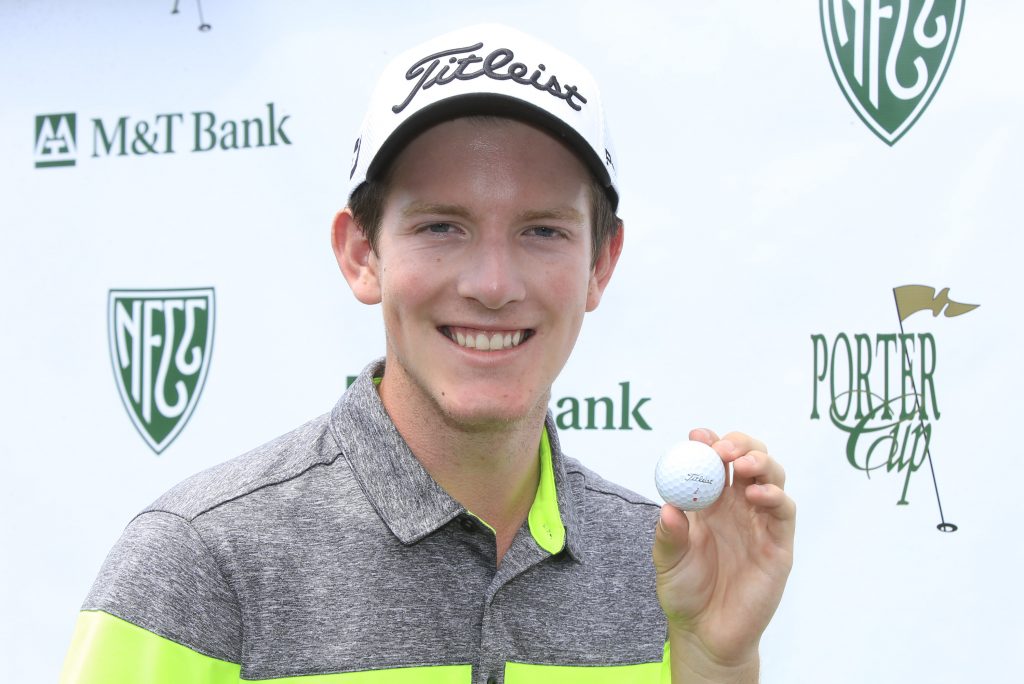 As he watched his brother on the 18th hole from the gallery Friday, a fan offered Billy Hanes some solace.

“Hey, at least you can drink beer,” he told him.

After three rounds of the 58th Porter Cup at Niagara Falls Country Club, the 30-year-old Hanes needed one. 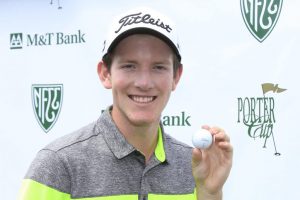 David Hanes made his first career hole-in-one during the third round of the Porter Cup at Niagara Falls Country Club. (Harry Scull Jr./Buffalo News)

David poured it on during the third round, finishing at 2-under 68 in a round that included his first career hole-in-one. That came on the par-3 seventh hole, with a 6-iron.

“It was 181 yards into the wind,” David said. “The pin was tucked right behind the bunker, so you couldn’t really see it. I didn’t see it go in. It was nice and high, pure. Bounced right in front of the hole, then I saw people raising their hands and going crazy. I went nuts. I was high-fiving everyone around there. It was like a dream. I couldn’t think of a better way to get a hole-in-one.”

Even if it dented his chances at bragging rights, Billy offered praise of his younger brother’s game.

“He’s just very solid,” he said. “He doesn’t do anything crazy, like ‘oh wow, he hits a drive that far.’ He just plays solid, consistent golf, which is important out here. There’s a lot of shots you can get in trouble. I know it doesn’t look like it, but you hit a bad shot on a lot of these holes and it’s a big number just waiting.”

David has improved his score each day, from 75 to 72 to 68. His second round was undone by a double bogey on the par-4 sixth hole, but he cleaned up any such mental lapses Friday, erasing three bogeys with three birdies to go with his ace.

“I’m learning the course,” he said. “I haven’t played here too much, but every single day I’m learning what to do more and more. Getting used to the greens I’d say is the biggest thing.”

A graduate of St. Francis High School who will play for Canisius College in the fall, David is coming into his own this summer. He won the International Junior Masters earlier this month, followed that up with the Buffalo District Golf Association Junior Stroke Play championship and also qualified for the New York State Amateur. To get into this week’s field, he shot a 3-under 67 at the qualifier last month.

He admitted teeing it up Wednesday in the first round was as nervous as he’s been on a golf course. But things got better in the second round.

“I didn’t really feel any pressure,” he said. “It just felt like a normal tournament.”

Billy can relate to those feelings. He still remembers those nerves during his first Porter Cup experience, which came as a 16-year-old in 2002.

“I believe I birdied the first hole,” Billy said, “and I freaked out. I think I ended up shooting 79. Even now, it’s nerve-racking to be out here. It’s the Porter Cup, so it’s a big deal.”

That’s why it’s so special for the Hanes family to see the brothers going head to head.

“I was thrilled when he qualified,” Billy said. It was great when they put us back to back on the tee times the first couple of days, so we could eye each other up. It’s cool to be here at 30, playing in it again. I’m just happy to be here, you know?”

Billy shot a round of 6-over 76 Friday, with his round coming unglued with a triple bogey on the par-4 17th hole. A short time after finishing out, he could only smile as his brother poured in a 40-foot birdie putt on the 18th green, drawing a nice round of applause from the gallery.

“I tapped it like a 5-foot putt,” David said. “I just watched it roll and roll and go in.”

“This is going to help him even more, to play pretty solid here,” Billy said. “That’s a whole other level. … He’s finding himself for sure, and this week further illustrates that. He can hang with these guys.”

With a smile tattooed across his face following his round, he couldn’t wait to needle his brother about the ace. Billy doesn’t have one yet in his career.

“There will be some trash talk,” David said. “I just want to beat him. So bad.”