It’s hook’em ’Horns at top of Cup board 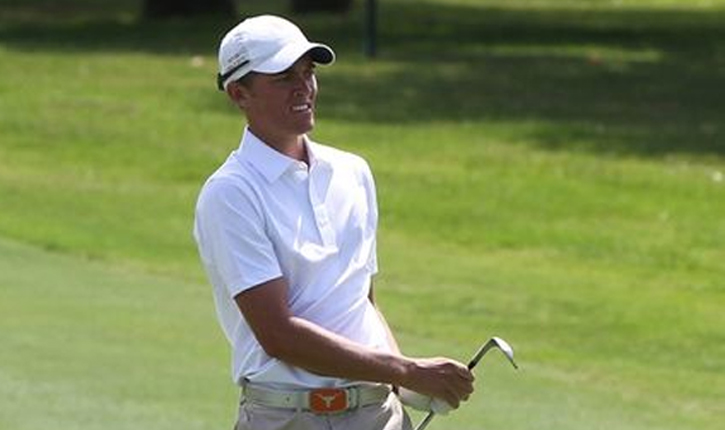 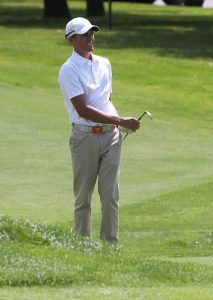 A couple of young guns from the University of Texas shot themselves to the top of the leader board after the first round of the 56th Porter Cup on Wednesday at Niagara Falls Country Club.

Pittsford native Gavin Hall holds a one-shot lead after an opening round of 6-under-par 64. Hall, who will be a sophomore with the Longhorns, is ahead of 18-year-old Taylor Funk of Ponte Vedra, Fla., an incoming freshman with the Longhorns.

Although he’s only 19, Hall qualifies as a Porter Cup veteran in his third appearance.

“I feel comfortable with the golf course,” he said. “This is my third time around … so that makes a difference, for sure. I’m just happy I got a good round in.

Hall started hot on a cool day on the Niagara Escarpment, holing a 15-footer for birdie on the par-4 first hole. He backed that up with an eagle on the par-5 third hole, hitting a 4-iron from 228 yards on his second shot to within 10 feet, then draining the putt.

“I’ve always been right around even par after my first round, so I wanted to come out this year and really play a good round in the first and second if I can,” he said. “I just have a lot of fun here.”

Hall reached 5-under on the front nine after a birdie on the par-4 eighth hole, but then dropped his lone shot of the day with a bogey on the par-4 ninth.

No matter, though, as he responded with back-to-back birdies on the par-4 10th and par-5 11th holes.

“That was really important, especially in the middle of the round,” he said. “It could have went two ways. That birdie on 10 was probably the biggest point in my round.”

Hall said the combination of thick rough and blustery conditions meant hitting fairways and greens was at a premium.

“Just giving myself a lot chances,” he said was the key to his round. “If you’re chipping a lot, it’s not easy. … Fortunately, the greens were a little receptive, so that helps. But that won’t be the case come the third and fourth rounds.”

Funk, the son of eight-time PGA Tour winner Fred Funk, made the turn at 4-under 31 before dropping his first shot at the 10thhole. He responded with a run of three straight birdies on holes 11 through 13.

“I played solid,” he said. “I could have been a little sharper with the full game, but the short game was really good.”

That included holed putts of more than 20 feet on the eighth, ninth and 12th holes, none of which are usually prime birdie chances at NFCC.

“You don’t expect to make those,” Funk said. “You’re just trying to get them close, so when they go in, it’s always nice.”

While Hall qualifies as a veteran, Funk is a Porter Cup rookie. He came into the week struggling with his swing, and actually walked off the course during his practice round Monday.

It wasn’t until the back nine of Tuesday’s Ham-Am that something clicked.

“I’ve just been getting a little steep,” he said. “So I’ve been trying to shallow it out and swing more right. I played well on the back nine yesterday and it carried over to today.”

Australia’s Simon Viitakanga is alone in third place after a round of 4-under 66. Viitakangas’ round was highlighted by an eagle on the par-4 15th hole, when he drove the green to 10 feet and knocked in the putt. There was an Aussie invasion at the top of the leader board, as three of Viitakanga’s country mates are also in the top 10. Geoff Drakeford and Ben Eccles are part of a tie for fourth place at 3-under 67, and Dale Brandt-Richards is part of a tie for 10th at 2-under 68.

East Amherst’s Patrick Sheedy Jr. is low among the seven local players after the first round. He carded a 2-over 72, and is in a tie for 37th. The rest of the local players in the field include: Silver Creek’s Jamie Miller (3-over 73), Clarence’s Matt Stasiak and East Amherst’s Danny Yustin, both at 4-over 74, Lewiston’s Mike Boss (5-over 75), East Amherst’s Raman Luthra (6-over 76) and Niagara Falls Country Club champion PJ Alterio (7-over 77).