How this Aussie is following in the footsteps of Jason Day

There are two proven routes for Australians to follow toward a career in pro golf. There’s the Adam Scott path, which entails honing one’s game in the homeland and then entering “finishing school” at a U.S. college, in his case UNLV. And then there’s the route followed by Jason Day, who never entered a U.S. college and instead made the jump straight to the pro level after evolving in Australia and on the U.S. summer amateur circuit. 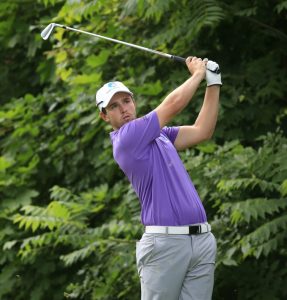 Australian Harrison Endycott tees off on the 16th hole during round two of the Porter Cup at Niagara Falls Country Club. (Harry Scull Jr./Buffalo News)

Harrison Endycott has chosen to follow in Day’s footsteps although a number of major U.S. college programs would have an interest. There’s no arguing with the route the 20-year-old from Sydney has elected to follow.

Endycott arrived in the U.S. on a hot streak, having won four of his last six Aussie events. He’s positioned to take a run at becoming the third Aussie to capture the Porter Cup after a sizzling second-round 64 Thursday morning drew him within two shots of leader Gavin Hall.

“There were some fairer pins out there,” Endycott said. “If you’re in the right spots you can take advantage of them.”

Endycott is on a 2 ½-month tour of the U.S. that will extend through the national amateur. It’s a setup that he views as the best of both worlds.

“I wanted to stay back home and represent my country and lucky enough … I actually had four wins out of six in my country back home and then I got picked on the Australian team,” he said. “So it kind of just made me stay, and we do a bit of traveling, which is good. Just happy to be over here playing all the summer golf and I love coming over here.

Aussie’s have carved out a presence at the Porter Cup. Scott and Day played here, with Day finishing as runner-up in 2005. Geoff Drakeford (2014) and Simon Nash (2002) won here.

“I think it’s just the people,” Endycott said. “We get treated so well in the U.S. and Australians just love coming over here. It’s amazing how you can play a tournament and stay with a great host family.

“I think all the Australians just can’t wait to come over here and play golf.”

Endycott’s game has been rock solid. He made eight birdies Thursday against two bogeys. He seems poised to make the jump to a pro career.

“At the moment I think I’m going to play another year out as an amateur,” he said. “To be honest with you I’m just talking to the right people and just going to be sticking to what I’m doing and I think I’ll know when I’m ready and my team around me will know when I’m ready. We just got to keep plugging away, keep playing events over here and hopefully have just a good amateur career so we get some opportunities.”