Mike Boss continues to lead the local contingent through three rounds of the Porter Cup. 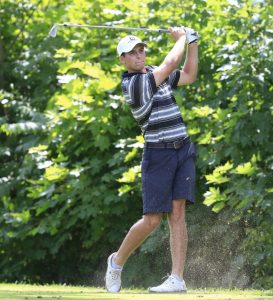 Boss shot a round of even-par 70 Friday at Niagara Falls Country Club.

“It was all right,” Boss said. “I could have scored a lot better. I had a couple bad bogeys on the back nine that shouldn’t have happened. I really rolled the ball. I was putting well today. I actually hit a lot of really good shots. I feel like I played better than my score reflected.”

Boss said the pins Friday were more accessible than the first two rounds.

“It was gettable today,” he said. “A little easier than the past two days, I thought. I’m curious to see how low some guys can take it.”

Boss is currently 2-over for the tournament, in a tie for 36th. The goal for Saturday’s third round?

“Get it in red numbers,” he said. “I’m 2-over for the tournament, so 67, I’m under par. I can do that. Make some birdies tomorrow and minimize the mistakes.”

Even though he’s just 23, Boss is playing in his sixth Porter Cup. He’s got a career-low round of 66 in tournament play, and 65 outside the Porter Cup. The recent graduate of Flagler College in St. Augustine, Fla., finished fourth in the 2016 Peach Belt Conference Championship. He recently qualified for the U.S. Amateur, but hasn’t played in many other tournaments this year.

“So it’s nice to be playing decently well here,” he said.

Elma’s David Hanes moved up to a tie for 48th after a round of 2-under 68 that was the best among the 13 local players in the field Friday.