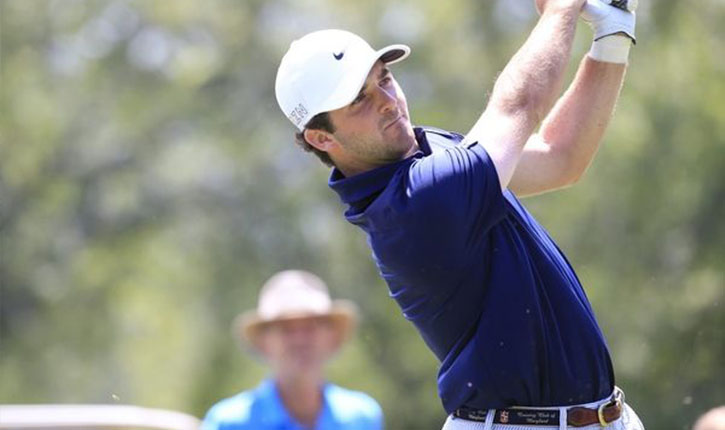 Denny McCarthy knows what it’s like to walk up the fairway on the 18th hole at a major championship.

Denny McCarthy finished off his best Porter Cup yet by winning the championship on Saturday.

It almost feels as good as what he experienced Saturday at Niagara Falls Country Club.

McCarthy, a recent University of Virginia graduate, won the 57th Porter Cup in his final appearance of the prestigious amateur tournament. A bright future in professional golf awaits, but saying goodbye to his favorite amateur event with a win in his fifth and final attempt, well, it just doesn’t get much better than that.

“I’ve dreamed about this moment,” McCarthy told the crowd shortly after slipping on the winner’s green jacket. “I can’t describe how sweet it feels.”

With two previous runner-up finishes, the 22-year-old from Rockville, Md., will go down in history as one of the best Porter Cup players in history. So, too, will Saturday’s finish.

Tough-as-nails North Carolinian Carter Jenkins went birdie-birdie on the par-4 17th and par-3 18th holes to force a playoff with McCarthy after each finished 72 holes at 11-under-par 269.

Playing No. 18 again, McCarthy was victorious with a par in sudden death, much to the delight of a massive gallery that had waited out a rain delay of nearly three hours.

“That’s as good as it gets,” McCarthy said. “It rivaled the U.S. Open, walking up to the 18th green at the U.S. Open, just because this place just means so much to me. Actually, it felt better. I love coming here, and it’s a nice way to finish strong.”

McCarthy and Jenkins were part of a final grouping that also included Pittsford’s Gavin Hall, a 20-year-old honorable mention All-American for the University of Texas.

Hall took the lead early in the final round with a two-putt birdie on the par-5 third hole to reach 10-under.

Jenkins, meanwhile, made a mess of the two par-3 holes on the front, making double bogey on both No. 4 and No. 7 after missing the green each time and three-putting.

“I had been doing a good job keeping the double off the card, which can happen so easily out here with as tight as it is, as thick as the rough is and how sloped the greens are,” he said. “Those were just unfortunate.”

That dropped Jenkins to 5-under for the tournament – seemingly out of the running.

McCarthy, meanwhile, was just treading water, with pars on the first six holes. A bogey on the par-3 seventh hole, however, proved to be a wake-up call. Birdies on the next two holes followed, to get McCarthy to 10-under, tied with Hall for the lead going to the turn.

“I hadn’t played particularly well up until that point,” he said. “No. 8 and 9 really boosted my round just to give me a little kick start. I was kind of dull coming out of the gates.”

Jenkins, too, considered a birdie on the par-4 eighth as a turning point.

“It freed me up and I started playing more aggressive golf,” he said.

With the tees moved up on the par-4 10th, Jenkins attacked with a driver that led to a short wedge and a birdie to get to 7-under. Two more birdies followed on the par-5 11th and par-5 13th holes, and just like that, he was even for the day, 9-under for the tournament and right back in it.

Hall made a two-putt birdie on No. 11 to reach 11-under, which was then matched by a birdie from McCarthy on the par-3 12th. At that point, the wind was at its strongest. All three players needed three shots to reach the 13th green, with Jenkins making birdie, Hall saving a par and McCarthy dropping a shot.

After the group hit their tee shots on the par-4 14th, play was halted for a weather delay with 21 players left on the course. Before they went to the clubhouse, however, Hall got a look at where his drive ended up, and it wasn’t pretty. His ball came to rest behind a massive tree just right of the fairway, and he had hours to think about his predicament.

McCarthy did so by taking a quick nap.

“I came out refocused and tried to keep it steady coming in,” he said. “Mentally, I was great today. I felt like I really stayed in the present, really focused on each shot. I told myself to keep breathing … and it really worked out well for me.”

When they came back out to the course just before 6:30 p.m., Hall had a supremely difficult shot ahead of him. He made good contact with the ball, but it caught a tree branch and came to rest just 15 yards in front of him.

He wasn’t able to save par, dropping him back into a tie with McCarthy as the group headed to the par-4 15th hole. For the second straight day, Hall hit a wayward drive, which ended up right of the hole. McCarthy, meanwhile, carried the creek with a perfect 3-wood to split the fairway.

Hall’s second shot sailed through the green into the back bunker, from which he wasn’t able to get up and down.

“You can’t go long on that hole, and that’s what I did,” said Hall, who now has two runner-up finishes in four appearances. “No. 15 seems to get me every time. It was a couple bad holes, but overall for the tournament, I feel like I played really well. This is a great tournament, great support system … and I had a blast.”

McCarthy hit a perfect wedge shot that stopped 4 feet behind the hole.

“I figured it was going to come down to that hole,” he said. “They both hit it right off the tee and I knew they were going to have trouble. … I still had a really tricky down-hill 4-footer that I had to make, so I had to calm my nerves a little there, but that was definitely a huge swing with Gavin making bogey.”

McCarthy took a two-shot lead to the par-3 16th over both Jenkins and Hall, and after Jenkins missed a 5-foot birdie try and all three players made pars, it looked like McCarthy would simply have to avoid the big mistake.

Jenkins, though, had other ideas. He drained a 30-foot birdie putt on the difficult par-4 17th to make sure there would be some drama on No. 18.

“In the Ham Am, I played with a good friend and he said he was going to go birdie-birdie on the last two holes,” Jenkins said. “I was like, ‘Nobody goes birdie-birdie on 17 and 18. So it was kind of ironic I said that earlier in the week and pulled it off.”

He did so by hitting a perfect, three-quarters 7-iron to about 8 feet on the 18th hole and draining the putt. After going out in 3-over 38, Jenkins played the back nine in 5-under 30.

“I was figuring going into 17 if I go par-par, that’ll usually get it done here,” McCarthy said. “I just had a gut feeling when he hit that second shot into 17 and when he was standing over that putt that he was going to make it and I was really going to need to keep steady and play a good hole on 18. … I knew he was going to finish strong. He really elevated his game on the back nine, and I had to try and match him.”

McCarthy two-putted for par from about 20 feet in regulation to set up the first playoff at the Porter Cup since Patrick Rodgers’ victory in 2011.

Both players switched to an 8-iron for the playoff as the wind speed increased. McCarthy had about 30 feet for his birdie putt, while Jenkins came up about 50 feet short of the hole. Perhaps because the adrenaline was pumping, he ran his birdie try 10 feet past the hole, leaving a nasty downhill putt for par.

“Nobody wants that coming back,” he said.

McCarthy, who watched that happen, missed his birdie try by about 18 inches. When Jenkins’ par attempt slid by the hole, all that was left was a tap-in.

“It’s a pretty unique scene,” McCarthy said of the gallery, which had swallowed the 18th green. “I love coming back here. I haven’t been to any other tournament five years in a row, so it says something about the people around here and what I think of this place. It’s incredible.”