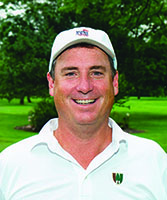 LEWISTON – Mike McCoy’s round of 4-under 66 Wednesday in the first round of the Porter Cup did more than just leave him in a tie for fourth place.

It showed that a Mid-Amateur player (those 25 and older) is not out of place with some of the game’s brightest young stars.

“It keeps me young, I think, to be around the kids,” said McCoy, a 49-year-old resident of West Des Moines, Iowa, who’s playing in his 13th Porter Cup. “It keeps your game sharp. I think that’s all good, healthy stuff for a guy my age.”

The Mid-Amateur field has shrunk in this year’s tournament. Just nine of the 78 players are 25 or older.

There are a few key reasons for that: the family and work responsibilities that come with age don’t often leave much time for tournament golf. That, and the college kids they’re playing against are pretty darn good.

“I started doing all this stuff back in the late ’90s and 2000s, and any event I played in the summer, it’d be a guaranteed top five. I feel like I’m playing better now and I just can’t do that anymore,” said 33-year-old Nathan Smith of Pittsburgh. “They’re just too good. The courses have gotten longer and the guys have just gone to another level.”

Smith, who’s playing in his ninth Porter Cup, might be the most accomplished Mid-Amateur in the country. He’s won the U.S. Mid-Amateur championship three times (2010, ’09, ’03) and represented the U.S. on the last two Walker Cup (the amateur version of the Ryder Cup) teams in 2011 and 2009 against Great Britain and Ireland.

“You’re dealing with a lot as a Mid-Am. You’re married, you have a family, and you’re working. You feel like you should just get a medal for being here for five days in a row,” he said. “It’s tough to find the time. It’s one thing to get here and have five days free and another to compete on this level, which is so good.

“It makes you better. You’re able to learn. I think it pulls you along. That’s why I haven’t totally gone to Mid-Am stuff. Playing in these events with these guys makes me better.”

The last Mid-Amateur to win the Porter Cup was Gene Elliott in 1998. The last to seriously challenge was Skip Berkmeyer Jr. in 2006, who finished two strokes behind eventual winner Seung-us Han in 2006.

McCoy hopes he’s put himself in position to do that this week.

McCoy said he was disappointed to see the Mid-Am numbers drop in this year’s field, but echoed Smith’s sentiments about the quality of their younger opponents.

“The young players have gotten so good, you’re kind of beating your head against the wall most of the time,” he said.

Smith has been the only Mid-Amateur on the Walker Cup the last two times it’s been contested, a change from when there used to be a bigger presence for older golfers on the team.

While their numbers have dwindled, that should not be taken as a sign that Porter Cup organizers would prefer not to have them in the field. In fact, the Mid-Amateurs have one of their biggest supporters in Porter Cup Tournament Director Steve Denn.

“If there were 20 competitive Mid-Amateurs, I’d like to have every single one of them,” Denn said. “With college kids, it’s nice to see them on the pro tour down the road and brag, ‘oh I saw him at the Porter Cup.’ But the Mid-Amateurs, they know the history, they’re more appreciative of the history. They represent what the amateur game is all about.

“I don’t want to invite a Mid-Am just for the sake of inviting a Mid-Am. I want them to be competitive, but I definitely have got a soft spot for them.”

The local contingent of players had a rather disappointing opening round. Mike Boss, the Lewiston resident who’s the Niagara Falls Country Club club champion, had the best round of the day for area players, a 2-over 73 that could have been better if not for a double bogey 6 on the par-4 17th hole.

Boss’ drive went left and was just slightly out of bounds. It was so close, in fact, that rules officials had to use dental floss – tied around the out of bounds markers – to determine whether it was in play.

“I already accepted it was out, was just hoping maybe it was in,” Boss said. “It was kind of a struggle. I didn’t really hit it that great. … Hopefully [today] I can get it back to even.”

Buffalo’s Chris Covelli and Clarence’s Matt Stasiak both shot rounds of 4-over 74, tied for 70th, while North Tonawanda’s James Blackwell and Hamburg’s Brian Jurkiewicz carded 5-over 75s, in a tie for 75th.

There were two late scratches to the field: Minnesota’s Donald Constable withdrew because of pneumonia, while Stanford junior Cameron Wilson pulled out after suffering a back injury.