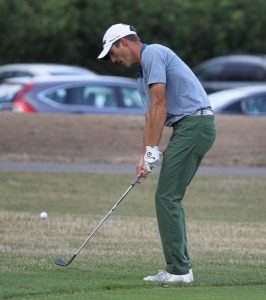 Garrett Rank of Elmira chips onto the ninth green during round one of the Porter Cup at Niagara Falls Country Club in Lewiston,NY on Wednesday, July 27, 2016. (James P. McCoy/ Buffalo News)

Garrett Rank walked off the 18th green to a smattering of applause Wednesday following the first round of the 58th Porter Cup.

Compared to the usual reaction he gets at his day job, that’s a nice change.

“It wasn’t much of a game,” Rank said of the Minnesota Wild’s 7-0 blowout victory over the Sabres. “Still, it was a really cool experience. A lot of my family and friends came down since it was so close to home, so that was a special moment.”

Rank will be back in the First Niagara Center on Sept. 10 when NFL officials report to training camp, which consists of five days of fitness testing, rules classes and on-ice work.

“Not much changes, really,” he said of being assigned full-time to the NHL after working some in the American Hockey League last season. “I’ve got to come ready to work every night. Things happen a lot faster in the NHL than they do in the American League. It’ll be a little bit of an adjustment travel wise, but for the most part it’s just another hockey game and you’re just out there doing your job.”

Prior to hitting the ice, Rank’s got a packed golf schedule. The Porter Cup is his fifth straight week of tournament play, and he’s got four more scheduled to come.

“The job really allows me to hone in on my golf game in the summer,” Rank said. “It would be nice to play golf for a living, but this is second best to that. I’ve got a great job and have no plans of leaving that.”

Rank is making his sixth appearance in the Porter Cup. He opened with a round of 2-over 72 at Niagara Falls Country Club, and sits seven shots behind leader Gavin Hall.

“It’s just a fun atmosphere,” Rank said. “An elite amateur golf tournament so close to home. It’s not much trouble to get here. I’ve got a really good relationship with the family I stay with, and I just enjoy playing competitive golf.”

Rank is coming off a memorable weekend at his national championship. He opened with rounds of 69 and 75 at the PGA Tour’s RBC Canadian Open to make the cut before fading on the weekend at Glen Abbey with consecutive rounds of 76.

“I went into the tournament with the goal of making the cut,” Rank said. “I played a little bit scratchy on the weekend, but it was a great experience and a lifetime memory that I’ll have with my brother (Kyle, who served as his caddy), playing on Sunday. Walking up the 18th green was pretty special in front of the home crowd.

“The Canadian fans get really behind the tournament. They’re really pressing for a Canadian to win it. It’s been a long time. It makes the hairs on the back of your neck stand up. It’s that kind of atmosphere.”

Rank had very little time to soak in the experience. On Monday, he was in West Virginia for a U.S. Amateur qualifier, shooting rounds of 65 and 68 to win medalist honors at Williams Country Club. That qualifies him for a spot in the U.S. Amateur at Oakland Hills in Michigan.

Rank will also play in the Western Amateur, as well as the Canadian Amateur and Mid-Amateur.

“It’s a busy run,” he said with a smile. “I’m kind of getting worn out a little bit, but for the most part it’s pretty fun to play.”