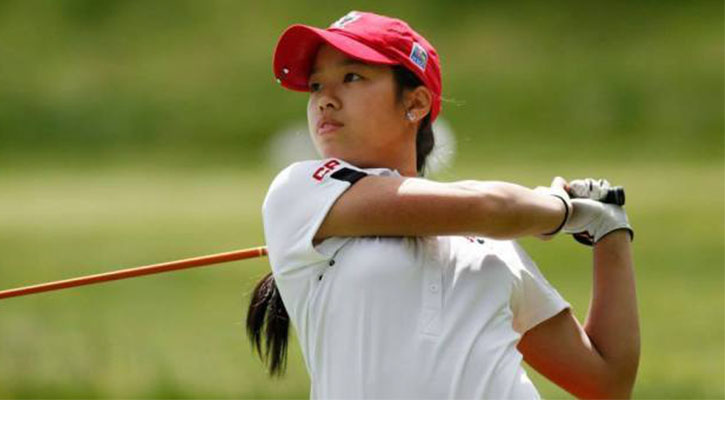 Ohio State’s Jaclyn Lee shot a round of 3-under-par 68 in windy, chilly conditions Wednesday to top the leader board after the first round of the fourth Women’s Porter Cup at Niagara Falls Country Club.

Lee, a 19-year-old from Calgary, carded a 33 on the inward nine to hold a one-stroke lead over fellow Canadian Naomi Ko.

Ko and Lee are teammates on the Canadian national team. Ko’s round of 2-under 69 was highlighted by a hole-in-one on the par-3 12th hole. She was the only other player to break par on a tough day along the Niagara Escarpment.

“There were 25 to 30 mile-per-hour winds,” tournament director Brian Oakley said. “It led to the scores being a little higher than usual, but what it does is it puts the girls who shot 74 or 75 and who might normally be out of it – they’re still in contention.”

Ko, 18, is from Victoria, British Columbia. She recently completed her freshman year at North Carolina State, playing 27 rounds for the Wolfpack with a scoring average of 75.41. She entered this week’s tournament in fine form, having won the Portland Classic Amateur Open last week at Langdon Farms Golf Club in Aurora, Ore. That earned her a spot in the LPGA’s Portland Classic, which will be held later this month.

Susana Vik, a 17-year-old high school senior from Greenwhich, Conn., shot even-par 71 to sit alone in third place. Taylor Totland, a 21-year-old senior at Furman University, is four shots off the lead after an opening-round of 1-over 72. At No. 57 in the Women’s World Amateur Golf Ranking Totland is the highest-ranked American player in this week’s field.

The top local finisher after the first round was Lancaster’s Chelsea Dantonio, who shot a 4-over 75. Clarence’s Cat Peters shot 76 to sit eight shots off the lead.