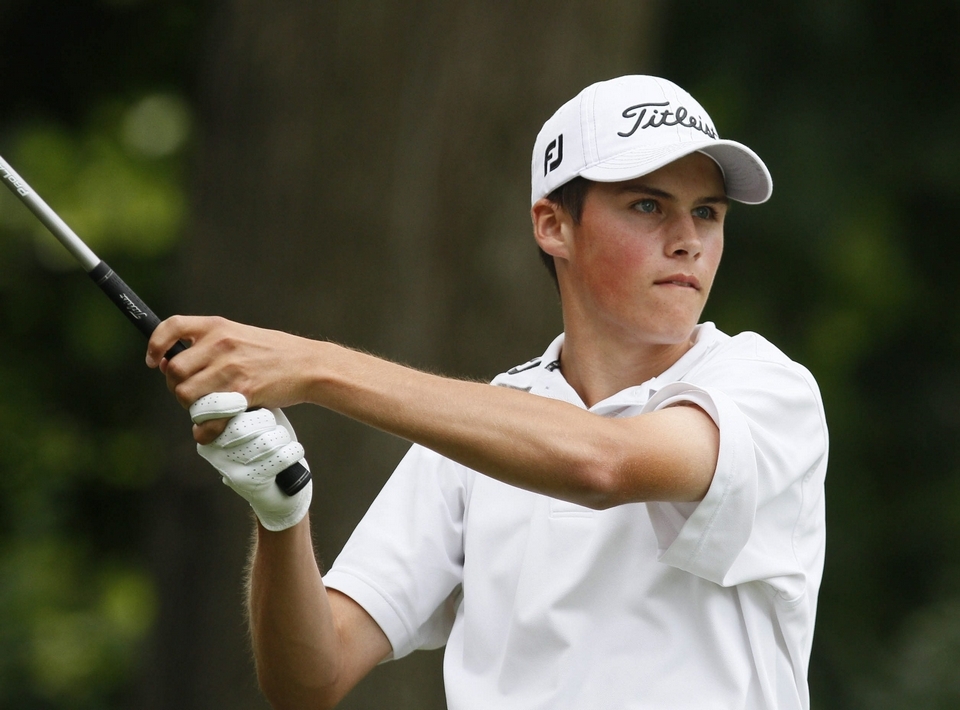 LEWISTON – Gavin Hall is ready to make his long-awaited return to the Porter Cup.

Hall, the 18-year-old Pittsford phenom, is part of a world-class field assembled for the 55th playing of the tournament, which starts today at Niagara Falls County Club in Lewiston.

As a 15-year-old in 2010, Hall finished tied for second behind eventual winner David Chung. He missed the last two years because of a right wrist injury that required two surgeries.

“It’s awesome being back,” Hall said Tuesday before taking part in the annual Ham-Am event. “I’m really appreciative of being 100 percent healthy again and playing summer golf. Being away from the game for so long made me realize how much I love it and how I kind of took it for granted. To be at a top premier event like this during the summer, feeling good about my game, I’m excited to see what I can do this week.”

Gavin Hall watches his tee shot on the par 4 17th hole during the final round of the 2010 Porter Cup. Mark Mulville/Buffalo News file photo

Hall’s remarkable run in the 2010 tournament featured a final-round 65. He shot 9 under over the final two rounds.

“It gave me a ton of confidence, just knowing I could play with Peter Uihlein, with Russell Henley, with David Chung, all those guys,” Hall said. “It was pretty incredible, knowing that if I play well, I can somewhat have a chance with them. .”

Hall, as polite and mature as an 18-year-old could ever be, won the 2011 Junior Players Championship and played on the 2012 U.S. Junior Ryder Cup, but really established himself on a national stage earlier this year when he qualified for and was the youngest player in this year’s U.S. Open field.

“It was a great wake-up call just to see what I need to work on and how I stack up against those guys,” he said. “Ultimately, that’s what I’m looking to do down the road. To have a little glimpse of that is huge as a learning experience.”

Being back at NFCC feels like a homecoming for Hall.

“I get the same feeling being here the last couple days that I did in 2010. The community is awesome,” he said. “Just to have an event so close to home is awesome. I’ve got a lot of family and friends coming. I’m feeling pretty good about my game. The golf course suits my eye pretty well.”

Hall tees off at 11:50 a.m. in one of the featured groups along with Beau Hossler and Charlie Bull. Hossler, a fellow 18-year-old, will be teammates with Hall this fall with the University of Texas golf team. He finished tied for 29th in the U.S. Open in 2012 as a 17-year-old after briefly leading the event.

“It’s going to be a low score that wins it,” said Hall, who enrolled at UCLA in January before leaving the school after just two months and joining the Longhorns in May. “It’s going to come down to how many putts you can make and how close you can hit it. I’m ready to get after it in the first round.

Perhaps the man most happy to have Hall back is Porter Cup Tournament Director Steve Denn.

“I don’t want to say most pleased, but I’m certainly thrilled,” Denn said. “The fact that he’s back to full health, playing well … he’s going to have a gallery following him. A lot of people take interest in Gavin, because he’s an up-and-comer. He’s got a ton of game. Hopefully we have Gavin for not only this year, but a few years to come.”

Denn has established a world-class field for this year’s tournament. Here are six more players to watch:

• Max Homa: The 22-year-old is playing in his third Porter Cup. Homa won the NCAA individual championship in the spring and participated in the U.S. Open. He’s No. 6 in the Scratch Players World Amateur Ranking.

• Sean Dale: The 23-year-old graduated from the University of North Florida in the spring. He was a second-team All-American and winner of the prestigious Jones Cup in February.

• Brandon Hagy: A teammate of Homa’s at the University of California, Hagy is another second-team All-American. He’s ranked 14th by the Scratch Players and might be the longest hitter in Porter Cup history, according to Denn.

• Michael Johnson: The world’s 41st-ranked amateur, the 20-year-old Johnson is making his Porter Cup debut. The junior at Auburn won this year’s Dogwood Invitational, posting a ridiculous 28-under-par score of 260.

• Richy Werenski: The defending champion, Werenski struggled in his junior season at Georgia Tech, but Denn said his game is rounding into form in the summer, as evidenced by a 12th-place finish in the Northeast Amateur.

• Patrick Rodgers: The Stanford junior won the 2011 Porter Cup and finished third last year. He’s the highest-ranked player in the field, at No. 4 in the Scratch Players.