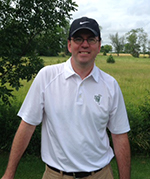 by Pete Wlodkowski of amateurgolf.com

There are tournament directors, and then there is Steve Denn.

Denn oversees the Porter Cup, one of the most important independent stroke play events in the world. The invitational tournament, which limits its field to just 84 of the world’s best players, celebrated it’s golden anniversary in 2008 and will be played for the 55th time at Niagara Falls Country Club on July 24-27, 2013.

To understand Denn is to understand Niagara Falls Country Club and its heritage as a proud booster of the competitive amateur game. In late June, I had the opportunity to play the club with him and learn more about the tournament and what an important part of his life it has been.

It all started for Denn with his father Tom, a longtime NFCC member and wearer of many Porter Cup committee “hats” over the years, including starter. Tom Denn passed away this year, and when I played with Steve he was in middle of the difficult process of writing a remembrance to his father that will be part of the 2013 tournament program. As we walked the fairways, and Denn told me how the young guns play the course – cutting corners I couldn’t dream of and hitting irons into par fives I couldn’t reach in two – I learned about how the Porter Cup hooked him at an early age. Like many tournaments, member families typically host players, and Denn’s household was full of life during tournament week.

“I remember how much I enjoyed the players staying over,” Denn explained. “When the tournament was over and they had long gone, I was sad for the next week.”

For Niagara Falls Country Club and its members to be so giving of their course and time is pretty amazing. Some tournaments have lost their momentum, or disappeared completely because modern day club members don’t understand why they would want to give up their course for a full week. And at Niagara Falls CC – so close to Canada that the Toronto skyline can be viewed from the back deck — the season isn’t particularly long to begin with. But Denn told me the members really enjoy tournament week.

“Our members volunteer and their businesses often sponsor The Porter Cup.” Denn explained. “They also attend a dinner dance and many of them play in the Ham-Am tournament. The course is open late each afternoon during the tournament so between that and the Ham-Am they can play quite a bit of golf if they want to.”

Between volunteering, spectating, and hosting the players, I doubt the members are too worried about playing their own golf during Porter Cup week. And while it’s rare for any but the biggest of amateur golf tournaments to draw galleries of any size, residents of Niagara Falls (and the town of Lewiston, where NFCC is located) embrace the Porter Cup as their own, with fans coming out by the thousands and lining the par-3 finishing hole like a web.com Tour event. The club holds so many events around tournament week that the tournament earns the nickname “The Party Cup” – players participate in the Ham-Am with members, attend a big opening dinner, get to view Niagara Falls from the “Maid of the Mist” and much more.

As we walked the fairways of the tight but relatively short A.W. Tillinghast layout, I learned something else about Denn. He possesses a deep knowledge of the collegiate and amateur game at the highest levels, and he has remained close to many past Porter Cup players and other tournament directors. To select and invite this level of talent Denn has to do a great deal of research and spend time on the phone and email like his predecessors, Dick Harvey, Bill McMahon, and Tad Murray, who founded the tournament in 1959.

Just as a legendary college football program like USC, Michigan, or Alabama has a relatively easy time recruiting top talent, Denn’s role is different but no less difficult – he has to make sure the tournament stays on top and do so in a way that is cooperative with other tournaments. How coveted is a Porter Cup invitation? Each year the tournament holds an open qualifier and draws close to100 players. The 2013 qualifier had 95 players playing 18 holes for a eight spots, with several players flying in or make long drives for the chance to play. This year’s medalist, Bryce Edmister of Rochester, fired 5-under 65 and it took 1- under 69 to get into the field. A player from California (Kevin DeHuff at 67) and a player from Texas (Hagen Barmasse at 69) were among those that qualified.

In 2012, Richy Werenski of South Hadley shot 17-under 263 (including a second round of 62) to edge Denny McCarthy (265) and a trio of players at 267 that included two-time USA Walker Cup team player Patrick Rodgers. Werenski and the rest of the field will be playing 18 holes of medal play per day over four days just like they do on the PGA Tour.

There is only one difference. Once you’re invited to the Porter Cup you don’t get sent home until you’ve played 72 holes. The tournament has no cut.

A Phil Mickelson comeback – just like the Open Championship

Denn and hundreds of NFCC members and local fans likely smiled as Phil Mickelson holed his final putt to come back from 5 down to win the 2013 Open Championship at Muirfield. Because Tiger may not have won the Porter Cup, but Phil did. In 1990 Mickelson came back from 6-shots with a 7-under 63 to win the Porter Cup over David Duval by a single shot.

In 1994, Tiger Woods gave a junior clinic during the tournament. When a young attendee asked his father Earl if he lived in a mansion, the man known to never mince his words replied,

“I live in a house. The mansion is coming.”

The final round was washed out that year and Woods finished T8 at 6-under. Allen Doyle (9-under) won it that year, and Chris Riley finished second.

The history section of portercup.com has one of the most complete online archives in amateur tournament golf. The tournament’s past champions list includes everyone from modern day stars Phil Mickelson and David Duval to legends like Ben Crenshaw and Jay Sigel (a 3-time winner) and just about everyone in between.

Winning the Porter Cup is no guarantee of professional success, but playing in it seems to be a prerequisite, because a list of who has competed over the years includes just about every major American Tour star, Walker Cup team member, and dozens of major champions.