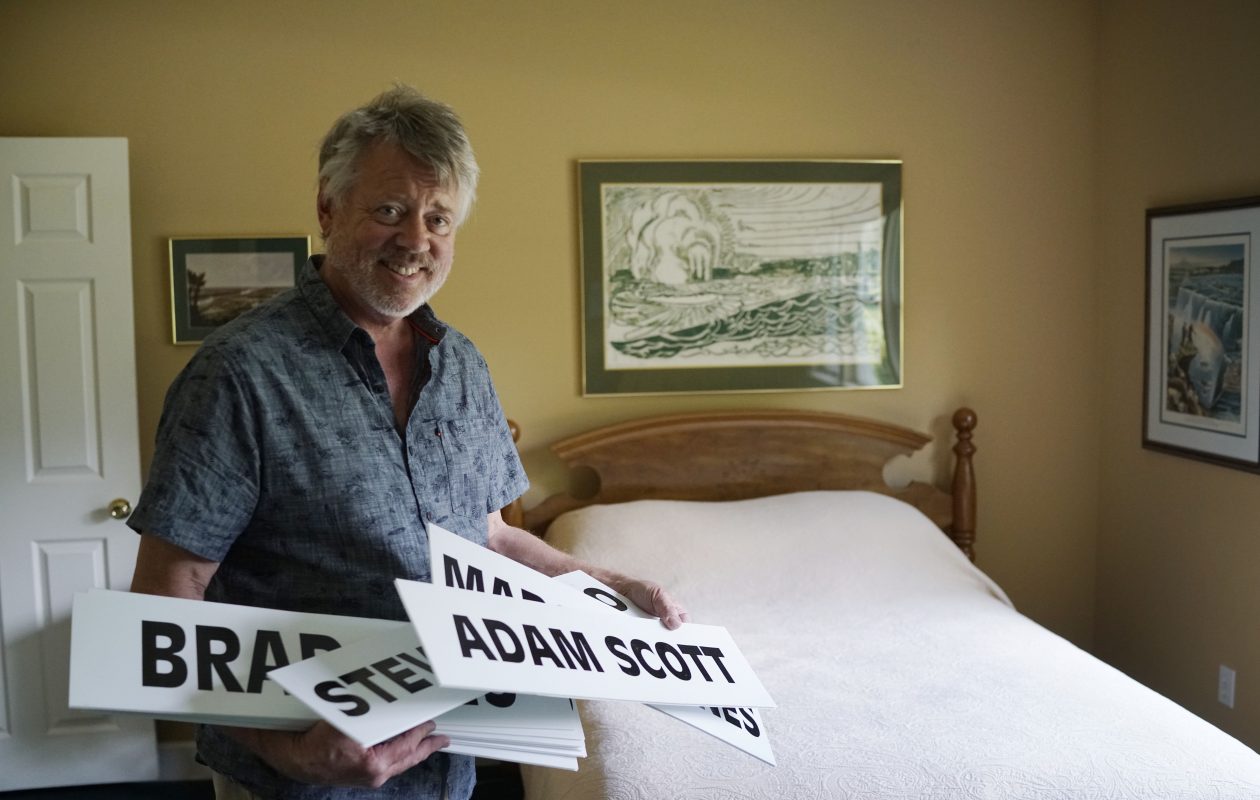 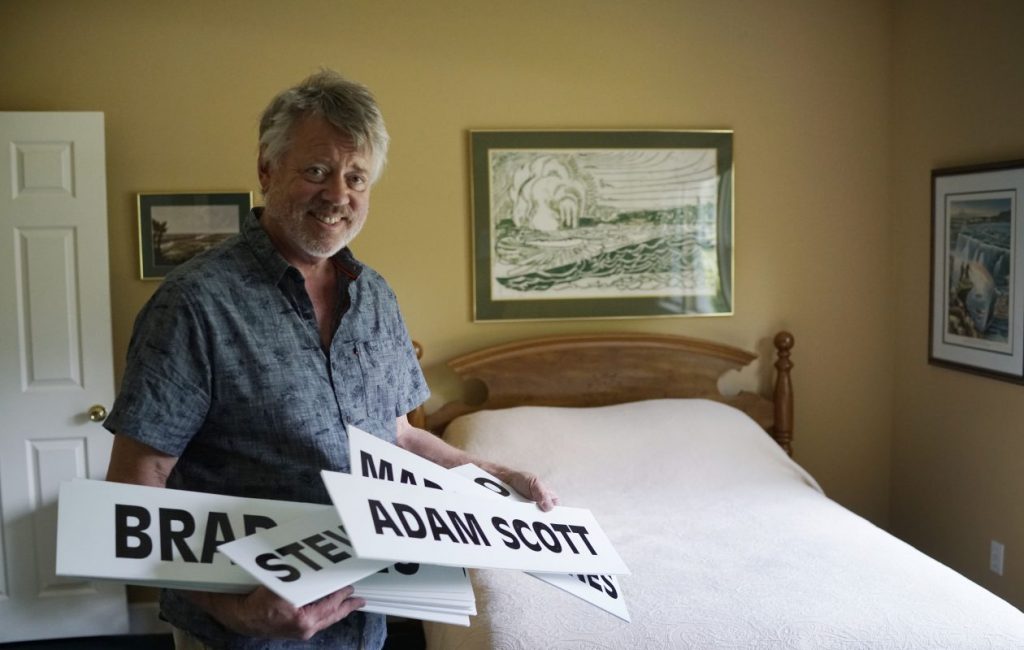 Craig Avery sorts through some of the scoreboard names he has collected of young golfers who have stayed at his Lewiston home during the Porter Cup over the years. (Derek Gee/Buffalo News)

Adam Scott showed up on the doorstep of Craig Avery’s Lewiston home for the first time 19 years ago.

It was 11 p.m. July 16, Scott’s 18th birthday, and he’d arrived for a weeklong stay at Avery’s place on Mountain View Drive while he played in the Porter Cup, an elite amateur golf tournament that attracts the top talent from around the globe.

Scott was traveling outside of Australia for the first time. All he had with him was his day bag. No luggage. No clubs. The airline company lost them on the way from Los Angeles International Airport.

Avery was panicked. Scott, not so much.

“He was adamant it would arrive the next day like he was promised at the airport,” Avery said. “He was an 18-year-old with no worries, and he had nothing. He was just chill.”

The clubs and luggage arrived right on cue the following morning and all ended up turning out just fine, but little did Avery know that he was housing a kid who would go on to win a Players Championship, a Masters and become one of the top golfers in the world.

The Porter Cup is a rite of passage for top collegiate and amateur golfers. A glance at the Official World Golf Ranking shows that many of today’s stars have passed through Niagara Falls Country Club while on their way to the PGA Tour.

Three of the PGA’s top 10 golfers – including No. 1 Dustin Johnson, No. 6 Jason Day and No. 10 Rickie Fowler – and 19 of the top 40 have made an appearance at the Porter Cup. Phil Mickelson tied for second in 1989 and won the crown the following year. Tiger Woods and his father, Earl, stayed with club member Dan Cantara in 1994.

“On any given Sunday you look on the screen and you see these kids you know,” Avery said. “It’s a really neat feeling.”

Longtime members Alan Elia and Avery are two of the 60 or 70 families at the club who open their doors, pantries and pocketbooks for strangers, some of whom they still keep in touch with to this day.

It didn’t take long for Avery, who has housed players since 1992, to hear again from Scott. He played in a couple more tournaments after the Porter Cup before heading to school in the fall at UNLV. 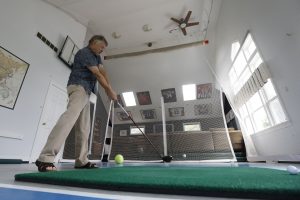 Craig Avery hits a gofl ball in the rec room of his Lewiston home where he and his family have hosted dozens of young golfers for the Porter Cup over the years, Tuesday, July 11, 2017. (Derek Gee/Buffalo News)

“He had to buy a car but didn’t know how to in America,” Avery said. “I called up a friend of mine in Las Vegas and he helped Adam out. He used to call us his ‘American parents.’ ”

Scott returned for his second Porter Cup in 1999 and continues to invite Avery to plenty of tournaments. He’s traveled with friends to TPC Sawgrass in Florida, the U.S. Open at Bethpage State Park on Long Island, Glen Abbey Golf Club near Toronto and more.

Elia has been a member of Niagara Falls Country Club his whole life. His parents hosted players when he was 8 or 9 years old until he left for college at Wake Forest. Elia resumed the family tradition in 1999 when he moved from Grand Island.

“When I moved back to Lewiston it was an easy thing to do,” Elia said. “I just have such fond memories of the guys being at the house.”

Many of the players Elia’s hosted share one common theme: They also went to Wake Forest.

Elia’s sister, Dena Armstrong, and niece, Cassie Stein, are both assistant tournament directors who are heavily involved in the housing process.

“They know my personality, outgoing, like to have fun,” Elia said. “So if there’s not a Wake Forest guy, they try to find someone that’s fun and would be good with my kids. I’m pretty sure we’re 100 percent with kids who’ve stayed with me have asked to stay at my house again if they come back.”

Elia’s able to house three or four kids in his place on Lower River Road. One player stays in his pool house. The others displace his kids to the couches.

Elia keeps in touch with Reifers, who has been on and off the PGA Tour. They met at a Wake Forest football game last year, and Reifers has stopped by a number of times. He also met on campus with Simpson, who wrote a letter of recommendation for Elia’s daughter to get into Wake Forest.

“It’s funny. I wish I’d done a better job of keeping track,” Elia said. “I keep track for a couple years but it sort of fades away.”

The schedule is usually jam-packed for the golfers and families involved.

Players typically show up Sunday, get a practice round in Monday and play in the Ham Am with a club member Tuesday. The first of four rounds starts Wednesday, and the tournament sponsors a barbecue, a ride on the Maid of the Mist, a dinner dance and an awards dinner after each day.

Elia also takes every guest to the Whirlpool Jet Boat tour and an occasional Artpark concert.

Each guy’s makeup is different and unique. Some are more fun and outgoing like Johnson. Others are more serious and religious like Simpson.

“They’re in your house for seven days, so you see their actual personality traits,” Elia said. “I certainly don’t equate people who go to bed early with better playing.”

Most of the participants pack up and head to their next tournament, but some do return to their host family the following year.

“These guys come back because it’s one of the top tournaments and every one of them notes that it’s a well-run tournament as well,” Elia said. “They come back for social aspects as much as they do for the tournament itself.”

“Golfers just love this tournament,” Avery said. “The community really rolls out the red carpet for these golfers.”

While competition is stiff on the course, there’s also one off of it between host families.

“People go to work early or get off early to adjust their schedule around their player’s tee times,” Avery said. “We call them ‘my guy.’ We all want our guys to win.”

Elia hosted 2007 Porter Cup champ Brian Harman, who won the Wells Fargo Championship in May. Avery’s Rodgers won the 2011 Porter Cup and returned in 2012 and 2013 before turning pro shortly thereafter.

“We’re real proud of them,” Avery said. “It feels like it’s your own son.”

Flanagan called Avery in 2003 from the U.S. Amateur Championship at Oakmont Country Club near Pittsburgh and invited him down to come watch the final round.

Avery witnessed Flanagan, then 19 years old, outlast Casey Wittenberg in the 37th hole of match play to become the first Australian in 100 years to win the event and the second-youngest champion to Tiger Woods, who was 18 when he won in 1994, the same year he finished tied for eighth at the Porter Cup.

A month prior, Wittenberg shot a 266 to win the Porter Cup, eight strokes ahead of Flanagan, who finished tied for 12th.

The victory earned Flanagan a spot in the 2004 Masters, which Avery attended the following April. He was also able to meet up with Scott, who was fresh off becoming the youngest golfer at the time to win the Players Championship.

“Great people are surrounded by great people,” Avery said. “The golfers we’ve been able to meet are super professionals, but great kids, too.”

The best part of keeping these relationships going is “probably going to a PGA event and being recognized and being included in these players’ day,” Avery said. “It’s the same thing if you knew a Buffalo Bill or Toronto Raptor. You’re hanging out with the guy everyone wants pictures and autographs with. It’s just cool.”