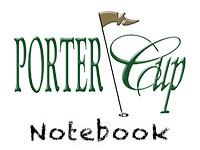 Scott Harvey’s dream of following in his father’s footsteps as Porter Cup champion likely ended on the back nine Friday at Niagara Falls Country Club.

Harvey struggled to a 6-over-par 41 coming in, leading a round of 4-over 74 that dropped him to 3-under 207 for the tournament, six shots off the lead.

Harvey, a 37-year-old from Kernersville, N.C., is attempting to become the first mid-amateur champion since Gene Elliott in 1998. That looks unlikely now after a tough stretch of holes that included a bogey on the par-5 11th hole and a double bogey on the par-4 15th, when his tee shot went out of bounds.

“I didn’t play any different, really, than I played any other day,” Harvey said. “I went for a couple things. Every time I messed up, it’s because I went for something and it just didn’t turn out. No. 11, I mean, that’s probably one of the easiest holes out here, and I bogey it every single day. That’s terrible. … It just kept escalating.”

Nevertheless, Harvey can solidify a top-five finish with a good showing in Saturday’s round. That would be even more of a resume-builder for this year’s Walker Cup team, which will be announced after the U.S. Amateur later this month.

The amateur version of the Ryder Cup, the biennial competition will be held Sept. 12-13 at Royal Lytham and St. Annes in England. Two spots on the American team are expected to go to mid-amateurs.

Harvey undoubtedly has the inside track on one, with his victory in last year’s United States Golf Association Mid-Amateur championship.

“That would be the biggest honor there is, to represent your country,” he said. “It’s the pinnacle of amateur golf. I wish I could make the decision, but it’s not my decision to make. I hope I make it, though.”

On Tuesday night at the player’s dinner, Harvey received the William McMahon Porter Cup Award. Given annually to the qualifying medalist of the U.S. Mid-Amateur, the award consists of a contribution to the winner’s charity of choice, as well as an exemption into next year’s Porter Cup.

The honor was especially significant for Harvey, whose late father, Dick, is the 1963 Porter Cup champion – one of more than 300 amateur titles he won.

“This is a special place,” Scott Harvey said. “I pick a schedule every year and this is going to be on it no matter what. It’s a special place for me any my family. … There’s no other tournament like it for me personally.”

Friday proved to be a better day for the six locals in the field. Silver Creek’s Jamie Miller rebounded from an 81 in the second round to card a 2-under 68 Friday that stood up as one of the best rounds of the morning and was just two shots off the best round of the day – a 4-under 66 by both Argentina’s Jaime Lopez Rivarola and William Gordon of Davidson, N.C. That moved them up 24 and 23 spots up the leader board, respectively.

Williamsville’s Jake Katz and East Amherst’s Ben Reichert each shot rounds of even-par 70 Friday, while Clarence’s Marc Holzhauer was 1-over 71.

Lewiston’s Mike Boss, the NFCC club champion, shot 5-over 75. The low score among locals for the tournament is held by East Amherst’s Danny Yustin, who is in a tie for 35th place at 3-over 313 after a round of 3-over 73 Friday.