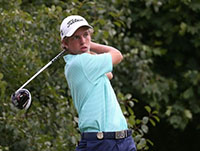 Marc Holzhauer of Clarence won the International Junior Masters in June and picked up an invitation to the Porter Cup. (James P. McCoy/Buffalo News)

It wasn’t long ago that Marc Holzhauer’s spot at the Porter Cup was next to the 18th green.

It was there that Holzhauer would watch some of the country’s best amateur players as they finished their rounds at Niagara Falls Country Club.

One day, Holzhauer hoped, that would be him out there.

That moment has arrived for the 17-year-old from Clarence, who’s playing in his first Porter Cup this year.

“It feels awesome to play in such a great event,” said Holzhauer, who was extended an invitation after his victory in the International Junior Masters last month. “I’ve come here for the last four or five years, so it felt really good to get the invite.”

Holzhauer played in the Porter Cup qualifying tournament just a few days after his IJM win, missing out on a playoff by one shot after making a bogey on the par-3 18th.

“Everyone kept telling me I was going to get in, but I didn’t know if I would,” he said.

The IJM winner doesn’t receive an official exemption into the Porter Cup, but each of the past two winners – Holzhauer and Pittsford’s Will Thomson in 2014 – have been invited. It helps that each of them have local ties, but it’s also a sign of a building relationship between the Porter Cup and Junior Masters.

“I really like playing with people watching and being part of such a great field,” Holzhauer said. “I didn’t play great today, but there’s two more days left. There’s a lot I can learn from watching these players and taking it to my other tournaments.”

Holzhauer is tied for 70th in the 78-player field after a round of 8-over 78 Thursday. Leading the six local players in the field is East Amherst’s Danny Yustin, who shot a 2-over 72 Thursday and is tied for 15th at even-par 140 through 36 holes.

East Amherst’s Ben Reichert also shot 2-over 72 Thursday and is at 4-over 144, while Lewiston’s Mike Boss and Williamsville’s Jake Katz each shot 5-over 75 in the second round. Silver Creek’s Jamie Miller carded an 81.

Kevin DeHuff got in the easy way this time.

A 22-year-old from Coto de Caza, Calif., DeHuff has made the cross-country trip the past two years to play in the Porter Cup’s qualifying tournament.

This year, however, the Pepperdine University graduate was extended an invitation to the field.

“I’m so happy to be back,” said DeHuff, who sits at 1-over 141 through 36 holes. “It’s definitely the most fun tournament I’ve ever played in. That’s definitely what keeps me coming back.

“The course is really fun to play. They get it tough. It’s not the toughest track to begin with, but they make it pretty difficult with the rough and everything.”

DeHuff, who’s ranked No. 367 by the Scratch Players World Amateur Ranking, finished in fourth place earlier this summer at the Monroe Invitational in Rochester. He’s playing in the Canadian Men’s Amateur Championship at Weston Golf Club in Toronto next month as one of his final amateur events before turning professional and attending Web.com Tour qualifying school in his home state in September.

As for how he makes traveling the country as an amateur work, DeHuff admitted his mother is “a saint.”

“Getting to do this is a blessing,” he said. “I love it here. I’m happy that I’m able to get back one more time before turning pro.”

The Porter Cup has some reinforcements this year. Members of the Niagara University women’s and men’s basketball teams are assisting with the operation of the tournament to earn credits with the School of Hospitality and Tourism. The student-athletes have worked in the bag room, updated the scoreboard and called in scores from various spots on the course, among other tasks. … Friday is Kids’ Day at the Porter Cup. Children 16 and under can register at the main scoreboard next to the 10th tee to receive a Porter Cup souvenir and be entered into a drawing for a grand prize. … New to the Porter Cup this year is a long-drive contest, which will be held at 5:30 p.m. Friday after the conclusion of the third round.