Ben Reichert’s first Porter Cup experience has given him a new outlook.

“I recognized that my game is a little bit closer to these guys than I thought,” said Reichert, a 17-year-old from East Amherst who plays out of Transit Valley Country Club. “I always looked up to these guys, and I’m getting to the point where it’s like, ‘Hey, I’m not that far behind these guys.”

Reichert finished his first Porter Cup with a round of 4-over 74 Saturday at Niagara Falls Country Club, struggling to a 5-over 40 going out, but coming in at 1-under on the back nine, including birdies on the par-4 15th and par-3 16th holes.

“It was a lot of fun. I enjoyed every part of it,” Reichert said. “Obviously I didn’t have my best day today, but I mean, if I just keep getting better and better, I think I’ll be able to take a run at this some day. I take a lot of positives out of this week going forward.”

Reichert, who will be a senior at Williamsville North, will play in the New York State Golf Association Junior Championship next week at Cedar Lake Club in Clayville. After that, he’ll participate in American Junior Golf Association events at Harvest Hill and in Rochester before school starts. He’s committed to attend East Tennessee State University. Coincidentally, Reichert played his final round Saturday with Chris Hickman, his future Buccaneers teammate. 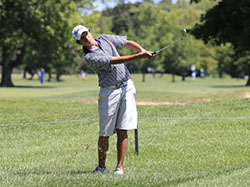 Ben Reichert of East Amherst had the chance to play with some of the best amateur golfers in the business this week at the Porter Cup. (Harry Scull Jr./Buffalo News)

“Any time you get to play in a field like this, it’s always good to see where your game compares and what you need to work on,” said East Amherst’s Danny Yustin, who played with Reichert in the final round. “For as young as he is, he’s going in the right direction.”

“It was a little disappointment,” Yustin said of his week. “The first round was awesome, but the next few rounds, I couldn’t get the juices going, putts weren’t falling and I didn’t get the bounces.”

Yustin did admit to feeling some added pressure to perform well, especially after his final-round 62 earlier this summer in the Eastern Amateur solidified that he’s got the type of talent to compete in these tournaments. An opening-round 68 had him in the running, but he wasn’t able to back that up.

Next up on his schedule is the Canadian Men’s Amateur, which will be Aug. 10-13 at Weston Golf and Country Club in Toronto. After that, he plans to explore his options regarding turning professional.

Lewiston’s Michael Boss, the NFCC club champion, shot 4-over 74 Saturday and 16-over 296 for the tournament, in a tie for 63rd.

Will Thomson, the 14-year-old from Pittsford who last year made history as the youngest-ever Porter Cup competitor, finished his second year at the tournament in a tie for 16th place after an even-par round of 70 to finish at 1-over 281 for the tournament.

“I thought it was a great experience,” Thomson said. “Definitely left a few shots out there, but overall I’m pretty happy with it. It was a lot of fun. This tournament is always great. It’s an honor to get invited back.”

Thomson didn’t stick around to see the end, as he was on his way to Texas for the 40th Junior PGA Championship, which begins Monday.

“It’s still a little different with everybody being so much older than you,” Thomson said of playing the Porter Cup. “I gained a lot of length and this course was a lot more comfortable for me this year. I was more comfortable with my game in general.”

Thomson will have an opportunity to work on his game full time, as his family plans to relocate to Naples, Fla., at the end of the month. He’ll start his freshman year of high school there in a few weeks, but still plans to play a summer schedule of tournaments in Buffalo and Rochester.

“There’s so much tradition here,” he said. “It’s such a fun tournament and the course is always great, so this is definitely something I’ll have on my list for as long as they invite me back.”

Mid-Amateur Mike McCoy finished his 16th Porter Cup in a tie for 32nd place after shooting a round of 5-over 75 Saturday.

McCoy, 52, is hopeful of securing the second mid-amateur spot on the U.S. Walker Cup team, which will compete against a team from Great Britain and Ireland on Sept. 12-13 at Royal Lytham and St. Annes in England.

“That’s one of the reasons I’m out here playing, is trying to earn that spot,” McCoy said. “It’s on my mind all the time, for sure. I’ve never played on the team, but I’ve tried hard for a lot of years. I’ve had two great years, so I hope I’m right in the mix.”

Hours after his round ended Friday, McCoy was on the putting green, with his customary cigar dangling from his mouth. The 2013 U.S. Mid-Amateur champion doesn’t have the length off the tee to compete with college kids, but makes up for it around the greens.

“I’m not quite as strong, but I have to make up for it with my putter and short game,” he said. “I’m playing good golf, and that’s all I can ask of myself.”