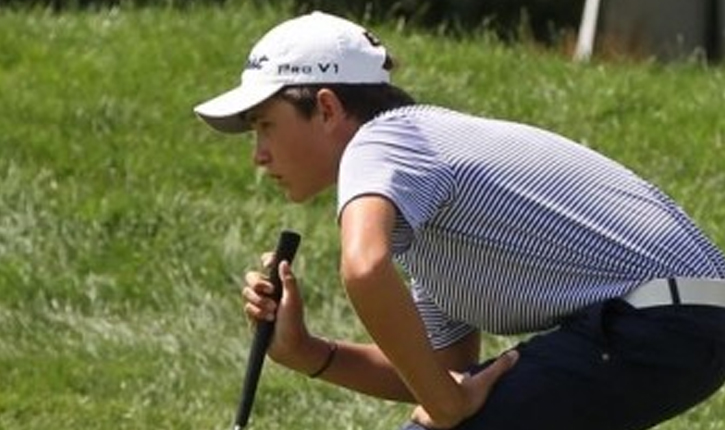 Steve Denn takes every invitation he gives out to the Porter Cup seriously.

Thirteen-year-old Will Thomson lines up his putt on the 18th green in the Porter Cup on Wednesday.
(James P. McCoy/ Buffalo News)

So when he offered one to 13-year-old Will Thomson, it wasn’t for publicity’s sake.

“I’m certainly going to go on merit,” Denn said. “I’m not going to say, ‘OK, a 13-year-old will be good for media and people coming out being curious.’ That’s not what motivates me.”

As such, Denn felt comfortable making Thomson the youngest player to ever play in the Porter Cup.

“I just felt that his game is ready,” Denn said.

Thomson proved that earlier this month by becoming the youngest player to ever qualify for the U.S. Amateur. He did so by beating fellow Pittsford resident Gavin Hall – the leader after Wednesday’s first round at Niagara Falls Country Club – by four shots during a qualifying tournament at Mendon Golf Club.

Earlier this summer, Thomson won the International Junior Masters at East Aurora Country Club. He’s also the reigning New York State boys (ages 14 and under) champion. In addition, there is a regional appeal to him being from the Rochester area.

“I wasn’t expecting it at all,” Thomson said of the invitation. “It was a really big surprise to me. After the U.S. Am qualifier, they called and my dad was yelling to me, saying the Porter Cup wanted to invite me. I thought he was kidding at first. When it ended up being real, I was just shocked.”

Thomson, who admitted to being a little intimidated by the field, shot 3-over 73 in the first round, and is in a tie for 54th place.

Thomson isn’t the only player in the field to set a Porter Cup record. Mid-amateur Mike McCoy, a 51-year-old from West Des Moines, Iowa, is playing in his 15th Porter Cup, believed to be the most ever.

“I’ve enjoyed coming up here,” McCoy said. “I look forward to it every year. It’s always a competitive tournament, and there are great sights to see. It’s kind of a relaxed atmosphere, even though there is keen competition. Everybody’s having a good time.”

Back in April, McCoy got the experience of a lifetime. His victory in the 2013 U.S. Mid-Amateur championship gave him an invitation to the Masters.

“It was a great week. I wish the golf had been a little better, but they went out of their way to make sure we had a special experience,” McCoy said. “It was everything you can imagine. It was Disneyland – not a blade of grass was out of place.”

McCoy’s son, Nate, caddied for him making the trip even more special. Nate McCoy is currently playing on the Canadian PGA Tour.

For the first time this year, players at the Porter Cup are able to use distance-measuring devices. That’s in step with a United States Golf Association ruling back in February that allowed the use of such devices in amateur events.

The scoring average for the 75-player field was 71.33. The easiest hole was the par-5 third, which played to a stroke average of 4.55, while the par-4 17th hole played to an average of 4.55 strokes, making it the most difficult on a cool, blustery day.