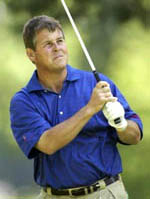 LEWISTON  Jim Holtgrieve is more than just an interested spectator at this years Porter Cup.

The captain of this years United States Walker Cup team is on a scouting mission.

Holtgrieve is looking to fill out the final five spots on the American side for the biennial event against Great Britain and Ireland. This years match, which will be the 44th played, will be held Sept. 7-8 at the National Golf Links of America in Southampton  site of the inaugural Walker Cup in 1922.

Its coming down to the very end, said Holtgrieve, who captained the American team in a losing effort in 2011. There are some really hard decisions to make.

My goodness, these guys are so good, he said. When you go to watch them play, particularly at tournaments like the Porter Cup, they all hit it so well. There are some guys who probably should be on the team, but for one reason or another, theyre not going to make it.

Holtgrieve said hes interested in not just a players ability, but on their composure on the course.

In a tough situation, how do they handle themselves? How do they manage their game? Because its not just about the talent, its about representing the United States of America, which is a big thing for me, he said.

When the Walker Cup started, it was all about building relationships and using the game of golf to do that. It was about bring two continents together after World War I, Holtgrieve said. If we dont keep getting mid-ams, maybe that tradition doesnt get passed along. I dont want the Walker Cup to be a stepping-stone to the professional ranks. To me, its all about building relationships.

Last week, five players were named to the squad  Patrick Rodgers, Max Homa, Michael Kim, Justin Thomas and Cory Whitsett. Two of them  Rodgers and Homa  are in this weeks Porter Cup field.

Holtgrieve will attend the Western Amateur and U.S. Amateur before naming the final five members of the team. The mid-amateurs in the field this week recognize the opportunity before them.

Ive played a few more tournaments and done a lot more traveling. Ive found myself getting a little bit worn out at this point, said 35-year-old Scott Harvey of Greensboro, N.C. Ive changed some of the state stuff I usually play to more national events.

Harvey is tied for 25th through the first two rounds this week, at 1-over 141 after a 69 Thursday. The low mid-amateur in the field is 34-year-old Nick Gilliam of Gainesville, Fla., who is tied for 21 at even par.

Theres a lot of excitement among the mid-ams, for sure. Everybodys working hard for it and playing a lot more golf. It puts a little pressure on everybody, Harvey said. It doesnt matter who makes it  whether its me or somebody else  its a great thing. That is the pinnacle of amateur golf, for sure. It would definitely be an honor, to be able to represent your country.

The perceived favorite for one of the spots is 34-year-old Nathan Smith of Pittsburgh. Hes played on the last two Walker Cup teams and won the 2012 U.S. Mid-Amateur, becoming the first player to win that event four times. That earned him a spot in this years Masters Tournament.

Smith, though, is struggling this week, at 10-over par through two rounds.

The decision to have two mid-amateurs on the team is not permanent. Holtgrieve said the USGA will revisit the decision after this years match, but hes not worried about older players being able to keep up with their younger competition.

I think they can do it. National Golf Links isnt a really long course, so Im not worried about that, he said. I think its good for the game.

Mid-amateur Tripp Davis is realistic about his chances for the Walker Cup, saying he hasnt played enough golf to take a serious run at it this season. Davis owns Tripp Davis & Associates, a golf architecture firm based in Oklahoma.

His company redesigned the par-4 second hole at Niagara Falls Country Club. The hole opened last season in the Porter Cup, but Davis wasnt in the field. Hes back this year for his 11th Porter Cup.

Even though he knows the hole better than anyone else, Davis bogeyed it in the first round Wednesday.

I birdied it today, though, he said with a laugh after his second round. I guess Im a quick study.

East Amhersts Patrick Sheedy Jr. tied for the low round of the day, carding a 5-under 65. That moved him all the way up from a tie for 70th to a tie for 25th.

Sheedy is tied for the low local score in the field with Buffalos Michael Carrig, who shot a 1-under 69 Thursday and is at 1-over 141 through two rounds.