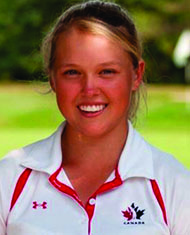 This year’s 54 hole event has Tournament Chairman Brian Oakley all excited and ready to go. “We are thrilled to be hosting some of the top female amateur golfers in the world here at Niagara Falls Country Club” he said.

In addition Oakley is enthused that the field is almost doubled from last year’s inaugural event total of 39.

Leading the way will be the entire Canadian National team led by Brooke Henderson (right) currently ranked #3 in the world.

Other international stars include two up and coming Phillipine players Pauline DelRosario and Princess Superal.

Among local standouts competing will be Cat Peters currently a member of the University of Michigan women’s team and Rene Sobolewski of Vanderbilt University.