Rags to riches: Russell Bowie goes from 8 to ace at Porter Cup

There’s really only one way to bounce back from a snowman. 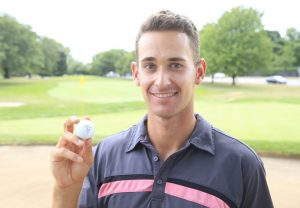 Russell Bowie made a hole-in-one on the 18th hole Thursday during the second round of the Porter Cup. (Harry Scull Jr./Buffalo News)

Step onto the next tee and knock it in for an ace.

That’s what Russell Bowie of Mississauga did Thursday during the second round of the Porter Cup. After a quadruple-bogey 8 on the par-4 17th hole, Bowie knocked it in for a hole-in-one on the par-3 18th with a 7-iron from 162 yards.

“To be honest, I wasn’t aiming at the pin,” he said. “I kind of blocked it out a bit to the right, because it was a really tucked pin today. Got a really good bounce off the hill and went in. Definitely a good way to end the round.”

It was Bowie’s third career hole-in-one, but first in competition. He finished with around of 1-over 71.

“I played really well, other than that horrible 8 on 17,” he said. “I don’t know if anyone has had such a big stroke swing from one hole to the next.”

Bowie, 24, is playing in his second Porter Cup. He’s currently tied for 37th at 2-over 132 through two rounds.