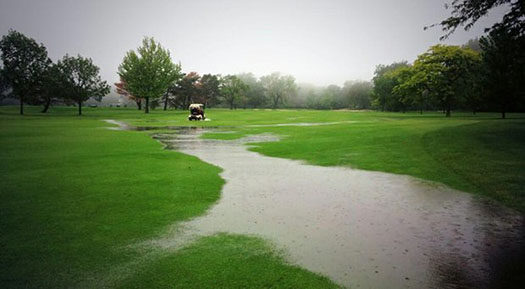 From Lewiston to Merion, Mother Nature is effecting play all over the country Thursday.

The Women’s Porter Cup was in a two-hour weather delay at 8:30 this morning. Less than an hour later, it was decided that play would be cancelled for the day.

Therefore, the inaugural Women’s Porter Cup will be shortened to 36 holes after rain fell from the middle of the night to about 10 a.m. It’s not raining too heavy anymore, but it’s still a constant drizzle.

There has been so much rain at Niagara Falls Country Club this year that the grounds crew’s rain gauge is broken. So they can’t tell how much rain has fallen, but it’s a lot.

The day won’t be a waste for the women. They will head to the Maid of the Mist this afternoon, a boat ride that takes you under Niagara Falls. More rain – or in this case – a lot of water.

Play will resume Friday at 8 a.m. The players might tee off on No. 10 for the start of the final round, as the back nine dries out more quickly – giving the grounds crew more time to work on the front nine, if needed.