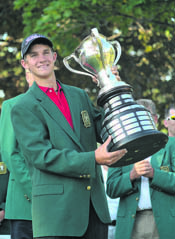 Not yet old enough to drink, Patrick Rodgers was the center of attention on the 19th hole.

“I’m going to enjoy this one, because it was a lot of fun,” Rodgers said. “One of the best fields in amateur golf, and to be the champion is awesome.”

The putt capped a scintillating finish in which Rodgers overcame a seven-stroke deficit with eight holes left to play.

As they walked to the 11th hole, Rodgers’ caddy, Tom Maples, marched past the tee box, set his bag down in the shade, dropped down to one knee, and began ruminating the long ride back to Avon, Ind. that was ahead of him.

Maples was Rodgers’ golf and basketball coach in high school, and he had accompanied him to a handful of events this summer. Rodgers finished in the top five at the Northeast Amateur and the Players Amateur, which, combined with his Porter Cup score, gave him the William C. Campbell Award. But before Saturday, he had yet to give his best performance on the final day.

After taking a brief lead during the third round, Rodgers came in to Saturday one shot behind pace-setter Paul Haley at 10-under par. But while Bryan birdied six of the first eight holes in the final round to get to 14-under, Rodgers made bogeys on holes No. 7, 9 and 10, and seemed out of contention. As Rodgers waited to tee off on No. 11, Maples buried his head in a towel and wondered, “Is this kid ever going to pull one of these out?”

Two big swings later, Rodgers tapped in for eagle, turned to Maples and said, “I’m not out of this yet.” “At that point, I wasn’t really focused so much on winning the golf tournament, just getting myself back on track,” Rodgers said later. “I knew it would take something pretty special for me to win.”

After a par on No. 12, Rodgers approached the 576-yard No. 13 and requested his driver, a calculated risk considering the creek dissecting the fairway. “Absolutely,” Maples said.

“I kind of laid up from there earlier in the week,” Rodgers said. “I knew I had to go for it.”

Rodgers followed up with a 3-wood from 275 yards out to the middle of the green and dropped in an 18-foot putt for his second eagle of the round — and the tournament. Meanwhile, Bryan, who got to 15-under after lipping out an eagle putt on No. 11, pushed an eight-footer past the hole on 13 and took a bogey.

The three-shot swing brought Rodgers within three strokes of the lead, tied for second with Haley, the tournament leader after the first three rounds.

Bryan made another bogey on the par-4 14th hole, while Haley made a birdie and Rodgers skirted the hole on his chance to close the gap. All three players parred No. 15.

“I knew if I get one or two birdies I might have a good chance,” Rodgers said.

Rodgers got that birdie on the par-3 16th hole. He claimed a share of the lead on the par-4 17th when Bryan put his tee shot in the sand, went bunker to bunker with his next swing, and missed a short par putt. Haley also bogeyed No. 17.

With the tournament up for grabs on the final hole, all three players put their tee shots pin high on the par-3 18th. Bryan’s was the closest to the cup. Haley took himself out of contention with a missed birdie putt. Rodgers went next, circling the green several times to set up his line, but ultimately rolled his putt too slowly. Bryan got closer with his left-to-right, eight-foot putt, but his shot at victory circled around the left edge.

Both in the clubhouse at 12-under 268 after four rounds, Rodgers and Bryan walked back to the 18th tee, stride for stride, to begin the playoff. Both hit six-irons again. Bryan put his shot in the right greenside bunker. Rodgers plopped his ball down in the middle of the green. Bryan blasted out of the sand to set up a makeable par putt, but Rodgers never gave him the chance to try and make it.

After accepting the Porter Cup, slipping into his new green jacket, and graciously thanking the staff at NFCC, rules officials, fellow players, his caddy, and his parents, Rodgers said the gallery lining the fairways during his final round was the biggest he had every played in front of, and that he was very nervous coming down the stretch, even if his play didn’t suggest as much. One of the older players then walked up and began pouring champagne into the cup. Rodgers nervously took a sip. “First one of my life,” he said. “Pretty good.”

The first victory of his amateur golf career tasted even better.