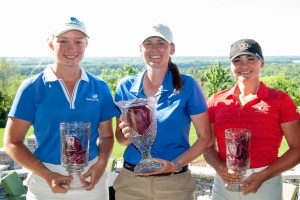 LEWISTON — The best thing about golf is there’s almost always another shot.

Save for a few very famous instances — think Dustin Johnson at the 2015 U.S. Open — the world’s most frustrating sport typically has the decency to offer a chance at redemption, as Jackie Rogowicz found out Friday at Niagara Falls Country Club.

Rogowicz, from Yardley, Pennsylvania, coughed up a two-stroke lead on the final hole of regulation but recovered in a playoff, beating Australia’s Isabelle Taylor for the trophy at the seventh instillation of the Women’s Porter Cup.

Rogowicz went into the par-3 18th looking to make history. Even a bogey would’ve set a tournament record (9-under) and likely captured the trophy. Instead, her tee shot found one of the many bunkers surrounding the green, and she failed on her first attempt to chip out, dropping a stroke. Another chip and two putts later, she had double bogeyed, allowing Taylor to pull even with a simple par. Both finished at 8-under, tying four previous champions.

The duo returned to 18 for the playoff, with Taylor leading off. This time, she found a bunker, and Rogowicz made sure to get enough of her tee shot to make it safely on the green.

“I was in between clubs, and I just don’t think I made a confident swing with my second choice (a 9-iron),” Rogowicz said of her first try on 18.

In the playoff, she stuck with the 9-iron, with a much different result.

“I just told myself that it was the right club,” she said.

Rogowicz was able to two-putt for par, and Taylor’s chip from the sand caught a little too much rough, leaving her with a try from the fringe to tie, which fell short.

“I kind of thought of it as redemption,” Rogowicz said. “Like, I wanted to play (18) again. I didn’t want to go play No. 1, which sometimes happens in the playoff. I wanted to redo it, basically.”

Early in Friday’s round, Rogowicz, who just wrapped up her collegiate career at Penn State, appeared to be putting the finishing touches on the most dominant WPC run to date, up five strokes through seven holes. After shooting a 4-over 40 on her first nine holes of Wednesday’s opening round, Rogowicz went 15-under with just one bogey over the next 36. She sat at 11-under entering Friday’s back nine, on pace to demolish the tournament record.

On the back nine, birdies became pars, and some pars became bogeys. Rogowicz dropped a shot on the par-5 11th, and Taylor picked up two more with back-to-back birdies on Nos. 13 and 14.

Rogowicz admitted she could feel the pressure building.

“(Taylor) was like, inching her way closer,” Rogowicz said, “so it got a little bit more difficult to kind of finish out.”

The duo traded missed opportunities for the next few holes. Taylor missed what would’ve been a third straight birdie when an 8-foot putt wouldn’t drop on 15. Rogowicz missed a 10-foot birdie try on 16, and Taylor hit an even tougher putt to save par.

On the par-5 17th, Rogowicz’s second shot went way left, landing beneath the low branches of a tree. She was forced to chip out, chip on and bury a clutch 11-foot putt to save par. Taylor couldn’t take advantage, hitting her second shot into the short bunker, leaving her chip short and missing a birdie putt from the fringe.

The victory improves on an impressive Women’s Porter Cup career for Rogowicz, who finished sixth, tied for fifth, and 16th in her previous three tries.

The two might resume their battle next year. Rogowicz, who graduated with a degree in finance, said she plans to continue playing as an amateur, while Taylor, playing in her first few American tournaments, will be a freshman this fall at Oregon State.