Shin jumps into Porter Cup lead with a 64 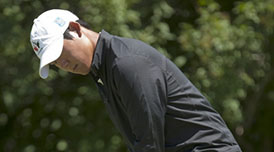 LEWISTON — Cool temperatures and a tricky wind befuddled the majority of players in the first round of the Porter Cup on Wednesday. 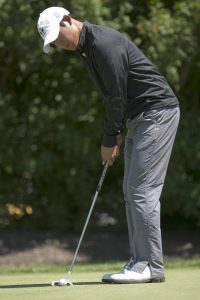 Justin Shin had never shot a 29 before Wednesday. He birdied five of the final six holes. (Matthew Masin/Buffalo News)

Justin Shin, however, had no trouble getting acclimated to the conditions, firing a 6-under-par round of 64 that included a 29 on the back nine at Niagara Falls Country Club. That was good for a one-stroke lead over both Tyler Dunlap and Beau Hossler.

“It was tough out there,” said Shin, a 21-year-old from nearby Hamilton, Ont. “When I played the practice round, it wasn’t windy at all. As soon as I teed off, though, it was really windy. Some of the hole locations were really difficult, too. I thought if I shot 2 or 3 under, that would be a good score, but somehow I shot 6 under, so I’ll take that.”

Shin made the turn at even par but got things started with a birdie at the par-4 10th hole. He missed an opportunity at the par-5 11th by making par, but Shin closed with birdies on five of the final six holes.

“I didn’t expect it,” Shin said of shooting 29, which he had never done before. “I wasn’t thinking about it. I was just trying to make as many birdies as I can.”

Shin’s precision driving of the ball and timely putting set up his impressive round. On the only hole in the final six that he failed to birdie, the par-3 16th, he started to walk home the putt before it somehow stayed out of the hole.

“It just trickled off to the left side,” he said, “but I finished birdie-birdie after that.”

Not bad for a round that almost never got started.

Shin is commuting daily from Hamilton, and he almost missed his 8:50 a.m. tee time Wednesday. He finished his collegiate career at New Mexico State in the spring and has a student visa. That has created some border-crossing troubles.

“I was late for the Ham-Am on Tuesday because I was stuck at the border for an hour. I barely made it,” he said. “Even today, I was stuck for like 40 minutes. I had only a 20-minute warm-up and just went out there and played. No expectations, just go play.”

Shin won the prestigious Northeast Amateur in 2012. While he’s ranked just 129th in the Scratch Players World Amateur Rankings, he has been in good form lately. He missed out on a playoff for a qualifying spot in the PGA Tour’s RBC Canadian Open by just a stroke Monday after shooting a 67 at Heron Point Golf Links.

“It felt really great,” he said. “The RBC would have been great, it’s a pro tournament, but the Porter Cup is a top-five amateur tournament. I’m definitely happy to be here.”

Shin saw his number stand up on a day in which several players said the 6,874-yard, par-70 layout was playing longer than usual.

“It was really windy on the front side. I had a lot of long irons into the greens,” said Dunlap, who like Shin shot even on the front. “On the back side, I put the ball in play off the tee pretty well and had a lot of wedges. You can capitalize on the par 5s.”

The 20-year-old junior at Texas A&M did that by making birdie at the par-5 11th and 13th holes on his way to a back-nine 30. Dunlap, who finished tied for fifth last year in his first Porter Cup, closed his first round Wednesday with a birdie on the par-3 18th hole, hitting a 6-iron to 15 feet on the 189-yard hole and converting the putt.

“You have to keep the ball below the hole and not short side yourself,” he said. “It’s a good start, but there are so many good players here that you’ve got to keep your head down and keep plugging away. It’s a long tournament.”

Hossler, an 18-year-old from Mission Viejo, Calif., made an eagle on the par-5 third hole when he hit a 3-wood on his second shot from 270 yards out to within a foot of the hole. He followed that with a 20-foot birdie putt on the par-4 fourth hole, finishing with a round of 65.

“I figured anything under par was in contention,” he said. “Whether you’re leading by three or three behind after the first round, it really doesn’t’ matter. There’s a long way to go, especially on this golf course because the scores are going to keep getting lower and lower. I’m very happy with the position I’m in.”

Hossler played in one of the marquee groupings, along with Gavin Hall, the 18-year-old from Pittsford, and English player Charlie Bull. Hall, who will be a teammate of Hossler’s in the fall at Texas, shot an opening-round 68 that has him four shots back.

“I had a few opportunities I left out there, but I was pleased with the round,” Hall said. “It’s a good start to the week. Playing with Beau and watching his 65 was great. I’m just hoping I can keep up with him.”

Defending champion Richy Werenski opened with an even-par round of 70, in a group tied for 16th place that includes Max Homa, the 2013 NCAA individual champion.

The second round begins today at 8 a.m.