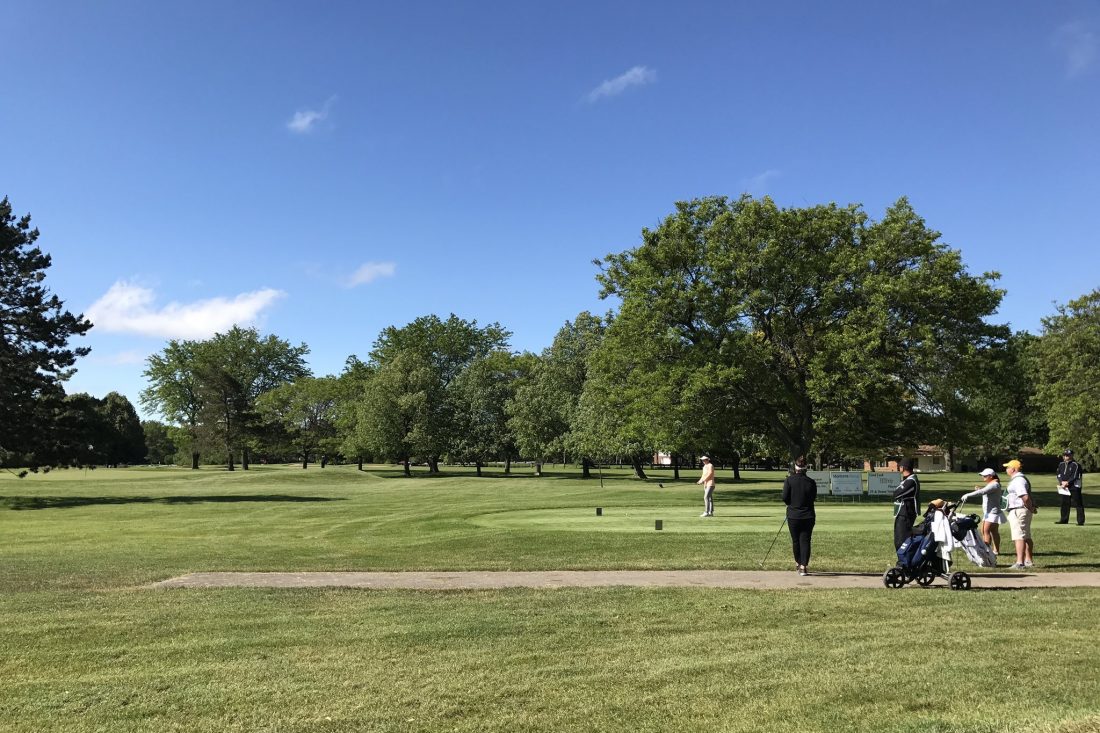 The final round of the Women’s Porter Cup tees off Friday morning at Niagara Falls Country Club.

Marika and Mika Liu haven’t lived together for over 10 years, the sisters being six years apart and both attending high school at IMG Academy in Florida, a country away from their Beverly Hills, Calif., home.

Marika, a 2015 graduate of Yale, hasn’t taken a collegiate golf swing in over two years. Mika has yet to take one, her freshman year at Stanford awaiting this fall. Yet it’s the older sister caddying for the younger at the 2017 Women’s Porter Cup, as two knee sprains forced Marika to withdraw from the event shortly into Wednesday’s first round.

Now Mika shoulders the family’s lone hopes for a championship heading into Friday’s final round at Niagara Falls Country Club. She sits a mere three strokes off the lead in a tie for fourth after a second-round, 2-under 70 brought her back to even par overall.

Canada’s Naomi Ko and Pennsylvania’s Lauren Waller share the lead at 3-under par, while Lois Kaye Go of the Philippines stands 1 under in third place. Right behind them, though, is the soon-to-be college freshman, reunited with her sister for one final charge at the Porter Cup title.

“She’s literally my cheerful bubble,” Mika said of her sister, “and she gives really good advice, too.”

Mika is the youngest of four children, the three elders all former or current Ivy League golfers. Marika received Ivy League Player of the Year honors as a senior with the Bulldogs. The oldest Liu, their brother Seiji, played at Harvard and graduated in 2014. Seiya, the second-youngest sibling, just finished his sophomore year on the Harvard men’s golf team. All three started with tennis, not golf, only Mika choosing a club over a racket to begin her athletic career.

She saw where golf led her older siblings and decided she too would try to make the game more than a hobby. The Liu household was mostly devoid of the boisterous competition one would expect in a family where four children all played the same sport at a relatively similar skill level, and Mika absorbed advice from her brothers and sister to become one of the top women’s amateur golfers in the world (she’s currently 35th in the Women’s World Amateur Golf Ranking).

“She has a leg up because she’s gone through golf more head-on, versus us, we started with tennis,” Marika said. “She has really all the training and all the know-how that we’ve passed down to her. … It’s really great just being on her bag, seeing how she plays now that she’s grown up.”

Mika has traveled the world to play in the Junior Solheim Cup and the Curtis Cup, two of golf’s top amateur tournaments. Her older siblings never bounced around the globe because of their talents on the course. It’s the three older siblings, Marika said, who now have a lot to learn from the youngest, even before she heads off to play for a Stanford team that ranked No. 2 in the nation last season.

“Mika has has significant experience both here in the U.S. and also abroad … she is a seasoned junior golfer,” Stanford head coach Anne Walker said in an email. “I think this will help make her transition to college golf easier and allow her to compete every week in our lineup.”

Asked who the best golfer of the four siblings is right now, Mika paused before explaining her oldest brother no longer plays as much, as if to justify why she at least tops him. Then she flashed a wide grin. “I would say right now maybe I’m the best,” she beamed. Marika declined to comment on the matter, through laughter, as her younger sister walked by to listen to her answer.

As the two others in Mika’s group headed their respective ways after filing their official scorecards and mingling with family in attendance, Mika followed the rock pathway to the front of the clubhouse and the putting green. She honed in on the ball at her feet on the fringe of the green, grasping her putter, while three groups remained elsewhere on the course. Mika was all alone, as she hopes is the case atop the leaderboard come the final round’s conclusion.